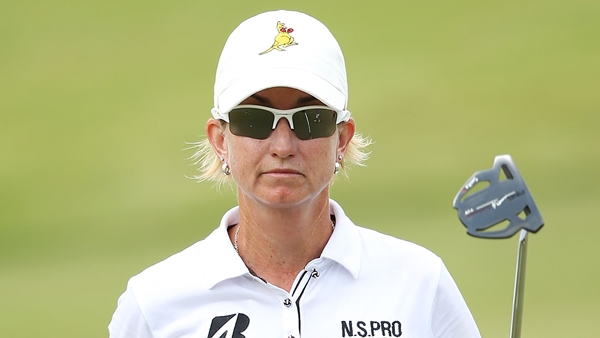 SINGAPORE – Karrie Webb and Angela Stanford were so close down the stretch Saturday at the HSBC Women’s Champions, matching each other birdie for birdie, that Stanford only sees one way to get the advantage in Sunday’s final round.

“I’m going to send Webbie a six-pack (of beer) tonight,” she said.

The two players set up a showdown between former HSBC champions after finishing off their third rounds with identical birdies over three of the last five holes Saturday to separate themselves slightly from the rest of the crowded leaderboard.

They both have a chance to be the first repeat champion of the tournament, although on two different courses. Both players picked up their first HSBC crown at Singapore’s Tanah Merah Country Club and this year’s event is being played at the Sentosa Golf Club.

Still, Stanford said, there are enough other quality players within striking range after a momentum-shifting day that anybody could claim the title.

“It’s really not worth looking at (the leaderboard),” she said. “You just know a lot of people are going to be at the top.”

Among those chasing Webb and Stanford are Spain’s Azahara Munoz, who fired an eagle and four birdies for a 5-under 67, the low round of the day; and Taiwan’s Teresa Lu, who gave up her LPGA membership in 2010 to concentrate on playing in Japan. Both are tied for third at 8-under 208.

America’s Paula Creamer, who briefly held the lead with Webb and Munoz on Saturday, had six birdies to go with three bogeys to sit in fifth place at 7 under.

Morgan Pressel of the United States was at 6 under, Norway’s Suzann Pettersen was another stroke back at 5 under, and Sweden’s Caroline Hedwall and South Korea’s Na Yeon Choi were in joint eighth at 4 under.

Webb, a seven-time major winner, led the first two rounds in Singapore, but started out slowly on Saturday. She played her front nine at even par and then bogeyed the 10th hole to go to 1 over, allowing the rest of the field to close the gap.

“Even when I was not giving myself a lot of good birdie opportunities early on, I had to tell myself it’s Saturday, there’s plenty of golf left to be played and just to be patient,” she said. “And fortunately I listened to myself for a change.”

Webb turned it around on the 153-yard, par-3 14th hole, where she struck her tee shot to within a couple feet of the hole for an easy birdie putt. Next came a chip shot from the fairway on the 16th which rolled in for birdie to give her a two-stroke lead again.

Stanford stayed with Webb, though, as the other challengers fell back. Not to be outdone on the 14th, the American placed her tee shot even closer than Webb’s – a mere inches – leading to birdie. She matched Webb’s birdie again on the 16th, and both players closed the round with birdies on the 18th.

If either veteran slips in the final round, however, Munoz and Lu are right behind them.

Both players are looking for their second LPGA titles. Munoz captured her only tournament at the 2012 Sybase Match Play Championship, while Lu won hers at last year’s Mizuno Classic.

Defending champion Stacy Lewis’ disappointing week, meanwhile, looks likely to end her streak of 13 consecutive top-10 finishes on the LPGA Tour. Lewis shot a 73 on Saturday, leaving her far down the leaderboard in joint-42nd place.

Lewis, the reigning Women’s British Open champion, is only three away from matching Webb’s LPGA record of 16 consecutive top-10 finishes, set in 1998-99.