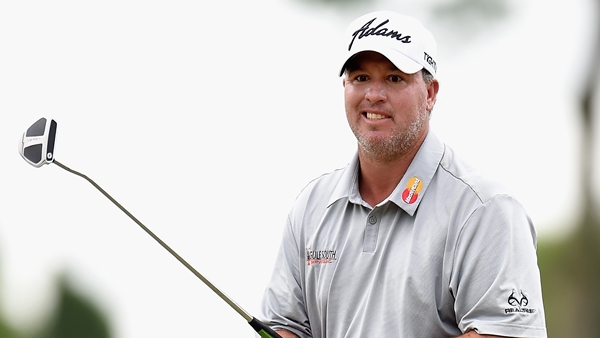 A day after changing the shafts in his irons, Weekley shot an 8-under 64 on Thursday in the Zurich Classic of New Orleans for a share of the first-round lead with Brendon de Jonge.

“You go to tinkering around with clubs and you finally find a shaft, and (True Temper) finally stepped up and built me a set of clubs and they worked,” said Weekley, the three-time PGA Tour winner who missed the cuts in four of his past six tournaments. “I’ve been missing something in my game, and it was because I (haven’t) been able to control my irons. It just starts messing with you mentally.”

Weekley had an eagle, seven birdies and a bogey at rain-softened TPC Louisiana. De Jonge, from Zimbabwe, had eight birdies in a bogey-free round.

Tour rookie Mark Hubbard had five consecutive birdies in the middle of his round and finished with a 66. He was tied with Erik Compton, Brian Davis, Greg Owen and Daniel Berger.

Dustin Johnson, ranked No. 7 in the world, was at 67 in a large group that included former Zurich winner K.J. Choi and Jason Day, the highest ranked player in the field at No. 6.

Weekley, from Milton, Florida, played in front of a number of family and friends. He eagled the par-5 second hole and added birdies on the fifth and eighth holes. He bogeyed the ninth, but rallied with birdies on Nos. 11-13 and closed with a birdie on the par-5 18th.

“I felt like if the putts would have fallen that I hit, I felt like it could have been a 59 easy,” Weekley said after posting his lowest score in more than two years. “I felt like I should have easily shot 8-under on the front side.”

De Jonge, starting on the back nine, birdied three consecutive holes after a par on his first hole and made the turn at 4 under. He had four straight birdies on the back, but failed to birdie the par-5 eighth.

“I left a couple of shots on the par 5s but made it up on the par 4s,” said de Jonge, who added he has never played well at TPC New Orleans. “The course was there for the taking. You’ve obviously got to hit the fairways, but the tour let us play (lift, clean and place), so that was the key out there today.”

O’Hair was 3 under after his first two holes, including an eagle on the first when he knocked in his second shot from 123 yards. He was 7 under through his first 11 holes, but bogeyed the 12th before closing with a birdie on the 18th.

“I kind of caught myself pressing on the back nine,” said O’Hair, who has two top 10s in his past four tournaments, including a sixth-place finishes this past week at the RBC Heritage. “Once I got to 7 (under) I was kind of pushing a little bit, forcing a little bit on the greens.”

Players were allowed to lift, clean and place their balls in anticipation of showers that arrived in mid- afternoon, suspending play for 1 hour, 18 minutes. A calm wind for much of the day along with soft greens left the course defenseless.

“Hopefully, the weather (Friday) will be good,” Day said after a round in which he hit two balls in the water on the par-3 third for a double-bogey 5 and followed with a bogey on the fourth hole. “It will be good to see the course dry out, and obviously when the weather comes in it’s no fun for anyone.”