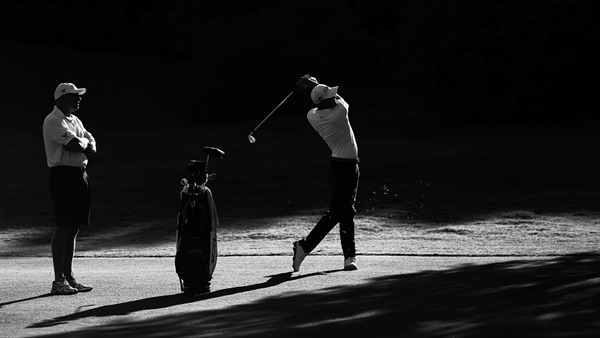 HONOLULU –  For the first time since Colonial in 2011, Adam Scott will have a new caddie on the bag this week at the Sony Open.

No, Steve Williams is not ready to retire.

Williams called it the start of his semi-retirement. He has talked about cutting back on his schedule in the next year or two, though it would seem peculiar to come all the way to Hawaii just for one week.

“He’s chomping at the bit to have a go,” Scott said. “He’s earned it. I’ll let him drive one week, as long as he comes back.”

That won’t be until the Honda Classic. For the Sony Open, the Masters champion will have a friend on the bag.

AUSTIN NOT READY FOR CHAMPIONS TOUR: Woody Austin didn’t make it to the PGA Tour until he was 30, and only then after a decade of playing mini-tours, working as a bank teller and even stocking shelves in a drug store. At least he gets to go out on his terms.

After more than two years of not having full status, the 49-year-old Austin appeared out of nowhere in Mississippi last summer and won the Sanderson Farms Championship. That got him back to Kapalua, which meant the world to him.

“Especially when you’re about to turn 50 and have status,” he said.

Austin turns 50 in three weeks, though he has no plans to play on the Champions Tour except for any major he gets in. Kapalua was just a start. Austin is most looking forward to the courses he was kept from playing when he lost his card – Bay Hill, Hilton Head, Colonial, Memorial.

“I don’t plan on being one of those half guys,” he said of splitting time on two tours. “If I don’t get in the FedEx Cup (playoffs) and have six weeks off, then I’ll go play some on the Champions Tour. But I want to play out here.”

Austin lost his card in 2010 when he missed four cuts in his last seven events and finished at No. 129 on the money list. He got into only 18 tournaments the following year on conditional status, and only seven events in 2012 as a past champion.

His hallmark was ball-striking, and when that began to desert him, he was never very good with the putter (except for bashing it against his head, one of his more infamous moments) to atone for that. So what happened in Mississippi?

“That was the old me,” he said. “I knocked the flag over. That’s me. That’s what I do. This game now is only a putting contest. That’s all it is. Technology has brought everyone into a small bowl.”

Austin said he was most disappointed that in his two years needing some help, he received only one sponsor exemption. The Greenbrier Classic found room for him – he missed the cut two weeks before winning – and Austin said he will never miss the tournament again.

WORLD 100: Golf Digest has expanded its “Top 100” list to include courses worldwide, only that didn’t change anything at the top.

Pine Valley claimed the No. 1 ranking in the inaugural “World 100 Greatest Courses” list that appears in the February issues available in print next week. The magazine had the top three courses in America (Pine Valley, Cypress Point, Augusta National), with Royal County Down in Northern Ireland at No. 4.

Shinnecock Hills was at No. 5.

The ranking was determined by 846 people from the magazine’s U.S. Course Ranking panel, from panelists that work with Golf Digest’s 27 international editions and other selected golfers. Forty courses from the top 100 were in America. Golf Digest said America has 46 per cent of all the world’s golf courses.

Rounding out the top 10 were Royal Dornoch in Scotland, St. Andrews, Muirfield, Royal Melbourne and Oakmont.

AN ISLAND ON AN ISLAND: Hawaii residents can get sensitive when they hear tourists mention the mainland as “back in the U.S.”

Callaway Golf is the latest culprit.

In a press release announcing that it signed two-time PGA Tour winner Harris English to its tour staff, Callaway included a comment from English that was said “shortly before leaving the U.S. for Hawaii.”

DIVOTS: One fan of the Dallas Cowboys had reasons beyond football to feel badly for quarterback Tony Romo’s back surgery on Dec. 27. Jordan Spieth has to find a new partner for the AT&T Pebble Beach national Pro-Am. One possibility is country singer Jake Owen, who played last year with former U.S. Amateur champion Kelly Kraft. … Former PGA champion Rich Beem is the latest to have a weekly show on SiriusXM. Beem made his debut Monday and will host the show from 1 p.m. to 3 p.m. each Monday … Chesson Hadley has signed with International Sports Management, making him the first American client with PGA Tour status to sign with Chubby Chandler’s group.

FINAL WORD: “We’re all there. We all feel the same pressure. We all want to win that first major.” – Brandt Snedeker on first-timers winning 15 of the last 20 majors.