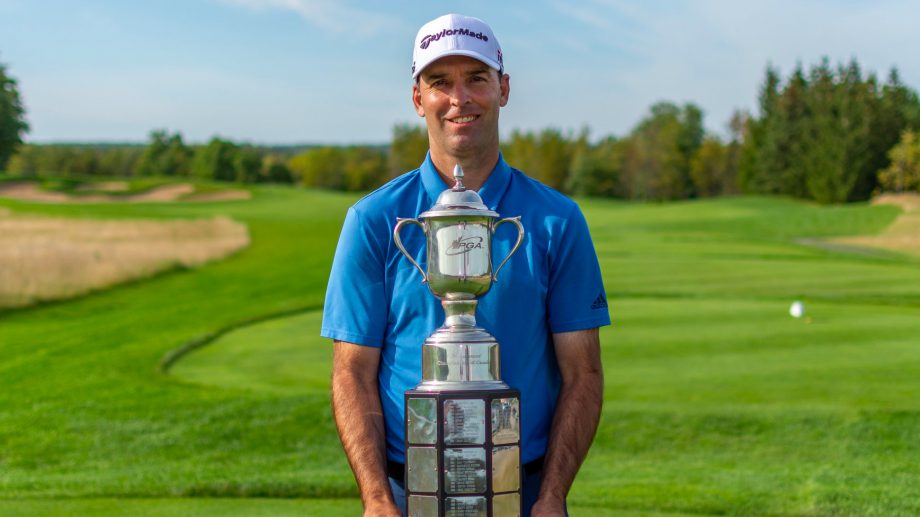 Wes Heffernan elevated his game to the next level Thursday at TPC Toronto at Osprey Valley, capturing the PGA Assistants’ Championship of Canada presented by Callaway Golf in impressive fashion.

The 42-year-old from the Dynamic Motion Golf Performance Centre in Calgary capped off his first PGA of Canada national championship with a final-round 8-under-par 64, bringing his three-day total to -19.

Heffernan’s championship run featured 19 birdies and more incredibly, not a single bogey for the week.

“Today I played pretty much like I had all week,” Heffernan said. “I drove the ball really well, but hit my irons great—especially on the back nine when I needed it most.”

Heffernan’s five birdies on the final nine saw him put some space between himself his two playing competitors, Yohann Benson of Quebec and B.C.’s Oliver Tubb. All three were jostling for the lead throughout the front nine of the North Course at TPC Toronto at Osprey Valley, but the back is when Heffernan took his play up a couple of notches.

“I made a great birdie on No. 13 and that was big because both Oliver and Yohann made par and that opened up a little gap between us,” Heffernan admitted after the round. “But I think the biggest birdie of the day for me was at No. 15 when they both it in there really tight and I was forced to make a good putt to keep my momentum going.”

In addition to birdies on Nos. 13 and 15, Heffernan birdied the 12th, 16th and 17th en route to his three-shot victory over Benson. Tubb finished alone in third at -15, while Bryn Parry wound up at -14 in solo fourth. Pierre-Alexandre Bedard rounded out the top-five at -11.

“It’s pretty cool to finally have won this championship,” Heffernan said. “The last couple years I’ve maybe tried too hard and as a result have spun my tires a little bit, but this week I just came in with the mindset to have some fun,” he said, adding, “and it feels really awesome.”

With the win at TPC Toronto at Osprey Valley, Heffernan is expected to move into the top three of the PGA of Canada Player Rankings presented by RBC when they’re released next week.

Originally launched in 2011, the PGA of Canada Player Rankings presented by RBC has received much praise over the past eight years. Players ranked inside the top 64 earn invites to the PGA Championship of Canada. The Mike Weir Player of the Year Award is also based on points earned throughout the calendar year. Players gain these points based on performance at national and zone tournaments.

Designed by famed Canadian golf course architect Doug Carrick, the venue features a parkland-style layout that welcomes players with generous landing areas and naturally rolling fairways. While its width off the tee may be benevolent, deep greenside bunkers and undulating putting surfaces put a premium on approaching pins from the right angles, providing a challenge that rewards good shots but tests those who get out of position.

The next PGA of Canada national championship takes place Oct. 6-9 at Cabot Links for the RBC PGA Scramble of Canada presented by The Lincoln Motor Company.