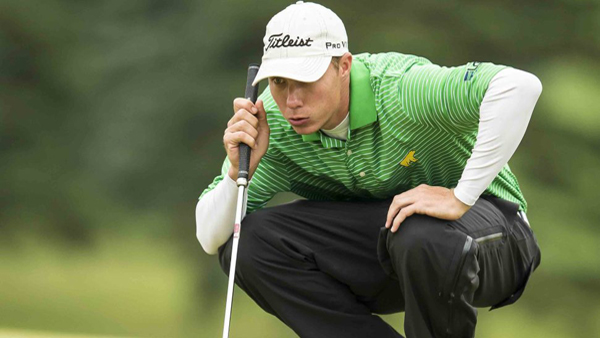 Thunder Bay, ONd – Cincinnati, Ohio’s Wes Homan carded a 4-under 68 on Saturday at Whitewater Golf Club to take a two shot lead heading into the final round of the inaugural Staal Foundation Open presented by Tbaytel.

The 30-year old bested playing partner Greg Eason of England, who began the day tied with Homan, by two shots in round three to reach 16-under through 54 holes, five clear of Apopka, Florida’s Jeffrey Corr in third and seven clear of two players in fourth. Homan will take a solo lead for the first time after any round in his four seasons on PGA TOUR Canada.

“I’m excited. You can’t ask for a better position. That’s why I was here today, and we’ll go see what we can do tomorrow,” said Homan, a Southern Methodist University grad.

Homan’s round was highlighted by an eagle at the par-5 7th, when his approach from the fairway struck the flagstick and set up a short eagle putt. He would go on to convert and jump two shots in front of Eason, where he finished the day.

“I had 255 to the flag. It looked really good in the air and I saw it dink off the flag. Maybe it’ll go in tomorrow,” said Homan of his approach on the 7th. “I hit some really great shots. I made some good birdies and had one bad club choice and bad a bogey, but I feel like I can bounce back pretty well from that. It was nice.”

Homan’s best finish on PGA TOUR Canada is solo second at the 2011 Bayview Place Island Savings Open presented by Times Colonist, when he shot a final round 65 to finish two shots behind eventual winner Jose de Jesus Rodriguez of Mexico. Homan, who currently sits 22nd on the Order of Merit, said he looked forward to the challenge of trying to convert the lead into his first PGA TOUR Canada win.

“It’s just me versus the course,” said Homan. “We’ll see what I can do. Somebody could play great and steal it from me, but as long as I try as hard as I can on every shot that’s all I can do.”

Eason, a 22-year old rookie, said he liked how he managed the pressure of playing in the day’s final pairing and was excited to be in his position despite falling two behind.

“Second place, I’d have taken that before the week started. If I can play some nice golf and hole a few putts, then who knows,” said the University of Central Florida grad, who birdied the 17th to pull within two of Homan. Eason added that he didn’t plan on worrying about what Homan would do on Sunday, and instead would try to focus on his own performance.

Victoria, British Columbia’s Cory Renfrew was low Canadian through three rounds in sixth spot at 8-under following a 5-under 67.

RENFREW LOOKING TO SPRINGBOARD FROM WEB.COM TOUR EXPERIENCE
After a pair of starts on the Web.com Tour over the last two weeks, Cory Renfrew returned to PGA TOUR Canada this week with renewed focus and motivation, having gotten a taste of the next level and knowing he can get back there soon with a solid finish to his summer.

“Knowing I can compete out there gives me confidence, and knowing I can win out here and compete at the top level is big too. That’s my goal for the rest of the season,” said Renfrew, who played the Nova Scotia Open on a sponsor’s exemption and finished in the top 25 to gain entry into the following week’s Utah Championship presented by Zions Bank.

The University of British Columbia grad carded a 5-under 67 on Saturday to move up 19 spots to solo sixth in Thunder Bay, and said his experience at the next level has motivated him to try and finish in The Five and earn Web.com Tour status for next year.

“I was ecstatic to make it for two weeks on the Web.com Tour,” said Renfrew. “I played well in Nova Scotia and had fun. It’s a different kind of ballgame out there and I’m hopefully going to use this as practice for out there for years to come.”

Renfrew, who won the Syncrude Boreal Open presented by AECON in 2012 and finished 15th on the Order of Merit last year, has made two of three cuts this season and finished a season-best T-34 in Fort McMurray.