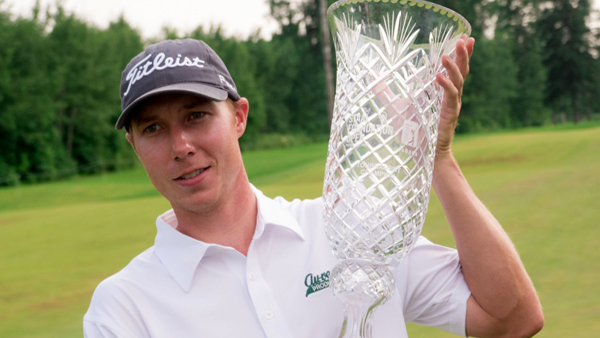 The 30-year old prevailed in a dramatic fight to the finish over rookie Greg Eason of England, who made a clutch birdie of his own at the last to force Homan’s hand. Homan calmly stepped up a drained a 6-footer, punctuated with a pump of the fist, to secure his first win in four seasons on TOUR.

“It felt great to make that putt,” said Homan, who finished at 17-under for the week. “It’s more of a sense of relief about all the hard work I know I’ve been putting in and sometimes people don’t know about. It was amazing. I did hurt my back on one of those fist pumps, so it was pretty exciting and fun.”

The win moves Homan into the fifth spot on the Order of Merit halfway through the 2014 season, in position to earn Web.com Tour status in the season-long chase for The Five.

“It’s huge. Every shot counts,” Homan said, acknowledging he has a long way to go the remainder of the season. “This isn’t gonna change my life, but it’s going to be a step towards where I want to go and I’m glad I was able to accomplish it.”

The Southern Methodist University grad began the day with a two stroke advantage over Eason, a promising rookie in his first season as a pro. Homan would lead by as many as four shots during the front nine, but came to the 72nd hole with a one stroke lead. Eason, needing at least a birdie, struck a brilliant wedge shot to within two feet, setting the stage for Homan, who needed to get up-and-down from some 60 feet away. Homan responded beautifully with a chip that caught a piece of the hole and ran out to six feet, then poured in the putt to seal the victory.

“I tried to convince myself I didn’t care, so I just kind of freed myself up. I’ve been hitting good chips all week and even over on the practice green, and I’ve been working on that since last week,” said Homan. “That last putt was great. I said ‘just because I’m nervous doesn’t mean I can’t hit a good one,’ and I hit a great putt.”

The win was particularly special for Homan and his father Chip, who was on hand to watch his son play for the first time in nearly two years.

“He doesn’t get to come out a whole lot and he’s my biggest supporter and has been since day one,” said Homan. “It’s nice to be able to do that with him here.”

Homan’s previous best finish was a solo second at the 2011 Bayview Place Island Savings Open presented by Times Colonist, with the win coming in his 26th career start. The $27,000 winner’s check put him at $35,692 in season-long earnings.

“I knew it was in me. I’ve been working hard, and it was nice to let it all accumulate to this big win today,” Homan said of finally breaking through for his first win.

Eason’s solo second result moved him to seventh on the Order of Merit, while Apopka, Florida’s Jeff Corr finished in solo third after a final round 69 to finish at 14-under.

Though he didn’t know where he stood exactly, Fargo, North Dakota’s Josh Persons knew a birdie at the 72nd hole Sunday would go a long way in helping him move up to No. 3 on the Order of Merit and secure a spot in next week’s RBC Canadian Open.

As it turns out, the birdie Persons posted made all the difference, allowing him to finish in a four-way tie for 11th and make just enough to sneak by incumbent No. 3 Matt Harmon, who missed the cut. One shot higher, and he would have missed out by $155.

“It’s a big relief,” said Persons, who won the Bayview Place Island Savings Open presented by Times Colonist earlier this year for his first PGA TOUR Canada win. “I really had to grind it out today, and to know I’ve got a spot on the PGA TOUR next week is a great feeling.”

Order of Merit leader Joel Dahmen, who finished in a tie for fifth to extend his lead at the top, and No. 2 Tim Madigan had already secured spots in the top three for next week and will both make their PGA TOUR debuts.

With a final round 2-under 70, Peterborough, Ontario’s Ted Brown finished in a tie for seventh to earn Freedom 55 Financial Canadian Player of the Week honours. Brown finished at 9-under and won a tiebreaker over Victoria, British Columbia’s Cory Renfrew.