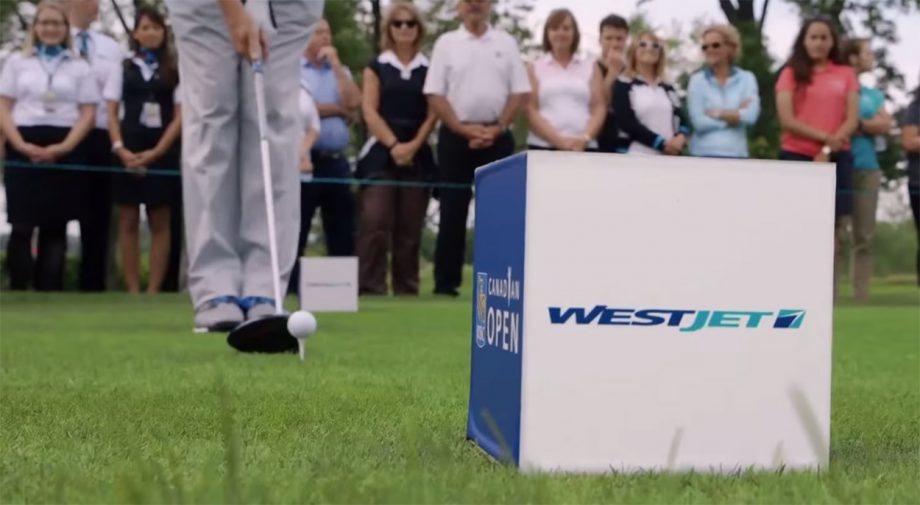 WestJet today announced a three-year partnership as the official airline of the RBC Canadian Open and the Canadian Pacific Women’s Open with a new Facebook contest and a golf-themed fundraiser for Ronald McDonald House Charities (RMHC).

“As an airline that earned its stripes on the leisure side of the business, and golf being a top Canadian leisure pursuit, sponsoring the RBC Canadian Open and the Canadian Pacific Women’s Open is a natural fit,” said Richard Bartrem, WestJet Vice-President, Communications and Community Relations. “Getting involved with both tournaments offers a great opportunity to celebrate Canadian’s love of the game, especially since many of our guests fly WestJet to popular golf destinations across our network.”

“WestJet has shown a tremendous innovation in how they engage with Canadians and we are honoured to align their respected brand with Canada’s National Men’s and Women’s Open Golf Championships,” said Golf Canada Chief Commercial Officer Gavin Roth. “The RBC Canadian Open and Canadian Pacific Women’s Open are pinnacle events in Canadian golf and WestJet’s partnership will further strengthen both championships’ ability to connect with Canadian golf enthusiasts in communities from coast to coast.”

WestJet will also team up with RBC and RMHC, a WestJet Cares for Kids national partner, for a special fundraiser during the RBC Canadian Open.

“We see an opportunity to highlight the tremendous work Ronald McDonald House Children’s Charities does on behalf of families across Canada every day,” continued Richard Bartrem. “Partnering with RBC and RMHC during one of the premier sporting events in Canada will help us raise funds and raise the profile of a valuable organization.”

In order to ensure everyone across the country can share the excitement surrounding the RBC Canadian Open, WestJet wants you to share #YourOpenMoment. Visit the WestJet Facebook page to view a special video celebrating a love of the game. Share the video and one lucky winner will receive round-trip WestJet flights for two from anywhere in Canada, along with accommodation and tickets, to the RBC Canadian Open. WestJet’s Facebook post can be found here.