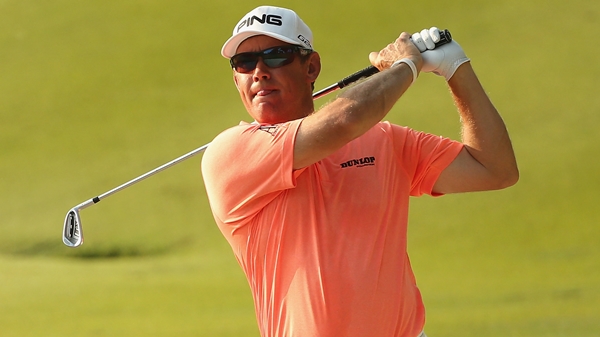 Westwood had a bogey at his first hole but birdied four of his closing five to take a one-shot lead ahead of Nicolas Colsaerts of Belgium before play was suspended because of the risk of lightning.

A tropical downpour in the afternoon had previously halted play for more than an hour, and 45 players in the 156-man field will have to complete their first round on Friday.

The 36th-ranked Westwood is coming off a seventh-place finish at the Masters last weekend – his best so far this year – and is looking to repeat his Malaysian Open victory from 1997.

“I didn’t make the best of starts bogeying … the first hole, but fortunately that didn’t set the tone,” Westwood said. “I hit it really well and hit it close a lot. I had to be patient because I was hitting good putts and they weren’t going in (until) I holed one from about eight feet on my 16th.”

Colsaerts recovered from a neck injury that forced him out of the Houston Open earlier this month and carded a 66. Northern Ireland’s Michael Hoey and Portugal’s Ricardo Santos were a stroke further back in the co-sanctioned European and Asian Tour event.

Colsaerts, a former Ryder Cup player who has slipped to 131st in the world, had eight birdies and two bogeys in his round.

“I’ve felt I’ve played pretty well since early in the season, but there’s always been a stretch of holes where I’ve shot myself in the foot for some reason,” Colsaerts said. “I’ve missed good opportunities to have good weeks. So the plan is to come back here to get some momentum and confidence back.”

Defending champion Kiradech Aphibarnrat of Thailand shot a 71 and 2012 winner Louis Oosthuizen of South Africa had a 72.