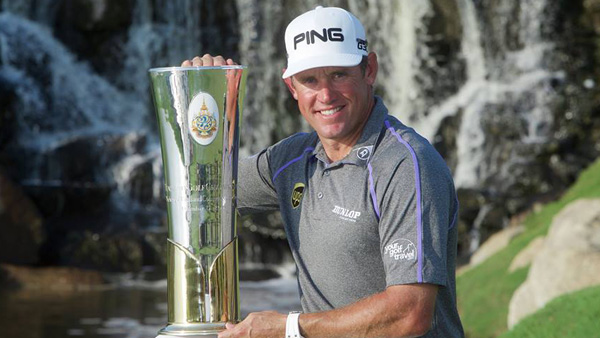 The 2011 champion was in a three-way lead with Fraser and Kaymer at 8 under with two holes to go but the German bogeyed the 17th while the Australian missed an easy par putt on the 18th, giving Westwood, who was watching in the clubhouse, the victory.

Westwood came back from two straight bogeys at the start of his final round to fire seven birdies for a 67 and an 8-under 280 total.

“I didn’t start well and I knew I needed to shoot good scores,” Westwood said. “I played some really good shots and made a couple of safe putts, hit a lot of fairways.

“This win is more special than in 2011 as then I was having a big lead,” added Westwood, who has won eight Asian Tour titles.

Overnight leader Fraser, who started the day with a two-stroke cushion, carded five birdies against two bogeys for a 281 to finish joint-second along with U.S. Open champion Kaymer.

The result assures Fraser of an entry into the British Open as one of the four leading players at the Thailand Golf Championship who had not already qualified.

“That’s why I came up here to try and do – get one of those spots at the (British) Open at St Andrews next year so it’s great, I’m excited. I played there in 2005, the first major I ever played, and was jumping out of my skin on the first tee. But hopefully I will be a bit calmer next year,” said Fraser, who has not won an Asian Tour title since victory in Korea four years ago.

Apart from Fraser, Australian Scott Hend, who finished fifth with a 284, American Jonathan Moore and India’s Anirban Lahiri, both in joint-sixth with 285s, took the remaining three berths.

Canada’s Richard Lee finished the week in a tie for 38th at 6 over par after carding a final round 74.

Despite finishing at 6 over 294, American David Lipsky finished the year as the top player on the Asian Tour with total prize money of $713,901.