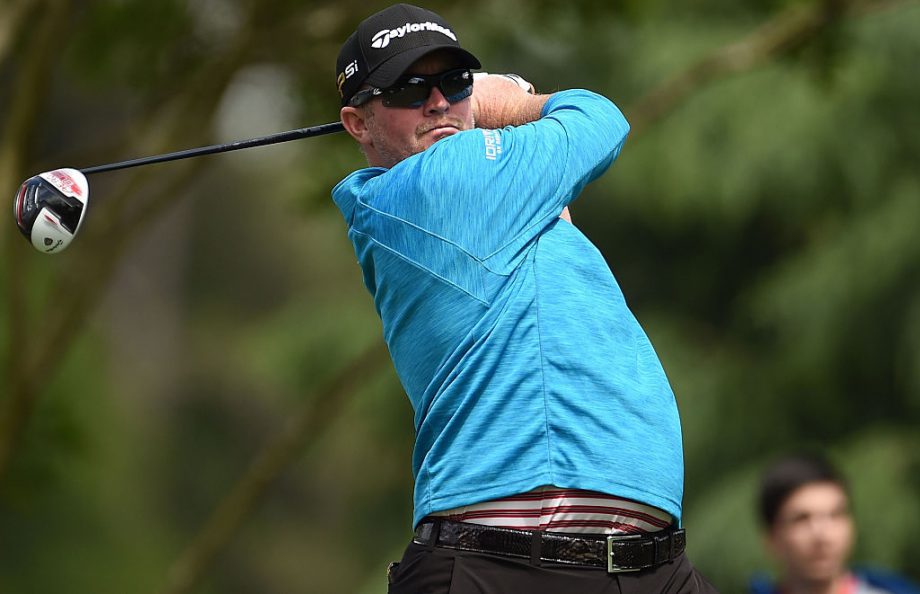 CHARLOTTE, N.C. – Steve Wheatcroft and Andrew Loupe each shot 7-under 65 on Thursday in rain and steady wind to share the first-round lead in the Wells Fargo Championship, while Rory McIlroy and Rickie Fowler dodged a thrown golf ball with an earplug attached to it.

As if battling a lengthy and saturated course wasn’t enough, playing partners McIlroy and Fowler endured a bizarre event on the sixth tee box when a spectator hurled the dressed-up golf ball their way as Fowler was preparing to hit.

“So random,” Fowler said. “The guy tried to say it was a gift. I don’t know why you would give a gift of a golf ball with an earplug attached to it.”

The fan was escorted from the property by police.

“It was one of those things,” McIlroy said. “It was a golf ball with an ear plug stuck on it, so it was sort of strange.”

Fowler, the 2012 winner, finished with a 71, leaving him six shots behind Wheatcroft and Loupe, who were also paired together. McIlroy, the only two-time winner of the tournament, shot a 73 after a bogey-plagued start to his title defence. He won by seven shots last year, finishing at 21 under.

India’s Anibarn Lahiri was a shot back after a 66.

Phil Mickelson, who has finished in the top five six times in 12 starts at the Wells Fargo Championship but never won, opened with a 69.

“I have been able to play well here over the years, but just haven’t been able to breakthrough and get a victory,” Mickelson said. “But I will keep knocking on the door and hopefully keep giving myself a chance.”

But the talk of the tournament came after McIlroy hit his tee shot on the green on the 250-yard, par-3 sixth hole. When Fowler stepped up to the tee he saw something fly by his left side, startling him for a moment.

He didn’t know what it was until it stopped rolling.

The 27-year-old Loupe, who has three top-10 finishes this season, shot 31 on the front nine. Wheatcroft did his work on the four par 5s, playing them in 6 under with two eagles and two birdies.

“Kind of felt like I was trying to keep up the whole time with Steve,” Loupe said. “We both had it rolling early. Just solid golf for the most part, just looking to keep that momentum going.”

McIlroy has some work to do to get into contention if he hopes to become the first three-time winner.

He called his first competitive round since the Masters a “tale of two nines.”

The world’s No. 3-ranked player shot a 4-over 40 while starting on the back side, then got things headed in the right direction with four birdies on the front.

“I was sort of still in range mode on the front nine,” McIlroy said. “I didn’t really have my scoring head on.”

McIlroy, who turned 27 on Wednesday, wasn’t pleased with how he played in the soggy conditions but said the strong finish gave him something strong to build on for Friday.

“I need to go out and shoot a good round, something in the 60s, and get myself back into the tournament going into the weekend,” said McIlroy, who has spent the last three weeks working to fix his swing.

Jim Furyk shot a 73 in his return from an eight-month layoff because of a wrist injury.

Furyk had “no pain, no apprehension,” but said he wasn’t planning to hit many practice balls after the round – which didn’t exactly upset him.

“I don’t enjoy hitting balls, so actually it’s kind of fun,” Furyk said. “I’m not really allowed to or can’t, so I’m enjoying that part of it.”

Top-ranked Jason Day and No. 2 Jordan Spieth did not enter the event, and No. 8 Dustin Johnson withdrew earlier in the week because of unspecified reasons.