Who moved the ball? 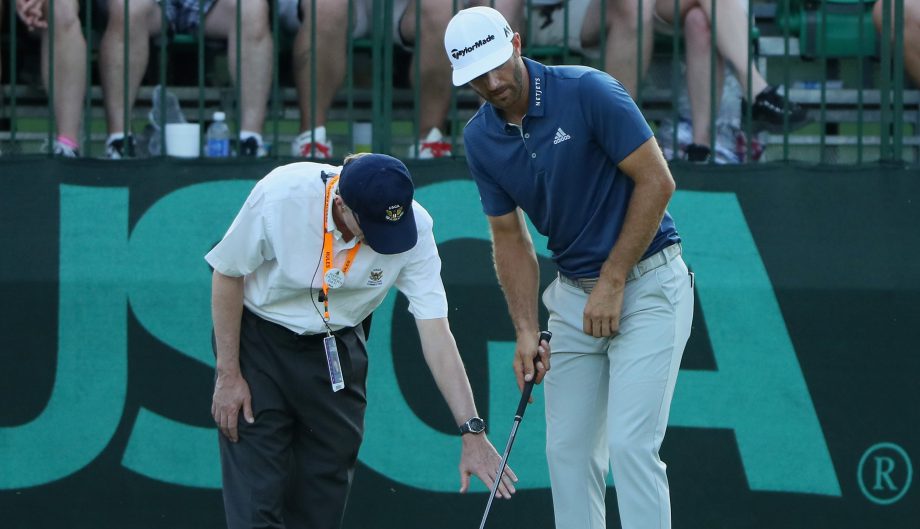 The Rules of Golf state that if a player causes his or her ball in play to move there is a one-stroke penalty and the ball must be replaced. It’s a rule that dates back decades and is one with a few exceptions. However, over the last few years, it has also become increasingly difficult to enforce with both players and officials struggling to definitively determine what caused a ball’s movement.

Accidental Movement of a Ball on a Putting Green

When a player’s ball lies on the putting green, there is no penalty if the ball or ball-marker is accidentally moved by the player, his partner, his opponent, or any of their caddies or equipment.

This Local Rule applies only when the player’s ball or ball-marker lies on the putting green and any movement is accidental.

Note: If it is determined that a player’s ball on the putting green was moved as a result of wind, water or some other natural cause such as the effects of gravity, the ball must be played as it lies from its new location. A ball-marker moved in such circumstances is replaced.”

Implementing this Local Rule will absolve a player of penalty if a ball in play on the putting green is accidentally moved. It should also be noted that this Local Rule would modify Rule 18-3 and Rule 20-1, providing no penalty in match play to an opponent accidentally causing a player’s ball or ball-marker to move, as well as no penalty for an accidental movement of a player’s ball-marker on the putting green.

The desire to act immediately by introducing a Local Rule instead of waiting for the next code of the Rules of Golf in 2020 was mainly due to the alarming number of situations that arose where players’ balls were moving on the putting green. Most notably, this occurred during the final round of the 2016 U.S. Open.

Lining up a par putt on the fifth hole at Oakmont last year, Dustin Johnson’s ball slightly shifted on the green causing him to back away. After studying video and talking to Dustin after his round, the USGA ruled Johnson’s actions caused the ball to move and served him a one-stroke penalty despite his denial. Ultimately, it didn’t affect the outcome of the event as the American won his first major by three shots.

In today’s game though, the speed, slope and shape of putting greens is exponentially increasing the likelihood of balls moving. Globally, all the major golf tours worldwide will implement this new Local Rule, including the PGA Tour, European Tour, LPGA Tour and the PGA of America.

In Canada, all the provincial golf associations will be implementing this Local Rule as part of their Standard Local Rules, as well as Golf Canada, whose Rules and Amateur Status Committee formally ratified it at our annual general meeting.

This new Local Rule has been widely praised and is in fact one small piece of a greater effort to make the Rules of Golf easier to read, understand and apply. Golf’s governing bodies have been reviewing the rules for some time now and are considering a fundamental change to the Rules of Golf. The first iteration of the new Rules of Golf, through golf’s Rules Modernization Project, was announced to the public on March 1st.