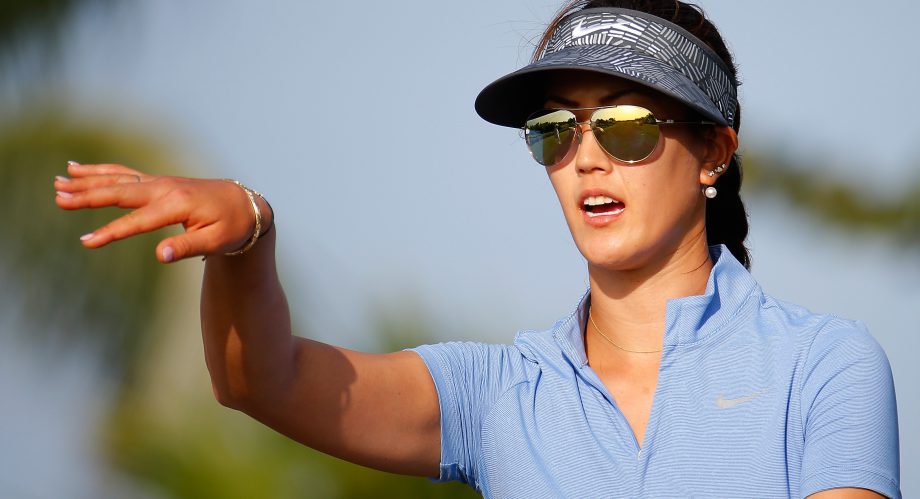 PARADISE ISLAND, Bahamas – Michelle Wie was stung by a bee Thursday in the season-opening Pure Silk-Bahamas LPGA Classic, and second-ranked Inbee Park withdrew because of back pain after the second-worst round of her LPGA Tour career.

Wie was stung on the palm of her right hand on the 16th hole, her seventh of the day at the windy Ocean Club. She finished with a 3-over 76 to fall eight strokes behind first-round leaders Paula Creamer, Charley Hull, Alison Lee, Ashlan Ramsey, Catriona Matthew, Mika Miyazato and Haru Nomura.

“I was waiting to hit my tee shot and I felt something sting and it hurt really, really bad and I knew it was a bee,” Wie said. “I brushed it away and the stinger was still in there. We were trying to find a tweezer and out of all the people, our security guy had tweezers on him, so I got it out.”

She bogeyed three of the first five holes on her back nine.

“It just kind of felt so swollen it was kind of hard to grip the club. I was hitting the ball so well on the front nine and just definitely had a couple loose ones coming in making the turn. You can kind of feel the venom kind of spread. But the last couple holes, it’s feeling better.”

She struggled with her putting.

Park shot an 80, playing her final four holes in 5 over with a double bogey on the par-5 15th and three bogeys. She will sit out the Coates Golf Championship next week in Florida, and hopes to return late next month in the Honda LPGA Thailand.

“I’ve always had a little lower back problem and some weeks it just gets bit worse and today happened to be one of those days,” Park said. “Hopefully, in Thailand I’ll be in really good shape.”

Creamer played a late three-hole stretch in 4 under, making an eagle on the par-4 eighth.

“I’ll definitely take it,” Creamer said. “This golf course, it’s a great track. It really does play well. The wind makes it very difficult, but these greens, they’re challenging. The biggest thing is get it as close as you can from the fairways and see what you can do.”

Lee finished with a bogey on the par-4 ninth after playing the previous three holes in 4 under with an eagle on the par-5 seventh. She is still a student at UCLA.

“I’m taking four classes right now,” Lee said. “Each week, I think, I counted to about 13 hours of class, so it’s not too bad. I have friends in each class that can give me notes.”

“You would much rather get off to a good start than a bad start,” Matthew said. “I think this course is tough because there’s a lot of crosswinds, which makes it difficult.”

The Japanese player had an interesting answer when asked if she did anything exciting in the offseason.

“Too much drink,” Miyazato said.

Her drink of choice?

“Whiskey,” Miyazato said. “Only in the offseason.”

Hull had a bogey-free round.

“It’s quite quiet this week,” Hull said. “You can really focus and get your head down and just get back out on tour.”

Jennifer Johnson and Min Seo Kwak were a stroke back at 69.

Canada’s Brooke Henderson carded a 2-under 71 in her opening-round of 2016. The 18-year-old Smiths Falls, Ont., native had three birdies and a single bogey on the day.

“It was a good round today,” said Henderson. “I missed a lot of opportunities which I wish I would have capitalized on, but at the same time I missed a couple greens and was able to get up and down. It was just kind of up and down. And I would have like to have finished a little further under par. But it’s a good start and get another good round in tomorrow and see what happens.”