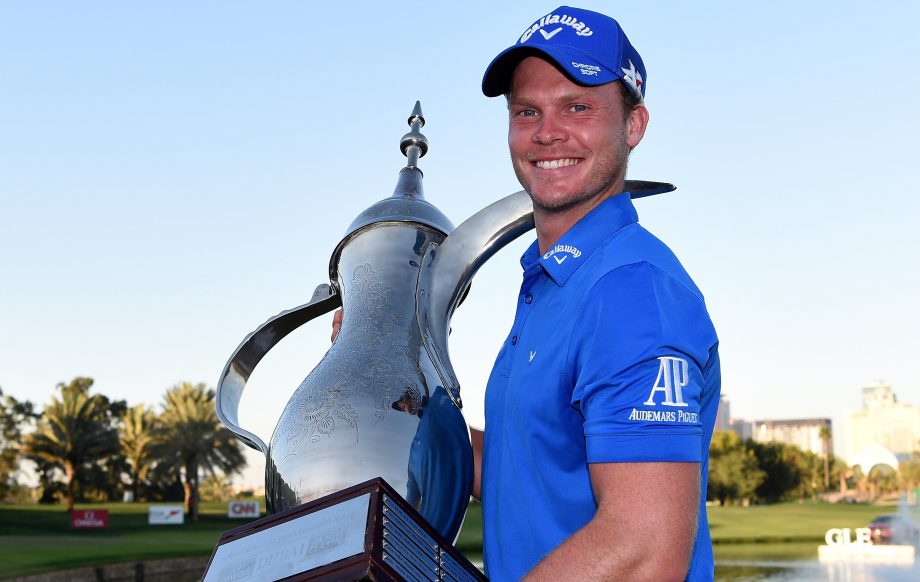 DUBAI, United Arab Emirates – Danny Willett withstood the pressure and made a 15-foot birdie putt on the final hole to win the Dubai Desert Classic title by one shot on Sunday.

The 28-year-old Willett closed with 3-under par 69 at Emirates Golf Club to finish on a 19 under 269, one shot better than fellow Englishman Andy Sullivan (68) and Spain’s Rafael Cabrera-Bello (69).

Both Sullivan and Cabrera-Bello had set the marker with birdies on the final hole to take the clubhouse lead. Willett was one-over par for his last four holes after a bogey on the 14th.

But he made the birdie when it mattered most. He had to lay up from the rough on the 18th hole, and his third shot left him with a difficult downhill putt, which he read to perfection.

It was the fourth European Tour victory for Willett, who finished second in the Race to Dubai to Rory McIlroy last year.

“I am just ecstatic,” said Willett, who made six birdies during the final round to go along with bogeys on the 2nd, 9th and 14th holes. “You can’t buy that feeling, you know, what it’s like coming down the back nine, the back three, in contention of a golf tournament. It’s something that you can’t pay for in life. You’ve got to earn it.

“Obviously, coming down the last with all the situations that were going on – Sully (Sullivan) just birdied, Rafa (Cabrera-Bello) hit it two-on . it was just nice to know that I can dig deep there and produce what I can.”

For Sullivan, it was the second straight runner-up finish in Dubai, having finished behind McIlroy at the DP World Tour Championship in November. But the 28-year-old Englishman was feeling more sorry for the small group of supporters from his home town of Nuneaton, who were following him around.

“Every time they have been there, I think I’ve done well. It’s been awesome,” said Sullivan, who had his “Team Sulli” in attendance during November’s tournament as well.

“I feel a little bit gutted for the two times they come to Dubai and I have been a bridesmaid both times, but I’m sure they are proud,” he said. “Fair play to Dan, holing that putt, that was a tough putt.”

McIlroy was happy with his closing 65, but disappointed he could not do any better than 15 under.

“It’s sort of a week of what could have been. There was a lot of really good golf in there. I played a lot of great shots and made a lot of birdies, but just made a few too many mistakes, as well,” said the Northern Irishman.

“I’ll rue the two front nines that I played on Friday and Saturday. Played the combined front nine 5-over par there and if I had not of done that, things could have been different.”