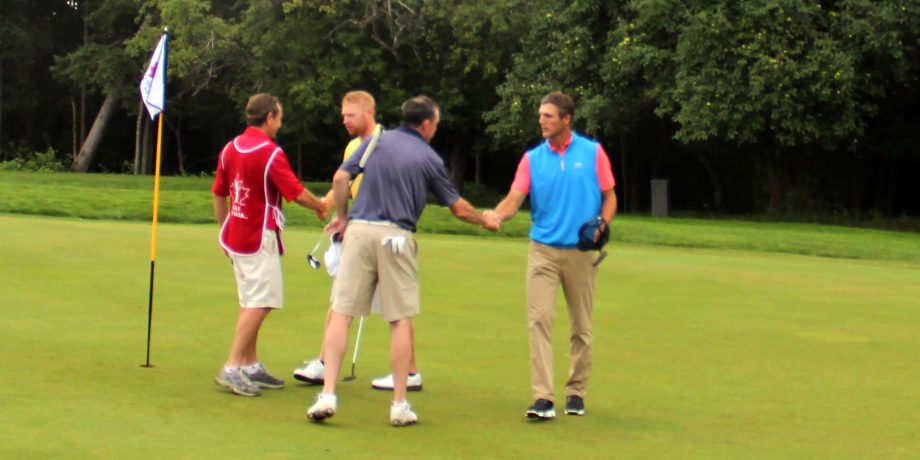 NEW GLASGOW, N.S. – Garrett Rank tamed cool temperatures and gusty 47 km/h winds to maintain his lead atop the leaderboard at the 2015 Canadian Men’s Mid-Amateur Championship. The defending champion carded an even-par round to mark his third straight day ahead of the field at Abercrombie Country Club in New Glasgow, N.S.

“The weather was tough today. It got really windy in the middle of the round,” said Rank. “But I played good and putted really well again. I made a few good six to 10-footers for par. I gave myself a few more chances today. It was just a solid round altogether.”

Rank registered another steady day, matching a bogey on hole 8 with a birdie on No. 15 to finish at even-par 70. The 27-year-old is four-strokes clear of his nearest competitor. Despite the advantage, Rank maintains a need to stay focused.

“I’m not really going to worry about what other guys are doing and just control what I can control,” added the native of Elmira, Ont. “I’ll just go out there and play against the golf course. I’ll stay patient again and give myself a lot of looks.”

At stake are the President’s Cup as Canadian Men’s Mid-Amateur champion and an exemption into the 2016 RBC Canadian Open. Next year’s edition of Canada’s National Open Championship will return to Glen Abbey Golf Club in Oakville, Ont.

In second place is another competitor familiar with emerging victorious at this competition. Dave Bunker is hoping to return to the winning form he found during three consecutive championships between 2008-10. Bunker tallied four birdies on the day en route to a round of 2-under 68.

“I hit the ball really well considering how windy it was,” said the 50-year-old. “I think anything around par or under-par is going to be a good score today. It was very difficult out there, I think.”

The native of Woodbridge, Ont., reflected positively on his competitors when asked about the possibility of adding a fourth championship. “Another title would be special. Now that the younger guys are playing – and they’re playing very well – if I can put a good round together tomorrow and challenge for first place, that’d be pretty good.”

Paul Raycroft of Humboldt, Sask., completes the top-3 following a round of 2-under 68 to move to 4-over 214 in the competition. The 34-year-old collected five birdies on the day and registered a bogey-free 1-under 33 across the back nine.

At a combined 2-over 212, Dave Bunker leads the over-40 Mid-Master division. A victory would give Bunker a fifth Mid-Master championship following four consecutive titles from 2007 to 2010. He sits seven-strokes clear of 2003 Canadian Men’s Mid-Amateur champion Garth Collings of Matlock, Man., and Middle Sackville, N.S., product Glenn Robinson.

Team Ontario captured the inter-provincial competition played concurrently with the first two rounds of the tournament. Garrett Rank and teammates Josh Hunke of New Hamburg, Ont., and Toronto’s Kevin Fawcett combined to shoot 5-over 285 to claim the R. Bruce Forbes Trophy by a three-stroke margin. Finishing in second was the team representing the host province while Team New Brunswick completed the competition at 12-over 292.

The final round will see players begin the day at 7:30 a.m. ADT with the leaders teeing off at 9:30 a.m. ADT. Additional information regarding the 2015 Canadian Men’s Mid-Amateur Championship can be found here.