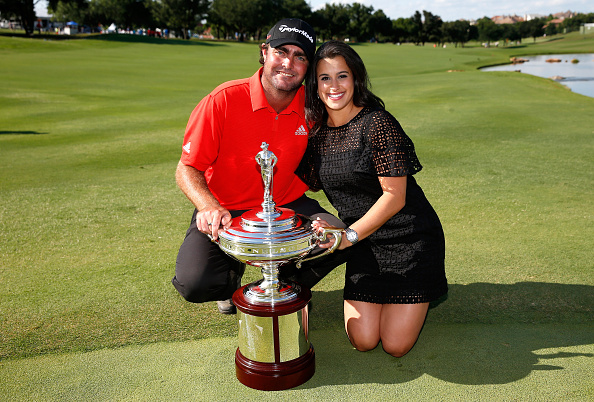 IRVING, Texas – Steven Bowditch already had wedding photos from the 18th green at the home of the AT&T Byron Nelson.

Now there are plenty of images of the Australian holding a big trophy after winning in his adopted home.

Bowditch rode his best birdie binge on the PGA Tour to a 5-under 64 and a four-shot victory Sunday in the Nelson, making him two-for-Texas in career titles after winning the Texas Open in San Antonio last year.

A Dallas-area resident for 10 years, Bowditch had 27 birdies while becoming the seventh player to lead all four rounds of the event. Playing next to the resort hotel where he got married four years ago, the 31-year-old Bowditch finished at 18-under 259 on the rain-altered TPC Four Seasons layout.

“You know, taking photos on the green today was probably – wasn’t probably, it’s definitely the second best time I’ve had on that green – since we got married,” Bowditch said in the interview room while wife Amanda watched from the back.

Hometown favorite and Masters champion Jordan Spieth stayed at 7 under after an even-par 69.

Playing with Bowditch in the final group, Dustin Johnson briefly overtook him early in the round before making an 8 at the par-4 sixth. He finished at 11 under with a 69.

Before the highs of getting married and winning at the home of the Nelson, Bowditch endured the low of a suicide attempt at his Dallas home while battling depression in 2006, not long after he moved to the U.S.

“My personal life is my personal life,” said Bowditch, who jumped 52 spots to No. 16 in FedEx Cup points and qualified for next year’s Masters. “It’s closed doors and, you know, it’s built me into the person I am today. Every win is special. This is just another one.”

A sunny day wrapped up two otherwise soggy weeks of golf in Dallas-Fort Worth starting with Colonial. A 5-inch overnight downpour after the first round of the Nelson turned one of its toughest holes – the par-4 14th – into a pitch-and-putt par 3 of barely 100 yards for the final three rounds.

While birdies were the norm after easy wedge shots from what might normally be a drop area in front of a greenside pond, Bowditch had to save par from about 12 feet to keep a three-shot lead, pumping his right fist after the ball dropped in.

The temporary tee box was about 20 yards farther back Sunday, and tour officials believe par of under 70 was a first according to records going back to 1983. The overall par total was 277.

Up by three at the spectator-friendly 17th, Bowditch leaned like he thought his tee shot on the par 3 might go in the water to the right of the green. Instead, the ball flew over the pin and landed safety on the back, and Bowditch raised his putter as the putt rolled in to punctuate the win.

“I was trying to hit it 30 feet left of the stick,” Bowditch said. “It was eyes closed and stomach to the floor a little bit.”

Spieth had an opening birdie but quickly gave it back at the par-3 2nd. He went in the water twice for bogeys on the back nine, including on 17 a day after he gave big galleries that followed him all week their biggest thrill by almost hitting the pin on the fly on the 198-yard hole.

After getting within three shots of the lead halfway through the tournament, Spieth never did threaten and ended his streak of second-place finishes in all three previous Texas events this year. The 21-year-old Dallas player tied for 30th five years after finishing 16th in his first tour event as a 16-year-old amateur.

“I really tried to soak it in today,” Spieth said. “I was getting frustrated this week just trying so hard, which is what I’ve done in past years as well. I don’t know if that’s going to stop in the future.”

Johnson birdied two of the first three holes even though he missed the first four greens, but the erratic start caught up with him at No. 6. Johnson went out of bounds to the right off the tee, then way left into tall grass off the rough with his second tee shot. It took him three swings to get out on his way to a quadruple bogey.

Walker, who won the Texas Open not far from home in March, also held the lead on the front nine but missed short putts for par on 11 and 12. He tried to make a late run with an eagle chip at the par-5 16th and a birdie on 17, but Bowditch answered with birdies on both holes.

“I had told myself going into 15, you know, birdie, eagle would be big,” Walker said. “But Steven played great today and hats off.”