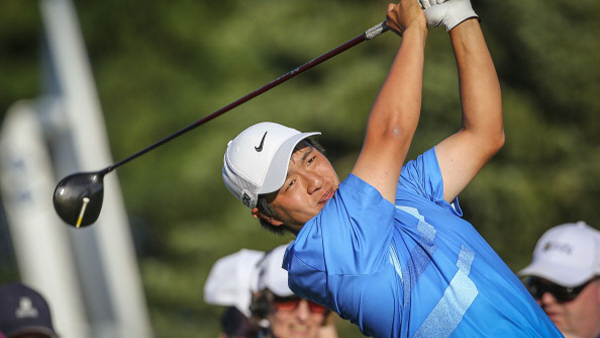 (Vancouver, BC) – North Vancouver’s Eugene Wong got his PGA TOUR Canada season started off on the right foot on Thursday, firing a bogey-free 6-under 66 at Point Grey Golf and Country Club to share the first round lead at the PC Financial Open with Clarkston, Washington’s Joel Dahmen and Mexico’s Mario Clemens.

Wong, playing in front of friends and family on a familiar golf course, carded six birdies and converted a tricky sand save on the 18th hole for par to preserve a flawless opening round, one that he said he had been anxiously awaiting after resting in the weeks leading up to the start of PGA TOUR Canada’s second season.

“It’s definitely a confidence booster,” said Wong, a two-time winner on PGA TOUR Canada, who grew up playing junior tournaments at Point Grey. “I knew I was ready even though I didn’t play many tournaments coming in. I planned on not playing too much since there’s a long season ahead of me.”

Dahmen, entering his fifth season on PGA TOUR Canada with momentum after claiming two Gateway Tour wins in the offseason, said he couldn’t wait to get his season started and search for his first win on TOUR.

“It feels great to get the season off to a good start,” said Dahmen, who made five birdies, an eagle and one bogey on Thursday. “You’re always apprehensive or a little anxious to get it going, and I had a great winter. I was anxious to get this started. I had a month off after my last tournament, so I wasn’t really sure how I was going to play.”

The 26-year old University of Washington alum had a handful of chances to win on PGA TOUR Canada in 2014, and said he hopes his experiences in the winter will help him if he has a chance to claim his first victory later this season.

“I struggled on Sunday last year. I had three chances to win and didn’t get it done, and so to play through the winter and to win a few times and learn how to win was huge,” said Dahmen.

While Wong and Dahmen come into the season looking to improve on past success, Mexico’s Mario Clemens looked like a veteran in his first PGA TOUR Canada start. The British Columbia Q-School grad, who won the 2013 Mexican Amateur Championship and finished T-4 at the NEC Series – PGA TOUR Latinoamérica’s Abierto de Chile, said he was thrilled to be in Canada as he looks to play his way onto the Web.com Tour in 2015.

“This is the fastest way to the PGA TOUR, I think. So far, Canada’s just been amazing. Vancouver is one of the most beautiful places I’ve ever been. The views here are just spectacular and the people are so nice, very welcoming.”

Clapp claims rainy weather as advantage on day one

Making his debut as a PGA TOUR Canada member, Chilliwack, British Columbia’s Brad Clapp made himself look like a veteran, firing a 5-under 67 to share fourth place with Sacramento, California’s John Catlin and Seattle, Washington’s Blake Snyder. The bulk of his round came in Monday’s morning rain, an element Clapp said actually may have helped Vancouver-based players like himself.

“I’ve said it to a few of the Vancouver guys, if it rains a little bit and it’s wet out here, it’s a huge advantage for us,” said Clapp. “The way the ball flies and how it reacts on the greens, and just staying dry. There are a lot of guys that play fair-weather golf all year round and we don’t have that advantage, so it was nice to get some rain and even nicer to play well in it.”

Clapp, who is making his debut on TOUR after a successful run on the PGA of BC club circuit, including a win at the 2012 PGA of BC Championship, said he was able to calm his nerves enough in front of friends and family at Point Grey.

If Moscow, Idaho’s Chris Williams’ resume looks familiar, it’s because it’s nearly identical to that of Nick Taylor, who played his way from PGA TOUR Canada onto the Web.com Tour last season. Both claimed former spot atop the World Amateur Golf Rankings and a Ben Hogan Award while playing at the University of Washington, where several players have come from on their way to PGA TOUR Canada.

“There’s a bunch of us out here, and obviously Nick went through here last year on the way to the Web.com Tour. It’s a nice play to play,” said Williams, who fired a 4-under 68 in round one to sit tied for seventh. Other former Huskies in the field include Dahmen, Brock Mackenzie, Joe Panzeri and Darren Wallace.

“Nowadays it’s tough to find a place to play, so it’s perfect to have a 12-tournament schedule and plan out your travel for the summer,” said Williams. “And obviously, at the end of the year there are those five spots on the Web.com Tour, so it’s really competitive. Click here for scores