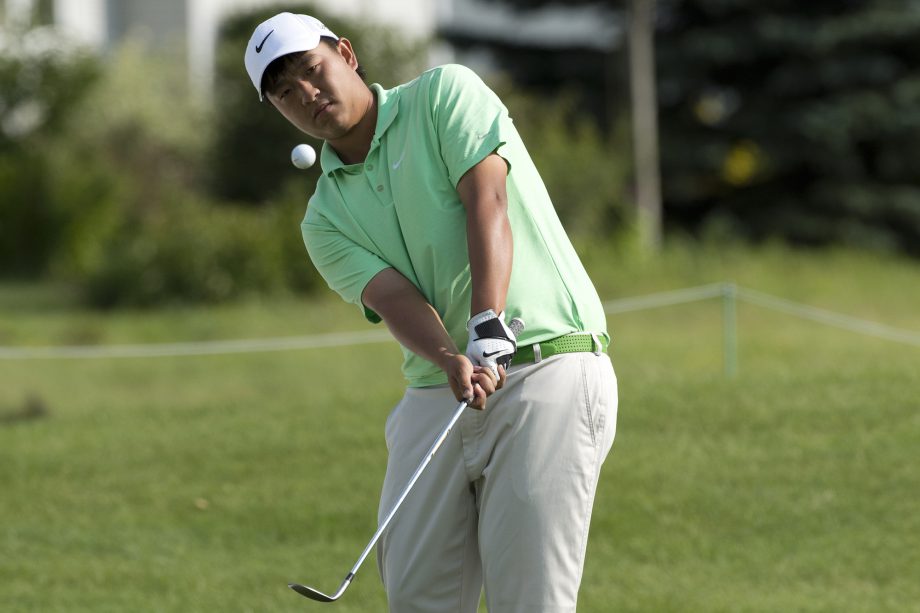 BEIJING – When the final round of the Ping An Bank Open began, a few players held out hope that they could catch 54-hole leader Eugene Wong. Two things would have to happen, though, if that were to occur. One of those players would have to go low, and Wong would have to fall back. The second part of the equation did not happen.

Despite three back-nine bogeys Sunday, Wong cruised to a five-shot win over former University of Oregon teammate Rak Cho and China’s Zihao Chen. The victory moved Wong to second on the Order of Merit through five tournaments, behind only Josh Geary.

When the day began, Wong, the 2010 Jack Nicklaus Award winner as the College Player of the Year, held the big advantage over China’s Zhang Huilin. Immediately, Wong’s lead grew to nine strokes when he birdied his first hole of the day. Wong added two more birdies, on Nos. 5 and 9, and made the turn with the nine-shot lead. Even with Cho shooting a 7-under 65 and making some noise, Wong was on cruise control.

“I’ve been playing really well on this Tour, with three top-10s and a solo second at Wuhan (United Investment Real Estate Wuhan Open),” Wong said. “So fortunately I was able to win one of these tournaments for myself. Shooting the 9-under, bogey-free round [Saturday] gave me enough cushion that I could just plot my way around today. Starting the front nine 3-under, I didn’t need to feel nervous out there, I could free up and make a few mistakes and not have to really worry about it.”

The victory is Wong’s third as a professional. In 2012, the Vancouver, British Columbia, resident won twice on the Mackenzie Tour – PGA TOUR Canada. He is also the second Canadian to win on this Tour, joining countryman Justin Shin. It was Shin who prevented Wong from winning in Wuhan.

Despite the big final-round lead, Wong did admit to feeling nerves as he stepped to the first tee with spectators lining both sides of the fairway. “But the first birdie on the first hole calmed me a little bit,” he noted.

Wong didn’t have to work very hard for his second birdie, knocking his approach shot on the par-4 fifth to less than a foot. He finished his front nine with a birdie on the par-5 ninth before three back-nine bogeys led to an even-par 72 and his final, five-shot advantage.

“This is my first time have an eight-shot lead going into the final round,” he said. “I was trying to keep things as calm as I could, and my caddie kept telling me, ‘You’re OK. You’re doing fine.’ This is a kind of new experience, and I feel very happy. Overall, a win is a win for me.”

Cho was philosophical, knowing Wong’s lead was nearly insurmountable. And if there were a player in the field who knows Wong’s game, it’s Cho. The two were teammates at the University of Oregon. Still, Cho was happy with his strong Sunday play and his career-best finish in the Series. Cho also improved to ninth on the Order of Merit.

“My putting was very good today. I hit the ball good enough to keep it going in,” said Cho, whose only bogey came on No. 6 when his tee shot went out of bounds. He kept his round going with a 15-foot bogey effort.

“No. 6 is the key to this round,” Cho noted. “It was a bogey that actually kept me going. If I had made triple (bogey), and I could have, it would have killed my momentum.”

Cho made five more birdies the rest of the way.

Yet the day clearly belonged to Wong, who admitted he had already signed up for all three stages of the Web.com Tour Qualifying Tournament. But with his standing in the Order of Merit, he is in good position to earn his 2016 Web.com Tour card.

“I think I’ll try to refund some of my money,” Wong joked.

The next tournament on the schedule is the Cadillac Championship, also in Beijing, Sept. 24-27 at Topwin Golf and Country Club.