Wong leads by one at PC Financial Open 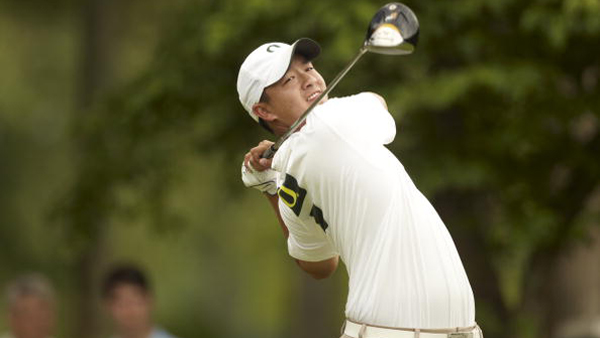 Wong’s opening rounds of 66-67 gave him a 1-stroke advantage over PGA TOUR Canada rookies John Catlin of Sacramento, Calif., and Kelvin Day of England at 11-under-par 133. Catlin birdied his final two holes for his second consecutive round of 67 while Day posted the low round of the day with a 66.

In a five-way tie for fourth three shots back are Chilliwack, British Columbia’s Brad Clapp and West Vancouver’s Seann Harlingten, along with Chris Parra of Texas, Joel Dahmen of Washington and Mario Clemens of Mexico. Dahmen and Clemens shared the first-round lead with Wong.

Wong grew up playing junior tournaments at Point Grey and through two rounds, his biggest problem has been securing enough tickets for friends and family. The two-time PGA TOUR Canada winner stuck to his game plan of playing aggressive on Friday.

“The par-5s are all reachable if you hit a good drive, so yes, the plan was to attack,” Wong said. “And the same on the par-4s, when I have wedge in, I attack as well. It will be the same (this weekend), I’ll stick to my game plan unless someone catches me then I might change something here or there.”

“That was a full 3-wood, a good 3-wood,” Wong said with a smile, “From there, I made some long putts, and missed some shorter ones, but it’s a game of give and take. I could have shot lower but I’ll take my 5-under today.”

Wong didn’t make his first bogey of the tournament until his 24th hole, No. 6 on Friday, and has just two miscues through the first 36 holes.

“I hit a bad drive on the sixth hole, but you know what, it’s not bad for what I’ve done so far,” Wong said. “I won’t think about that.”

Catlin, 23, an honorable mention All-American while at the University of New Mexico, said enjoying the game again has been a key to his success in his PGA TOUR Canada debut.

“This whole week, I’ve been just trying to have fun, trying to play like a kid again,” he said. “It’s easy when you start playing this game for a living, to get so into it, because we want to play well. But I’ve always played my best when I’m just out there having fun. I’m trying to see every shot before I hit it, feel what it takes to produce that shot, and then do it.”

When making comparisons to playing professionally and collegiately at the University of New Mexico, Catlin was quick to point out one obvious difference.

“The scores are a lot lower,” Catlin said. “That’s the first thing I noticed. You have to take advantage of the easy holes. You have to give yourself a lot of looks inside 15 feet. When I first turned professional, I wasn’t doing that. But I worked really hard on my wedge game and it’s much better than it used to be.”

Playing in the afternoon, Day recorded four birdies in his first eight holes en route to a 66 and a share of second. He came to Point Grey on a roll, having finished fifth at PGA TOUR Canada’s Florida Qualifying School in mid-April, followed up by a win on the Adams Pro Tour.

“I got my first win about three weeks ago, so I’m feeding off of that a little bit and just trying to let things happen as opposed to forcing things,” said Day. “It’s my fourth year as a pro now, so I’m trying to draw from past experiences.”

Making his maiden start on PGA TOUR Canada this week, Day is excited about the season-long pursuit of status on the Web.com Tour.

“I actually have a chance to play for something now,” he said. “I don’t know if that makes you play harder, but, but I definitely feel like I’m growing a bit out here.”

West Vancouver’s Seann Harlingten, 31, has taken the road less traveled, and that path has resulted this week in a top-10 performance heading into the weekend. After missing out on conditional status by one stroke at PGA TOUR Canada Qualifying School’s British Columbia site, Harlingten was granted a sponsor’s exemption this week. He has responded with rounds of 68-68 to trail leader Eugene Wong by three heading into the weekend.

Hartlingten, who at the age of 16 became the youngest player to make the cut at a Web.com Tour event when he finished T33 at the 2003 Mark Christopher Charity Classic, turned professional after graduating from high school. He was a member of PGA TOUR Canada in 2006 but suffered a Triangular Fibrocartilage Complex Tear in his right wrist and was limited in his starts over the next several years before stopping all together for a time.

“I basically quit golf for five years but now back at it,” said Harlingten. “I can’t hit balls, my wrist kills if I pound balls, so I grind away on my short game.”

That short game has paid off, as Harlingten has 10 birdies and just two bogeys through the first two rounds.

“It’s point and shoot out here pretty much,” he said. “The greens are soft, and I’m just trying to take advantage of it.”