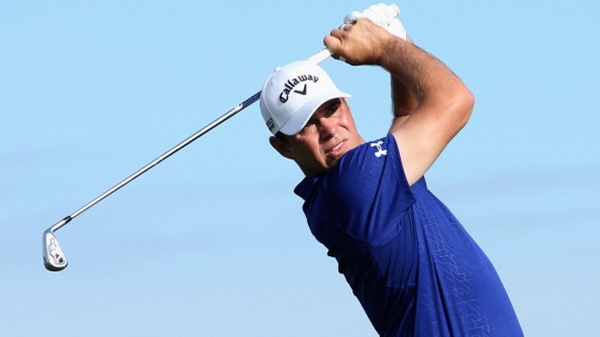 SAN DIEGO – Tiger Woods was right. The South Course at Torrey Pines is playing about as tough as it did for the U.S. Open in 2008.

But that’s the only similarity.

Woods won that U.S. Open. He won’t even have a tee time in the final round at the Farmers Insurance Open.

Gary Woodland used power to his advantage Saturday – oddly enough, everywhere but on the par 5s – to pick up five birdies in his round of 2-under 70 that gave him a one-shot lead over Jordan Spieth and Marc Leishman going into a final day that won’t include Woods.

Instead of getting back into the tournament, the defending champion and eight-time winner at Torrey Pines delivered a shocking performance. Woods went seven straight holes making bogey or worse and wound up with a 79, matching his worst score on American soil.

Woods left town without speaking to reporters and with an “MDF” next to his name, which probably should have been “OMG.”

That’s the PGA Tour’s acronym for “made the cut, did not finish.” Because more than 78 players advanced to the weekend, there was a 54-hole cut for top 70 and ties. Only one other player, club pro Michael Block, had a worse score than Woods.

“You get going south on this golf course, you can definitely put up some numbers in a hurry,” Woodland said when he heard about Woods’ score. “I don’t think he’s too concerned about it.”

There’s plenty for everyone to be concerned about at Torrey Pines _ a beast of a course, thick rough, rock-hard greens, and nearly two dozen players so close to the lead that Sunday could be wide open.

Spieth had a one-shot lead to start the third round and it was gone quickly. He missed a 30-inch par putt on the opening hole and took a double bogey on No. 5. His biggest putt might have been a 6-footer for par on the 14th, and Spieth looked confident the rest of the way to salvage a 75.

Leishman had a relatively boring round of 72 on a gorgeous day along the Pacific – one birdie, one bogey, 16 pars. That might be what it takes on this monster of a course that features rough that might even make the USGA blush.

“If you let bogeys worry you on that golf course, it’s going to be a pretty long day,” Leishman said. “You don’t have to do a whole lot wrong to have a bogey.”

The average score on the South through three rounds was 74.24, compared with 74.97 during the U.S. Open. And keep in mind, the field for the Farmers Insurance Open is almost entirely PGA Tour or European Tour players.

San Diego native Pat Perez, who used to work the practice range as a teenager during this event, salvaged a 72 and was two shots behind with Morgan Hoffman (72). Ryo Ishikawa had a 69 and was in a large group at 5-under 211 that included Nicolas Colsaerts (75) and Andres Romero of Argentina, whose 67 was the best score of the day.

“When you play with Gary, who hits it 40 yards farther than I do, it doesn’t look that hard,” Perez said. “Where he hits it is unbelievable. But it was a lot harder today.”

Twenty-two players were separated by four shots going into Sunday.

Everything was in place for a good show except for the tour’s two biggest stars. In the first network telecast of the year _ and the first Sunday in golf without going against the NFL playoffs – Woods was out of the tournament and Phil Mickelson pulled out Friday night after making the cut because of muscle pain in his back.

Woodland has been heading north since winning the Reno-Tahoe Open last year. He contended at The Barclays, lost in a playoff in Malaysia and now feels confident about who’s in charge at San Diego. Yes, the South is a beast. But the Kansas native hits it a long way.

Then again, he made par on all of them, including a three-putt pars on the sixth and 18th holes. That was OK, for Woodland had nothing more than a wedge in on No. 1, and he collected a pair of birdies on the par 3s. His only lapse was a double bogey on No. 17 from a bad lie in the bunker and a three-putt.

“If I drive the ball in play, I’m playing a little different golf course than most guys are playing,” Woodland said.

Spieth, with a chance to move into the top 10 in the world with a win, hits the ball plenty far. He just wasn’t very straight. The Texan pulled his opening tee shot and struggled to find fairways the rest of the day. He hit only five of them.

The steady finish left him confident about collecting his second PGA Tour win.

“Only one shot back and a bunched leaderboard,” Spieth said. “It’s going to take a good score tomorrow. … I’m excited about tomorrow. I had some great saves down the stretch today, so take that momentum.”

Woods thought he had some momentum, coming off a birdie on the 17th hole and in the fairway on the par-5 18th with a shot at the green. He went into the water and made double bogey, then made another double bogey on the first hole with a three-putt. It was his first time with back-to-back double bogeys since the 2011 PGA Championship. And it only got worse from there.