Woods arrives at Valhalla to test ailing back 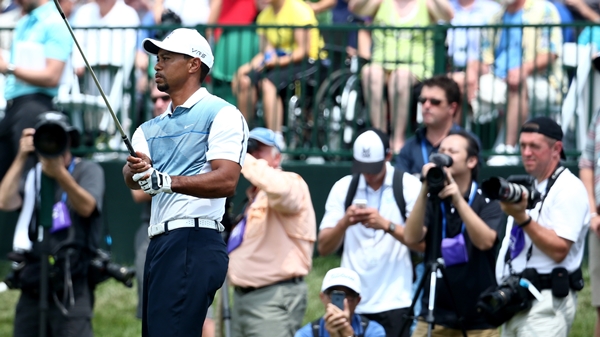 LOUISVILLE, Ky. – After a bit of confusion, Tiger Woods finally arrived at Valhalla on Wednesday.

Now, to determine if he’s fit enough to compete in the PGA Championship.

For three days, there has been speculation about whether Woods’ ailing back would allow him to play in the final major of the year.

He was at least going to give it a shot, after some miscommunication with the PGA of America.

The organization sent out a release about noon saying Woods was at the course. Then, officials said they weren’t sure he had actually arrived. About 1:15 p.m. EDT, Woods pulled into his reserved parking spot.

He didn’t seem be in any pain as he got out of the car and changed shoes.

Sporting sunglasses and a goatee, Woods headed straight to the driving range with caddie Joe LaCava. Hundreds of fans crowded around a staircase as he crossed over above them, snapping photos of the 14-time major champion with their phones. He pulled out a wedge and started his session with some easy half-swings.

Woods planned to play a practice round in the afternoon to see if his back is fit enough to tee off Thursday. He has never missed three majors in one year since he played his first one as a 19-year-old amateur in 1995.

Woods had back surgery on March 31 and was out for three months, skipping the Masters and the U.S. Open. He returned in late June for the Quicken Loans National at Congressional, where he missed the cut by four shots. He finished 69th at the British Open.

At the Bridgestone Invitational on Sunday, Woods injured his lower back on the second hole of the final round after hitting an awkward shot from above a bunker and landing hard when he jumped back into the sand.

He was driven off the course after his tee shot on the ninth hole and headed home to Florida for treatment.

This was the latest Woods has ever arrived for a major. He has not seen Valhalla since he won the PGA Championship in 2000 in a playoff over Bob May. Woods was recovering from reconstructive knee surgery in 2008 when the Ryder Cup was played on the Jack Nicklaus design.

Now, that spot is filled.

“He still has a huge impact, especially on the media side,” Rickie Fowler said. “You can see all the attention with last week WD’ing and this week not registering, not sure if he’s playing yet. I want to see Tiger around, but I want to see him healthy and at his best.”

Woods must win the PGA Championship to qualify for the FedEx Cup playoffs.

More realistically, he wants to show U.S. Ryder Cup captain Tom Watson that he is healthy enough to be one of three wild-card picks for the September competition in Scotland.

“I can’t answer that yet,” Watson said Wednesday, speaking right about the time Woods arrived. “A lot can happen between now and then.”

Watson said he would take Woods’ at his word on the condition of his back.

“He’s always been straight up with me,” Watson said.