Woods atop leaderboard, but only briefly in the Bahamas 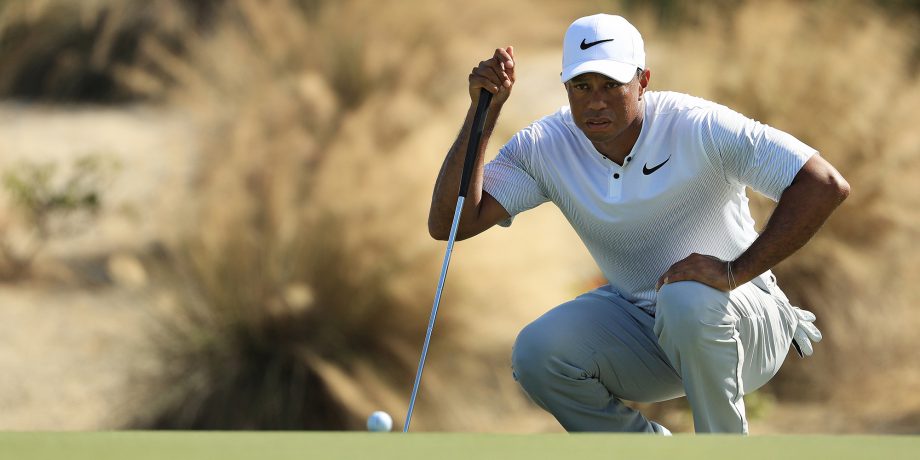 NASSAU, Bahamas – One of the biggest cheers at the Hero World Challenge came from seeing the name Tiger Woods moved to the top of the leaderboard.

It just wasn’t there for long.

In another impressive showing in his latest comeback from back surgeries, Woods built on a solid start with a 31 on the front nine at Albany Golf Club that briefly gave him the lead Friday. He stalled on the back nine with a pair of bogeys and not enough birdie chances, and he settled for a 4-under 68.

“Successful,” Woods said, when asked to describe his round in one word.

When the second round ended, Woods was five shots behind Charley Hoffman, who had a 63 that might have sent fans into a frenzy if they had been watching.

Hoffman made 12 birdies, closing with five in a row . He was at 12-under 132 and had a three-shot lead over Jordan Spieth (67) and Tommy Fleetwood (69). Hoffman made only one par over his final 12 holes to go along with eight birdies and three bogeys.

But this week, a holiday exhibition with an 18-man field and no cut, is all about Woods. That much was obvious after the round.

Hoffman spoke to no more than five reporters about his round, while a dozen others were about 30 feet away surrounding Joe LaCava, Woods’ caddie, looking for any additional morsel about his round.

Woods delivered plenty on his own. He opened with three birdies in four holes. He made three good pars, one of them having to chip up the slope from a thin lie on No. 8, and then really raised hopes with his eagle on the par-5 ninth, set up by a 3-wood into the wind from 265 yards.

“Hit up in the air and took something off of it and cut it back into the wind,” he said.

He made the 20-foot putt to reach 8 under. Behind him, Hoffman made bogey on the par-3 eighth. Woods was alone in the lead, and the workers at the white scoreboard to the left of the green quickly moved his name to the top as some 100 people – that constitutes a large gallery this week – began cheering. There was a smattering of “He’s back!” and even a few mentions about the Masters.

Woods missed it. He was on his way to the 10th tee. By the time he saw a leaderboard, it was getting crowded at the top with Hoffman making his run, Spieth chipping in for birdie and setting up another with a tough chip, and Fleetwood overcoming a double bogey-bogey start to his back nine with three straight birdies.

“I saw somewhere on the back nine, I think there was like five guys at 8 under or something like that, something weird like that,” Woods said.

A case could be made that his name among them was weird.

His past is enough to merit legend status in this field. Woods has 79 victories on the PGA Tour, compared with 81 for the rest of the field. But he hasn’t won in more than four years, and this is only his 20th start since the first of four back surgeries in the spring of 2014.

He had played only seven rounds dating to August 2015, and this was his first competition in 10 months. He had fusion surgery on his lower back in April.

Not many can land it this soft with a 3-wood from 270 yards away.#ShotOfTheDay pic.twitter.com/5NrC5NbG8t

“You’ve got to be anxious – doesn’t matter who it is, doesn’t matter how well he’s been in the past at handling pressure,” Spieth said. “It’s still a new experience for him to have that little golf. And to come out and play competitive golf and work his way into contention, that’s what’s really exceptional.”

Woods didn’t make a bogey until a three-putt from 30 feet on the 12th hole. The greens were quicker, and that’s where he struggled. He had an eagle attempt from just short of the 15th green, about 45 feet away, that he ran 15 feet by the hole. He missed that for a three-putt par.

He still played the par 5s in 4 under, a five-shot improvement from the opening round.

And he showed his creative side on the par-3 17th. Facing a long putt over a hump with the grain running away from him, Woods chose to chip it off the putting surface and along the fringe to be able to better judge the speed. It settled 3 feet away for a par.

Otherwise, he looked like any of the other elite players at Albany. And while he wasn’t sure what to expect coming into the week, his expectations are getting stronger with each round, especially this one.

“I felt like today I could have easily gotten to double digits under par,” he said. “That would have put me probably one or two back, but I think I’m still in it. We’ve got two more days, and I think it’s supposed to blow a little harder to tomorrow. If that’s the case, I think a good, solid round should get me up there.”

That depends on Hoffman.

“I said at the beginning of the week, I hope he wins,” Hoffman said. “It’s great for the game of golf. Hopefully, I can stop him from winning this week. But anytime he’s in contention, or even playing the golf tournaments, it brings a buzz to golf that we all need.”