Woods claims share of lead at Wyndham after shooting 65 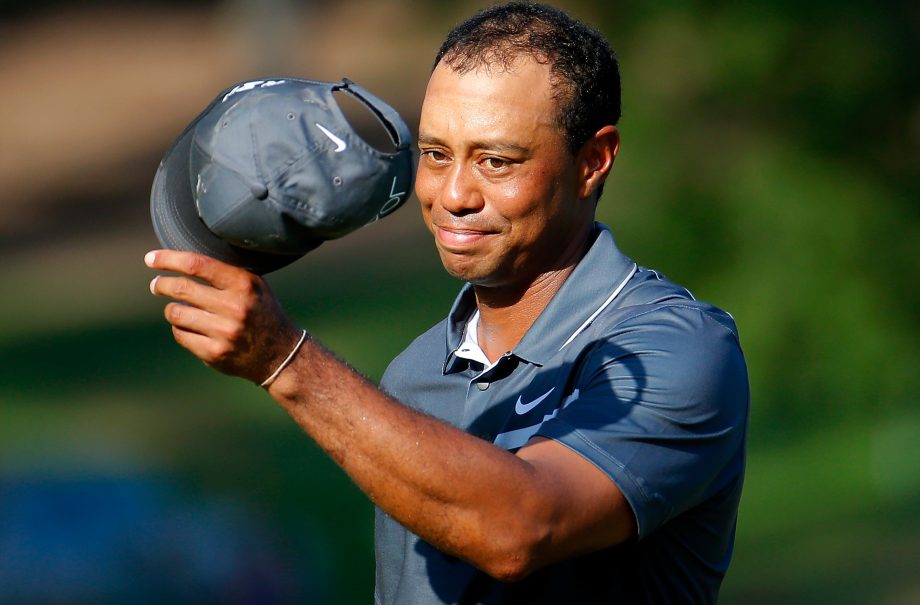 Tiger Woods reacts after his par putt on the 18th green during the second round of the Wyndham Championship at Sedgefield Country Club on August 21, 2015 in Greensboro, North Carolina. (Kevin C. Cox/ Getty Images)

GREENSBORO, N.C. – Tiger Woods signed up for his first Wyndham Championship knowing a win would definitively keep his season from ending.

Woods shot a 5-under 65 on Friday to share the second-round lead with rookie Tom Hoge.

The sport’s biggest name put himself in prime position to contend for his first victory in more than two years, one that would send him into the FedEx Cup playoffs.

He made his big move up the leaderboard on the back nine, with birdies on Nos. 12 and 13 and an eagle on the par-5 13th that gave him a share of the lead.

“I just couldn’t get anything out of my rounds (before this tournament) and a couple lucky bounces here, take advantage of those opportunities – it’s just the flow,” Woods said.

Now he’ll spend Saturday playing with an unfamiliar rookie. When asked if he would recognize Hoge to see him, Woods responded: “No, I wouldn’t. What is it, or him?”

“I look on the Champions Tour leaderboard and I know every one of those guys because I played against them and I played with them,” Woods said. “Now I come out here, I don’t really know a lot of people.”

Davis Love III and Chad Campbell were a stroke back. Campbell shot 65, and the 51-year-old Love had 66.

Brandt Snedeker matched the tournament record with a 61 that put him in a group of six players two strokes behind Woods and Hoge.

But for the second straight day, the big story at Sedgefield Country Club was Woods.

He missed the cuts in the last three majors and hasn’t finished better than a tie for 17th at the Masters. At No. 187 on the FedEx Cup points list, he would definitely crack the top 125 with a win and qualify for the Barclays next week in New Jersey. Depending on how the math works out, a solo second-place finish also might be enough.

He took advantage of some prime scoring conditions during the first round, shooting that 64 on a course softened by showers that morning. That left him two strokes off the lead.

And then, playing under a hot afternoon sun that sped up those undulating greens, Woods almost matched it.

“I wasn’t quite as sharp as I was yesterday,” he said.

He capped that run of consecutive birdies with a 25-foot putt on the 13th that drew a mighty roar from the huge gallery.

Then came his eagle.

He placed his second shot about 10 feet behind the hole and, after his downhill putt fell into the hole, he followed with his trademark fist pump.

And as strong as his round was, it also easily could have been even better.

He settled for birdie on the par-5 fifth when his 10-foot eagle putt lipped out, then missed a 15-foot birdie putt on the next hole. He left a 10-foot birdie putt an inch from the hole on the ninth.

“I’ve shot 59 and I left a couple shots out there,” Woods said. “The great thing about golf, you can always get a little bit better.”

Love, a former University of North Carolina player whose two wins in the tournament came across town at Forest Oaks Country Club, played a practice round with Woods on Tuesday. Several times this week, Woods has referred to pointers Love gave him, notably

Love reeled off three straight birdies early in his round before closing with 10 straight pars.

“It will look boring on the card … but I made some nice putts for par, and some good up and downs, and kept the round together,” Love said.

Hoge, who was born about 70 miles away in Statesville but grew up in North Dakota, shared the first-round lead with William McGirt and two-time heart transplant recipient Erik Compton.

Hoge, who had two top-10 finishes in the past month, followed his opening-round 62 with another low number with birdies on three of his final five holes.

“Obviously, a new position for me,” Hoge said.

Snedeker – who won the Wyndham in 2007, its last year at Forest Oaks – shot just the fifth 61 in the history of the event and the first since Tim Herron three years ago.

He finished his round with back-to-back birdies on the eighth and ninth holes, closing by sinking a 50-foot putt.

“I was trying to shoot 7 under in my mind, get back in the mix, and to shoot 9 (under) was definitely something I wasn’t expecting on the range this morning, but great to get it,” Snedeker said.

For some players, the priority was to earn enough points to qualify for the playoffs or keep their tour card for next year.

For others, their bubbles burst: No. 131 Billy Hurley III, who came to Greensboro the day after his father’s funeral in an attempt to secure his card, shot a 70 and missed the cut.