Woods delivers highlight shot in opening round at Players 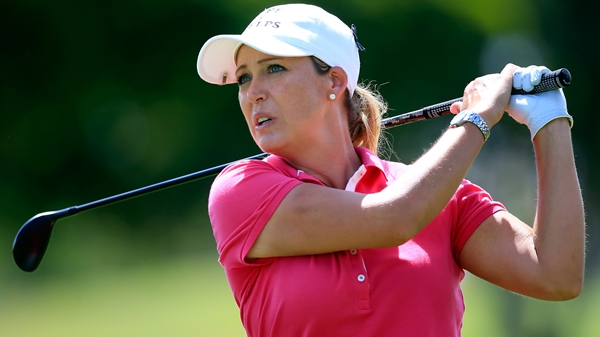 PONTE VEDRA BEACH, Fla. – With his feet positioned near wooden planks and his ball resting on the fringe at the treacherous island green, Tiger Woods tried to decide between bellying his sand wedge and toeing his putter.

He went with the iron.

Good call. It resulted in Woods’ most memorable – maybe even best – shot during the opening round at The Players Championship on Thursday.

Woods holed out from the edge of the daunting par-3 17th at the TPC Sawgrass, making a highlight shot that helped him shoot 1-over 73 in windy conditions. Woods ended the day six shots behind the leaders but feeling good about his game.

“Probably the highest score I could have shot today,” said Woods, who was over par in the first round for the fifth consecutive event. “I didn’t get much out of that round. I hit the ball better than the score indicates, and I got a couple good breaks and never took advantage of them.

“Just really struggled hitting the putts hard enough to get them to the hole. Even when I tried to ram them, I still didn’t get the ball to the hole, so I need to make a better adjustment on that.”

Maybe he should just go with the wedge.

It worked to perfection at the 17th.

His ball hit the back of the cut, rolled around and dropped. He smiled, tipped his hat to the raucous crowd and looked as if he had found a little something with back-to-back birdies that got him to 1 under as he walked to the 18th tee

But he failed to stay in red numbers on the final hole.

Woods took an aggressive line and found the water off the tee. He finished with a double-bogey 6.

“I tried to hit kind of a low, hard, cut 3-wood up there and just kind of bank it up against the wind,” he said. “I just tried to hit a low one, tried to get on top of it and I just happened to pull it just a touch. It was the right shape, the right height, but my start line was probably just a few yards left, which ended up costing me.”

It was one of just a few errant shots for Woods, who won The Players the last time he played in 2013.

He yanked his first two drives left, leading to a bogey at the par-4 first, and really turned heads when he shanked his tee shot at the par-3 eighth. His ball bounced into a water hazard he said he didn’t even know was there. He dropped and ended up with a double.

“It’s only one bad swing, one bad shot,” he said. “I had to fix what I had starting out the round more importantly. Eight just, I just happened to make a bad swing. So what, move on. But I had a bad pattern starting out and I rectified that, which was nice.

“I put together a pretty good round and until 18.”

Woods missed seven months across parts of last year while recovering from back surgery. He sat out two months this year to work on his game – particularly his chipping – after posting a career-high 82 in the Phoenix Open and withdrawing during the first round at Torrey Pines because of tightness in his back.

He has shown much better form since – especially with that nifty shot at the 17th.