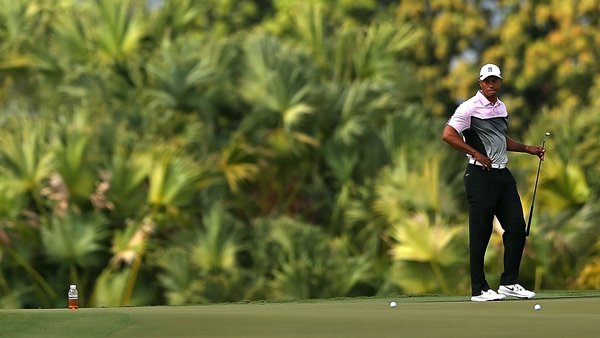 DORAL, Fla. – The only tools Tiger Woods used Wednesday at Doral were a wedge, a putter and a gold pair of scissors.

Three days after he withdrew in the middle of the final round at the Honda Classic with lower back pain, Woods returned to work at the Cadillac Championship by saying he feels better after a few days of constant treatment, and that he was good enough to try to defend his title.

He just won’t be playing the new Blue Monster until the opening round Thursday. Still being cautious about back spasms, Woods said he would chip and putt while walking a course that is entirely different from the one where he has won four times.

As for the scissors?

That was for the ceremonial opening of the Tiger Woods Villa at Trump National Doral.

Woods playing Doral was not a big surprise. The last time he dealt with back spasms in the final round was at The Barclays last August (he tied for second), and he played the following week outside Boston.

Even so, it was the second time in 10 tournaments that Woods experience back pain during a round. It was the fourth time in five years that he withdrew in the middle of a round because of injury. For a guy with four surgeries on his left knee, the focus has shifted to his lower back.

“I think we have to take a more global look at it, absolutely, because it comes and goes,” Woods said. “We’ve got to make sure that we do preventative things to make sure that it doesn’t happen and adjust certain things, whether it’s swing, lifting, whatever it may be. You have to make certain adjustments. We’ve done that throughout my entire career, and this is no different.”

His health is only part of the drama at Doral.

The lone applause at the end of a 20-minute press conference came from Donald Trump, who took over the resort and whose presence is everywhere. The majority of the 69-man field at this World Golf Championship is gearing up for the Masters next month. And at stake this week is a possible change atop the world ranking.

Woods returned to No. 1 nearly one year ago when he won at Bay Hill. Now, it’s Masters champion Adam Scott who has a mathematical chance of being No. 1 for the first time in his career provided he wins this week.

“It would be a dream come true to make it to that point, but it’s not necessarily probable, either,” Scott said. “If you look at stats and numbers, there’s no reason why I’m just going to roll out and win this week. But there’s great motivation for me to do that.”

The motivation for Woods is to complete 72 holes without injury. It’s being fit for the Masters, his next chance to end a five-year drought in the majors.

“It’s been a long couple days of just treatments nonstop, trying to get everything calmed down,” he said. “First of all, get all the inflammation out and from there, getting the firing sequence right again, getting everything firing in the proper sequence. And once we did that today, feels good.”

He did hit balls Tuesday at his home in Jupiter Island, no shot longer than 60 yards, mainly an attempt to make sure he kept the feel with his hands on a golf club. His caddie came down to Doral and charted the course, giving Woods an idea of what to expect.

That wouldn’t do it justice.

There is water just about everywhere, including a new lake on the 15th and 16th holes that figures to play a big role in the Sunday finish. The PGA Tour issued a release detailing the changes:

Now if Woods can only rebuild his body. He turned 38 last year, though health concerns are nothing new. He had the first of his four knee surgeries while at Stanford. He said he first experienced back pain in college.

“I’ve had a knee injury, wrist injury, elbows, you name it. Now I’ve had back, neck. It’s the nature of repetitive sport,” Woods said. “We do the same motion. Some guys do it a thousand times a day, but it’s the same exact motion. So you have repetitive injuries and most of my injuries are that. So that’s the nature of why we lift, why we work out – to prevent a lot of these things and keep us healthy and keep us out here.

The real concern is his back, however.

Woods said even with shredded ligaments and two stress fractures, he was able to win the 2008 U.S. Open at Torrey Pines because the pain didn’t arrive until after he had launched his shot. He said at the Honda Classic, his movement became so restricted that he couldn’t rotate his body. The pain occurred as he was starting his swing and affected how he struck the ball.

“A bad back is something that is no joke,” he said. “With the back, it’s a totally different deal. There are certain movements you just can’t do. That’s one of the things I’ve started to learn about this type of injury. It’s very different.”