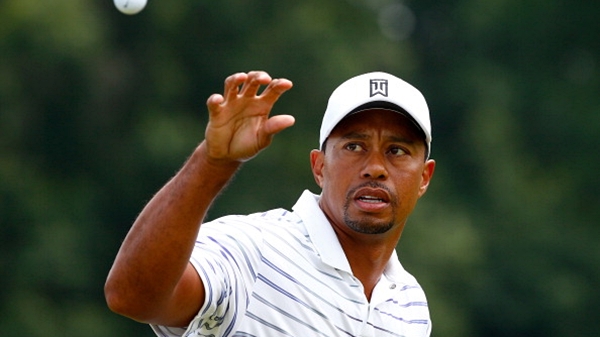 AKRON, Ohio – Tiger Woods finds out over the next two weeks if his season is over or just getting started.

The first stop is Firestone, where Woods is an eight-time winner and the defending champion. After that, he heads to Valhalla Golf Club for the PGA Championship, where he won in 2000 on his way to an unprecedented sweep of the majors.

At stake is a chance to extend a season already cut short by back surgery.

“I would like to win these two events and not have to worry about anything,” Woods said Wednesday. “That’s the plan. That’s the mindset. That’s the focus. We’ll see how it falls after these few weeks. I’m so far out of it right now that I need to play well to … get myself into the playoffs and ultimately – hopefully – play all four weeks.”

It’s hard to believe that just one year ago, Woods won this World Golf Championship by seven shots for his fifth victory of the year.

Not much has gone his way since then, mainly because of back pain that eventually led to surgery on March 31 and kept him out for three months. The Bridgestone Invitational will be only his third tournament since his return from surgery a month ago at Congressional, where he missed the cut.

And during his time at home, his position in two key standings plunged.

He is No. 70 in the Ryder Cup standings, so far away from being among the nine automatic qualifiers after next week that even if he were to win at Firestone, he wouldn’t even crack the top 20 in the standings.

At least he is playing courses that bring happy memories.

Woods has been so dominant at Firestone that he averages $10,138 for every hole he has played in competition dating to 1997. His victory last year was the third time he had won at Firestone by at least seven shots.

But that’s because he was playing well.

Firestone also is the course where he finished 30 shots out of the lead in 2010, a week before he hooked up with Sean Foley, his third swing coach as a pro.

“There’s no secret formula,” he said. “It’s just go out and play well. This golf course is right in front of you. There’s no hidden secrets out here. You’ve just got to go out there and play well.”

Different from previous injuries is that Woods said he returned to competition not much longer after he was fit enough to play. After various knee injuries, he worked himself into shape by playing a lot of golf at home. This time, he only got in a couple of rounds.

Missing the cut at Congressional was satisfying because he knew he was pain-free. Finishing in 69th place at the British Open – his worst position at a major when making the cut – was more of a disappointment. Woods said he is progressing, though it starts with eliminating mistakes.

“My good shots are still really good,” he said. “My bad shots need to be in positions where I know I should miss the golf ball, instead of places where I have been missing it.”

The field is the toughest of the year for the World Golf Championships, missing only Dustin Johnson (No. 16) from the top 50.

Rory McIlroy is playing for the first time since his wire-to-wire win at the British Open two weeks ago. Woods is playing the opening two rounds with Martin Kaymer, who went wire-to-wire at Pinehurst No. 2 to win the U.S. Open.

McIlroy and Henrik Stenson each have a mathematical chance to replace Adam Scott at No. 1 in the world.

Some of the pairings for the opening two rounds are a reminder that the Ryder Cup is not too far away. Justin Rose is playing with Rickie Fowler, who has finished second in the past two majors. McIlroy is playing with Matt Kuchar. Jordan Spieth is paired with Victor Dubuisson of France, both expected to be Ryder Cup rookies.

Woods and Kaymer would be another Ryder Cup attraction – assuming Woods is on the team. U.S. captain Tom Watson has said he wants Woods on the team, provided he is healthy and playing well. At the moment, Woods is healthy.

“I think what it’s going to boil down to, would be my guess, is how healthy Tiger is and how he feels like his game is,” said Jim Furyk, who has secured his spot on the team for the ninth straight time. “But it’s hard to imagine not having a healthy Tiger Woods on the team. He’s arguably the best player ever. If he’s healthy and he’s been playing, it’s hard to imagine he wouldn’t be on the team. But that’s not my call.”

That decision is for Watson.

And Woods can make it a lot easier depending on how he plays the next two weeks.