Woods in contention at Quicken Loans after 5-under 66 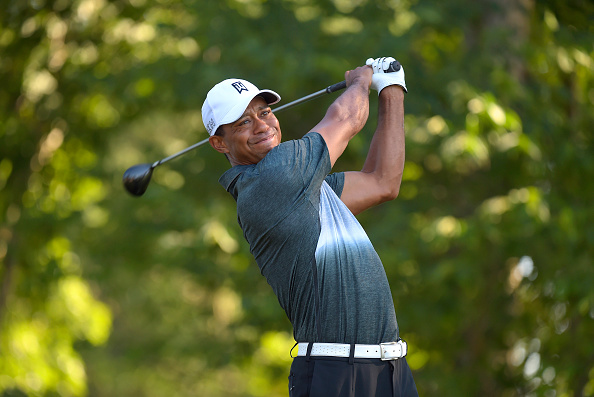 GAINESVILLE, Va. – Tiger Woods showed a rare flash of anger on a mostly stress-free day when his second shot on the eighth hole failed to clear a massive fairway bunker. The best he could do was to squeeze it onto the front of the green.

The mistake on the par-5 hole set up the signature moment of a 5-under 66 on Friday in the Quicken Loans National that put Woods in contention for his first victory in nearly two years.

Woods sank the 36-foot birdie putt, which broke hard to the right and trickled over a crest and into the hole. He celebrated with a vintage fist pump and smile.

“If I keep hitting good putts, eventually they’re going to go in,” Woods said. “I made my share on my back nine and especially that bomb on eight. That was a bit lucky, but I’ll take it.”

Woods is the host and a two-time winner of the Quicken Loans National, which is being played at RTJ for the first time.

His 66 was his best score in relation to par this year and only his seventh round in the 60s. In eight previous starts this year, he missed three cuts and withdrew once. His best finish is a tie for 17th at the Masters.

Two years ago, Woods was ranked No. 1. Since then, he has had back surgery and changed his swing. Earlier this year, he struggled to make solid contact on basic chip shots. His ranking has plummeted to 266th.

“I know what I’m doing out there. It’s just a matter of time before things start to click in,” Woods said. “People want the immediate fix, the one tip that’s going to work for the rest of their life. It doesn’t work that way.”

Woods started on the back nine and made three pars before a shockingly bad tee shot on the par-5 14th. He slammed his driver to the turf as the ball traveled only 161 yards and failed to reach the fairway. That led to his only bogey of the day.

“That kind of got me kick-started a little bit. Got me a little fired up,” Woods said.

On the next hole, he twirled his driver in satisfaction as the ball sailed down the middle of the fairway. He hit his approach to 3 feet for his first birdie of the day. From then on, he put on a flawless display of ball-striking.

Another long, accurate drive on the 18th led to a 10-footer for birdie. On the first hole, he laid back with a 3-wood before hitting 9-iron to 5 feet for another birdie.

On the par-3 fourth, playing at 223 yards, he attacked a difficult pin and made a 20-foot putt, raising his putter in the air as the ball dropped. He added a two-putt birdie on the par-5 fifth before his dramatics on 8.

While Woods is trying to salvage his season, Fowler is hoping to build on a career year. Fowler won The Players Championship in May and the Scottish Open in July, doubling his career victory total.

He struggled with his driver Friday but made up for it with putting. On the 18th, Fowler raised his putter and started walking before his 27-foot birdie putt went down, and then high-fived caddie Joe Skovron.

“Probably hit it worse today,” Fowler said. “I wouldn’t say I putted any better, just happened to get some that went in.”

Playing three groups behind Fowler, Ishikawa had made four birdies and four bogeys when he nearly made his second hole-in-one of the tournament, hitting a 9-iron to 2 inches on the short par-3 16th. He tapped in for birdie and followed that up with a 13-foot birdie putt on 17 and a 31-footer on 18.

“My goal for this weekend is like 15 under, 16 under,” Ishikawa said. “So I’m just here focused on that number.”

David Lingmerth, enjoying a breakout season thanks to his victory at the Memorial, made five birdies on his final nine holes for a 65. He was two shots back.

The cut was 2 under, and Billy Hurley III made it on the number. After his second-round 70, he was informed that his father, Willard Hurley Jr., had been located after disappearing for nearly two weeks.

Woods was part of a group of nine players at 8 under. They included Jimmy Walker, who followed an opening 71 with a 63, including a holed fairway bunker shot from 112 yards for eagle.

“I don’t hit a lot of fairways anyway. It’s not that big of a deal,” Walker said. “Bunkers out here are nice. I hit some good shots.”