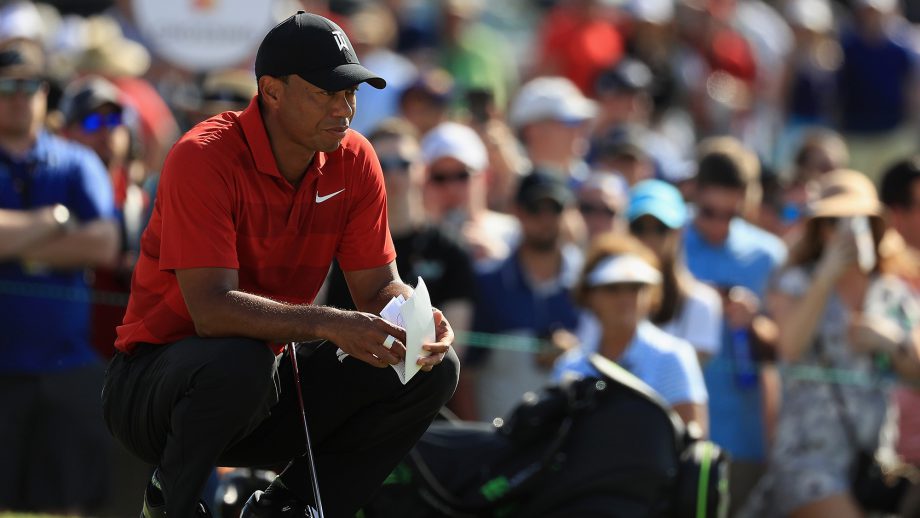 ORLANDO, Fla. – Tiger Woods put on a Sunday charge at Bay Hill that looked all too familiar.

One swing changed everything at the Arnold Palmer Invitational.

Coming off three birdies and two pars saves that brought him to within one shot of the lead, Woods hammered a tee shot so far left on the par-5 16th hole that it went over the fence, into a backyard and out-of-bounds.

A birdie or better turned into a bogey, and ultimately it didn’t matter when Rory McIlroy closed with five birdies in his last six holes to win. Woods made bogey from the bunker on the next hole and had to make a 12-foot par putt on the final hole for a 3-under 69 to finish eight shots behind.

The margin didn’t reflect the anticipation that Woods might win in his remarkable return from a fourth back surgery.

It was the second straight Sunday that Woods got within one shot of the lead on the back nine. His next stop is the Masters, which Woods has missed three times in the last four years and will be among the favourites at Augusta National for the first time in five years.

Woods was bothered more by the mental mistake than the swing on the 16th hole.

“I was caught. I didn’t decide what I was going to do,” Woods said. “That’s on me for not committing.”

A vintage Sunday charge.@TigerWoods is 3 under thru four holes on the back nine. #QuickHits pic.twitter.com/0aePOvXVrC

The 16th hole was playing shorter than usual at 496 yards with firm fairways. Woods didn’t hit the fairway the previous three rounds and still made birdie. He said his options were a driver that he could shape between the left rough and the bunkers on the right, or pound a driver over the bunkers, or simply hit a 3-wood down the fairway and have no more than an 8-iron into the green.

He opted for driver, and then couldn’t decide whether to shape the shot or blast it.

He blasted it, all right.

Woods watched it sail to the left and hung his head when he received the signal that it was out-of-bounds. He drilled the next tee shot 358 yards down the middle, hit wedge to 25 feet and missed the par putt.

“It’s not that hard of a hole,” Woods said. “I wasn’t committed to either one of the three shots I was supposed to hit.

Woods won all eight of his titles at the Arnold Palmer Invitational playing in the final group. He was five shots behind going into the final round, though he had nine players – including three major champions – in front of him.

He began creeping up on the leaders with birdies on the par 5s on the front. He was four shots behind going to the back nine when he began his run with five one-putts in five holes, three of them for birdie. When he made it from 15 feet on the fringe, he was one shot behind and the enormous crowd could be heard everywhere on the course.

Woods still had plenty of work left, and he knew it.

“Even though I got up there, I knew I had to keep making birdies. Those guys had so many holes behind me,” Woods said. “I got to 16 and figured I’ve got to play the last three in 3 under to have a chance. Even that wouldn’t be good enough the way Rory is playing back there.”

Moments after Woods’ tee shot when out-of-bounds, McIlroy made birdie putts of 15 feet on No. 13 and 20 feet on No. 14, and if that wasn’t enough, he chipped in from 40 feet on the 15th to start pulling away.

One thing was clear during the Florida swing. That red shirt on Sunday is back in vogue.

Woods finished 12th at the Honda Classic, was a runner-up in his first time playing the Valspar Championship and tied for fifth at the Arnold Palmer Invitational.

“If you would have asked me at the beginning of the year that I would have had a chance to win two golf tournaments, I would have taken that in a heartbeat,” he said.