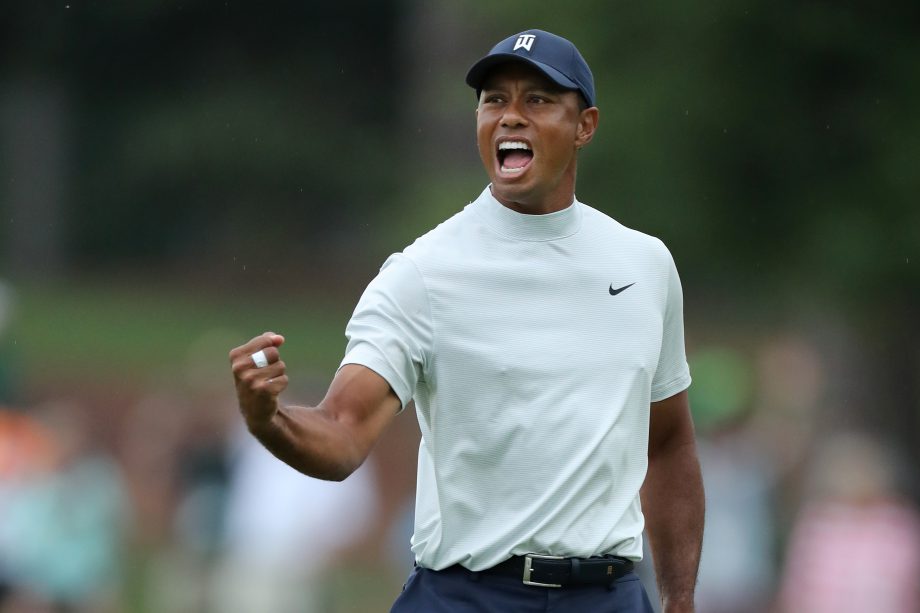 AUGUSTA, Ga. – Tiger Woods ran into the long leg of the law and escaped with a most unlikely birdie.

He just couldn’t take the next step – one more birdie on a back nine filled with so many chances – to join the largest 36-hole logjam in Masters history.

Golf’s best worked their way to the top Friday at Augusta National to set up a weekend pregnant with possibilities. Francesco Molinari, Jason Day, Brooks Koepka, Adam Scott and Louis Oosthuizen created the first five-way tie for the lead going into the weekend at the Masters.

All of them are major champions. Three have been No. 1 in the world.

Looming just as large was Woods, who made it look even more crowded at the top by making Augusta National sound as loud as ever. Despite missing two birdie chances inside 8 feet on the back nine, he holed consecutive 30-foot birdie putts for a 4-under 68.

One of those big birdies followed a bizarre moment on the 14th hole.

Trapped in the trees, Woods hooked a low punch toward the green and was walking toward the fairway when a Georgia Bureau of Investigation agent trying to contain the gallery slipped on the rain-slickened grass and slid into the lower right leg of Woods.

He managed to keep his balance, winced, hobbled and flexed his ankle repeatedly when he made it to the fairway. Then he turned trouble into a birdie and was walking just fine the rest of the way.

What’s happening is a weekend at Augusta National loaded with top players, and not just those tied at 7-under 136. Dustin Johnson, poised to return to No. 1 in the world after Justin Rose missed the cut, has looked effortless over two days and was one shot behind.

Nine players were separated by one shot, a group that includes seven major winners and five former No. 1-ranked golfers. Phil Mickelson, at 48 trying to become the oldest major champion, was three shots back. Justin Thomas and Rickie Fowler were four shots behind.

“This is really stacked,” Scott said. “I think it’s going to be an incredible weekend no matter what happens now.”

Corey Conners (71) of Listowel, Ont., was in a group tied for 16th at 3-under par, four shots back of the leaders. Mike Weir of Brights Grove, Ont., missed the cut by a shot.

Woods has gone 14 years since he last won the green jacket, 11 years since his last major and had five surgeries – four on his back, the other to rebuild his left knee.

But he feels he’s getting closer.

“The last three majors, I’ve been right there,” Woods said.

He briefly held the lead Sunday in the British Open. He chased Koepka to the finish line in the PGA Championship. And now he goes into the weekend one shot behind, the closest he has been to a lead going into the weekend at a major since the 2013 British Open at Muirfield.

But that’s not just anyone he’s trailing.

Molinari, the British Open champion who has shown he belongs among the elite in golf, had a 67 and was the first to reach 7 under. Day was right behind, coping with nagging soreness in his lower back with a 67 to match the Italian.

Koepka, the U.S. Open and PGA champion, began with a birdie to quickly take the lead, only to hit out of the pine straw, off a tree and into the creek to make double bogey on the par-5 second hole. He made two more bogeys before reaching the seventh hole, and then pulled himself together to salvage a 71.

“You’re going to be tested in a major championship one way or another,” Koepka said. “I hit a bad shot; just got to suck it up and just keep going on. You’ve got a lot of holes left, and you can make up some ground.”

Scott was the only player to reach 8 under with a 2-iron into 5 feet for eagle on the 15th, only to miss a 3-foot par putt on the 16th. It added up to a 68 for the Australian who won the Masters six years ago, and has gone three years since his last victory.

He had a chance to win the PGA Championship in his last major until Koepka pulled away and Scott made a careless bogey at the end to finish third. He has shown flashes this year on the West Coast, at Torrey Pines and Riviera, but has geared his game toward this week.

Here he is, with a lot of company.

“Look, tomorrow is a very important day because there’s no doubt someone in the top 15, or a few of them, are going to play very well,” Scott said. “This is the best players in the world on the biggest stage that we all want to be in so badly.”

He made the only birdie on No. 11 all day, and hit his tee shot on the dangerous par-3 12th to 5 feet when the horn sounded. Woods returned and missed the putt, and then took three shots from 35 feet behind the par-5 13th green to lose another prime birdie opportunity. But he made it up for them with a couple of long birdie putts, and he had no complaints with his position.

“I feel like I played my own way back into the tournament,” Woods said. “I was just very patient today, felt very good to be out there doing what I was doing. This is now three straight majors that I’ve been in the mix and so it’s good stuff.”

As for Rory McIlroy, the career Grand Slam might need to wait another year. McIlroy played the par 5s in even – two bogeys, one par and an eagle on No. 8 that got him under par, but only briefly. He was only seven shots behind, but he had 35 players in front of him.