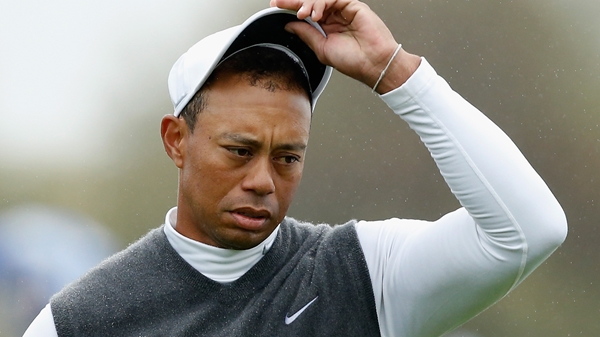 SCOTTSDALE, Ariz. – Tiger Woods never shot a score this high in his 1,267 official rounds as a pro.

He never looked more lost on a golf course.

Woods hit wedges fat and thin, but never close. He hit one drive into the water, another into the base of a desert bush. And when he missed a 10-foot par putt on his final hole Friday in the Phoenix Open, he had the worst score of his career – an 11-over 82.

Woods was in last place when he headed home to Florida to try to fix a game in disarray, even behind Arizona club pro Michael Hopper, who had yet to tee off. It was the first time in his career that he missed the cut in consecutive PGA Tour events, the most recent one in August at the PGA Championship.

About the only thing he didn’t lose was his sense of humor.

“I’m just doing this so I don’t get fined,” Woods said with a smile as he faced the media, repeating Marshawn Lynch’s only line at Super Bowl media day.

Even so, this round might have been more painful than getting his tooth knocked out last week in Italy.

His previous worst score was an 81 in the third round at Muirfield in the 2002 British Open, where he caught the brunt of whipping rain in 40 mph wind. There was only a light drizzle in the Valley of the Sun, and Woods hit a low point in his career.

He attributed his shocking play to his latest swing change, which he described in December as “new but old,” although this game resembles neither. He left Sean Foley during his four-month break to fully heal from back surgery and now has California-based Chris Como as a swing consultant.

“I was caught right between patterns, just old pattern, new pattern,” Woods said. “And I got better, more committed to what I was doing on my back nine and hit some better shots. But still got a lot of work to do.”

He scrapped plans to go to the Super Bowl and headed home to Florida to practice before returning next week to Torrey Pines.

The most glaring weakness remains the short game – chips, bunker play and putting.

Nothing was uglier than the par-3 fourth hole when his tee shot went over the green. The chip was difficult because he short-sided himself and was only 35 feet from the flag. Woods hit it 47 yards, the ball shooting low and hot all the way across the green and into a front bunker. He blasted out to 20 feet and two-putted for double bogey.

That was on his back nine, and by then, the only question was whether he would post the highest score of his career.

Woods pulled his tee shot into the desert on the tough 14th hole and it turned into a scavenger hunt. He headed toward a ball on the left side of the desert only to realize it wasn’t his – it was Mike Weir’s tee shot on the 13th hole. He stepped into a bed of cactus, reached gingerly through the needles to get the ball and realized that wasn’t his, either. His was found at the base of a bush, and he had to take a penalty stroke to remove it.

Then, a stock pitch shot from short of the green barely reached the putting surface, and he two-putted from 40 feet for double bogey.

In the gray morning sky of light drizzle, he didn’t realize until after his tee shot on the 15th that it never cleared the water. Woods hit a mid-iron for his fourth shot into a left bunker, and then bladed that out so far over the green that only the rough on the other side kept it from going in the water. He flubbed that chip and took triple bogey.

The atmosphere on the par-3 16th was slightly muted, though that didn’t keep a row of rowdies in the bleachers from wearing ski masks over their faces, a tribute to the mask Woods was wearing in Italy to hide his missing tooth. He was watching girlfriend Lindsey Vonn win a record 63rd World Cup race.

Jordan Spieth, playing in the group with Woods and Patrick Reed, had a 68. Both are among several young players who grew up watching Woods dominate golf with 14 majors and 79 wins on the PGA Tour. They did not see him shoot 82.

“Sure, it’s odd,” Spieth said. “But it’s his second tournament in six months. He’s really revamping his golf swing and just seems like he needs some more repetitions. From the looks of it, he looks very healthy, looks like nothing was bothering him. So he should be able to get out there and get a lot of practice in. I would look for him to make a strong comeback this year.”

Woods played the Phoenix Open for only the fourth time, and the first time since 2001. He still managed to generate plenty of memories. There was the hole-in-one on the 16th hole in 1997, the fans moving a 1,000-pound boulder for him in 1999, a teenager throwing an orange across the green as he was putting in 2001.

The support remained strong, but the message changed. What began on Thursday as “Welcome back,” turned into, “Thanks for coming.”