Woods returns with an eye to the past 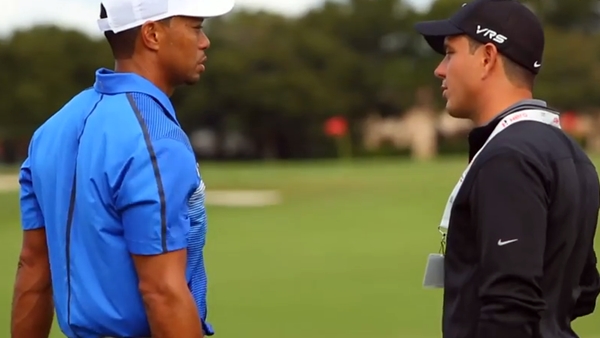 WINDERMERE, Fla. – Tiger Woods is making his latest comeback in golf with an eye to the past.

Equipped with a new teacher and a stronger body, Woods said Tuesday he is working on a swing that incorporates previous moves that date as far back as his amateur days. He referred to it as “new, but old,” and the 14-time major champion will start testing it this week against an 18-man field of elite players at the Hero World Challenge.

How old were some of those videotapes he watched of his previous swing?

“Actually, it’s pretty interesting trying to find a VHS recorder,” Woods said. “I have a lot of tape like that. Fortunately, my mom is of age where she has that still in the house. So that was very beneficial to look at some of the old tapes.”

This is the fifth time Woods has returned from injury – the back, this time – over the last five years. The breaks have ranged from four weeks to four months. He last competed on Aug. 9 when he missed the cut at the PGA Championship, ending the shortest season of his career (eight tournaments) and the first time he did not have a top 10.

Woods said he had enough time off to let his body heal and to think about where he wants his game to go.

“I think that physically, I just wasn’t able to do some of the things that we wanted to do in the golf swing,” Woods said.

Woods said there was no reason to look back at old swings at the time because he felt he was headed in the right direction – three victories in 2012, and five wins in 2013 in which he was voted PGA Tour player of the year for the 11th time. Those two years were relatively free of injuries.

“But unfortunately, physically I was getting damaged doing it,” he said. “So in retrospect, you look at it. Was I ever hurt when I was little? Granted, I don’t think we all were. I think we all could jump off roofs and nothing would break. But playing detective and looking back on it, you have to somewhat have an understanding physically of where you are at the time.”

He announced just over a week ago that he had hired Dallas-based Chris Como as a swing consultant, after longtime friend Notah Begay put them together.

Woods said he had a plan, and that Como was on the same page.

Woods did not delve into specifics of his swing, which he rarely did when going through an overhaul with Butch Harmon, then Hank Haney and Foley.

“It is new, but it’s old,” he said. “I say that because I haven’t done it in a very long time. We looked at a lot of video from when I was a junior, in junior and amateur golf. … And it was quite interesting to see where my swing was then and how much force I could generate with a very skinny frame. How did I do that? How do I generate that much power? That’s kind of what we are getting back into it.”

Even so, Woods concedes that age – he turns 39 at the end of the month – has kept him from overpowering golf the way he once did.

Along with four operations on his left knee, and problems with his Achilles tendon in 2011, Woods lately has been coping with back problems. He had surgery a week before the Masters and missed two majors. Upon his return in the summer, he had his worst 72-hole showing in the British Open and missed the cut in the PGA Championship.

“I’ve gotten stronger. I’ve gotten more explosive. I’ve gotten faster,” he said. “I now just need to hit more balls. But the body is good. I don’t have the sharp pain like I used to at the beginning of the year. I don’t have that anymore. I still have some aches and pains, just like anybody else who is my age and older.”

It took Woods about 18 months to work out the big change under Harmon, and about a year to adapt to changes under Haney. He won his first tournament just over a year after working with Foley. He doesn’t know how long this change will take, although he said the motor patterns are vaguely familiar.

“Am I game ready? Probably not quite as I would like to be,” Woods said. “How long does it take me to get back into the flow of a round? Sometimes it takes me a shot, sometimes it takes me three or four holes after a long layoff. I don’t know. We’ll see on Thursday.”

And, here’s a comparison of Tiger’s swing today from 2013.