Woods stumbles to a 77 in his return 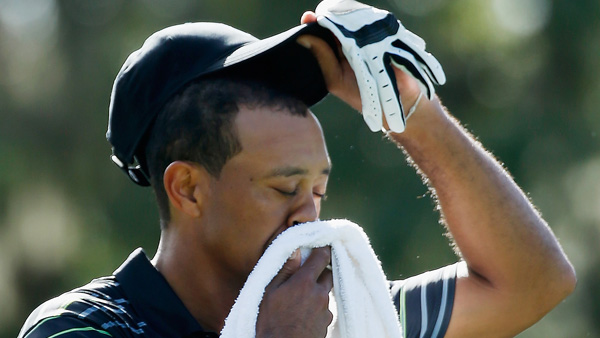 WINDERMERE, Fla. — Tiger Woods returned to competition Thursday and it was like he never left – except that he looked healthy.

Woods flubbed four chips around the green, only had four birdie chances inside 20 feet and stumbled to a 5-over 77 in the opening round of the Hero World Challenge at Isleworth, his home course for the first 16 years of his pro career.

He was in place among the 18-man field, already 11 shots behind Jordan Spieth, who is coming off a runaway win last week in the Australian Open.

“One of those days where nothing went my way,” Woods said.

The score was not nearly as significant as his health in what has been a lost year for Woods because of back problems. He had surgery a week before the Masters that kept him out for three months. He had not played since Aug. 9 at the PGA Championship because of lingering back issues, and the need to build up his muscle structure.

Woods missed the cut at Congressional in June in his first tournament after back surgery. This time, he is coming back from injury and he is working with a new coach. In that respect, the score was not a surprise.

It was the 10th time in 12 rounds that he failed to break par since his first return in June.

Even so, some of the shots were shocking, especially around the green.

He flubbed one chip behind the eighth green on his way to double bogey and a 41 on the front nine. After his lone birdie at No. 12 – a wedge that spun back to tap-in range – Woods blasted a driver and hit a long iron that came up just short of reaching the top ridge. Instead, it rolled off the green and into a steep collection area.

His first pitch was too soft and rolled back down toward his feet. Woods came in too steep on the next pitch and the ball moved only a few feet forward, leading to his second double bogey. And on the par-5 17th, he was in another swale pin-high in two and flubbed his fourth chip, angrily swinging the club and turning his back while the ball slowly rolled back to his feet. He had to make a 10-footer for par.

“It is surprising that I could hit chips that poorly,” he said.

The 77 was his second-highest score of the year. He had a 79 on the South Course at Torrey Pines in January. What kept the day from being a total loss is that Woods reported feeling “zero pain.”

“I haven’t said that in a long time,” Woods said. “It’s very exciting to step up there and hit the drives I hit – especially on the back nine – and feel nothing.”

The opening drive set the tone for the day – and his return.

Woods was about to hit his first shot in nearly four months when he heard a loud click of a camera and backed off. Then, he tugged his 3-wood through the fairway, beyond an iron fence into someone’s backyard and presumably into a swimming pool. He had to hit another from the tee and did well to escape with a bogey.

Any questions about his back were answered on the seventh hole when he hit a long iron from an awkward stance just beyond the lip of a steep bunker. He wound up in a bunker right of the green, and took two shots to reach the green.

Rust would seem to be an issue, but it certainly wasn’t the case for Steve Stricker. He hasn’t played since the PGA Championship, either, yet Stricker made five birdies in a bogey-free round of 67 and was one shot behind Spieth, along with Dubai World Tour Championship winner Henrik Stenson, Zach Johnson and Rickie Fowler.

Woods played with Jason Day, who last competed at the Tour Championship three months ago. Day shot a 71. FedEx Cup champion Billy Horschel and Patrick Reed, both at 73, were the only other players over par on a warm, breezy afternoon.

Woods felt as though he hit the ball, though certainly not as close as we would like.

Even when he did hit the green in regulation – only four times in his opening 10 holes – he was never close enough for a reasonable birdie chance. He finally got that on the par-3 11th hole, only to miss a 10-foot putt.

When he hit his stride on the back nine, his putting was off. Woods missed a 3 1/2-foot birdie putt on the 14th, and he never came close on an 8-foot attempt on No. 16.

“Today was weird,” Woods said. “I didn’t feel like I hit it that bad. My short game was awful. Didn’t make anything. … Bad chips, bad putts and a couple of missed shots on the front nine on the wrong side compounded the problem.”