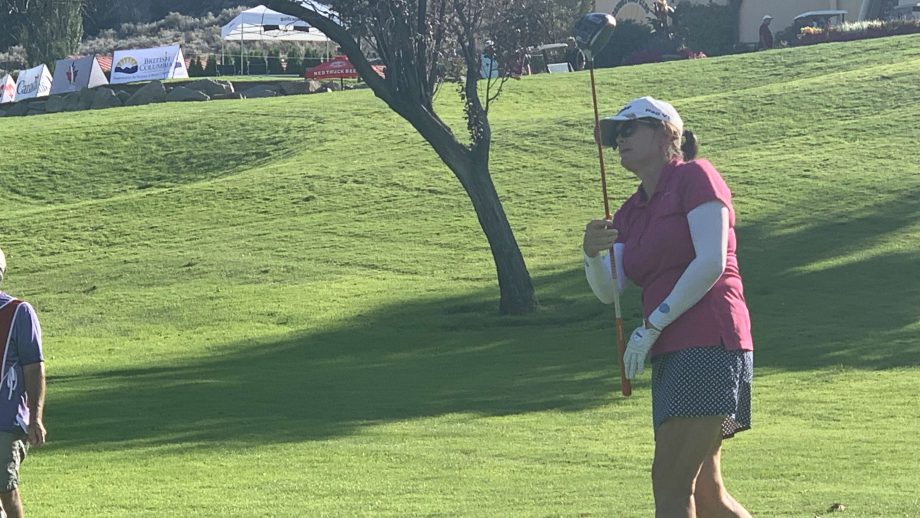 OSOYOOS, B.C. – Two-time defending champion Sue Wooster of Australia shot the low round of the day, a four-under par 69, to move into a tie for lead at the 49th playing of the Canadian Women’s Mid-Amateur and Senior Championship.

Wooster, who did not have a birdie in her opening round on Sunday, had six of them Monday at Osoyoos Golf Club. The difference was, she sunk some putts.

“You asked the question yesterday, what did I have to do, and I said hit the ball closer and sink some putts,” Wooster said. “I did that today.”

The Melbourne resident also put in some considerable time working on her putting and trying to get a better feel for the greens at Osoyoos Golf Club.

“I spent probably an hour and half last night on the putting green,” Wooster said. “I have come from the U.S. Amateur and the greens were running 13 and half. I think I was still in that mode. I was stroking it too soft and needed to get a bit of firmness.”

Wooster shares the lead with Nonie Marler of Vancouver at two-under par.

Wooster has the lead in the Mid-Master and Senior divisions.

Marler, the first-round leader, shot an even-par 73 Monday to remain at two-under. She chipped in for eagle on the par 5 18th hole — her ninth hole of the day — to exact some revenge on the hole. On Sunday, Marler three-putted the 18th green for a frustrating par.

Marler’s eagle came after her 8-iron approach rolled through the green and onto the back fringe.

“It put me in a bit of a precarious situation,” she said. “I would have had to go over the first cut and the upper part of the rough if I wanted to putt it. I couldn’t do that. I took out my wedge and I just committed to it and I figured if I land it where the rough sort of ends it will at least give me a shot at a birdie putt. And it turns out I didn’t need the birdie putt.”

Marler, a commercial realtor who is only eligible for the Mid-Amateur competition, felt she could have gone lower Monday given how well she struck the ball.

“My putter let me down a little bit,” she said. “I hit quite a few greens in regulation, so I was pleased with my iron play. I am going to do some work on my putting. That is sort of what was giving me a little bit of grief today. Some days you have it, some days you don’t have it.”

Judith Kyrinis of Thornhill, Ont., who won the Mid-Amateur, Mid-Master and Senior titles in 2016, is just one shot back of Marler and Wooster. She shot an even-par 73 Monday to remain at one-under for the tournament.

Jackie Little of Procter, B.C. leads the Super Senior division, which she won last year. Little fired a one-over 74 Monday and sits at three-over through two rounds. That is seven shots better than Holly Horwood of Vancouver and Ruth Maxwell of Reno, Nev., who share second place.