Yang maintains lead at US Women’s Open, Stacy Lewis 3 back 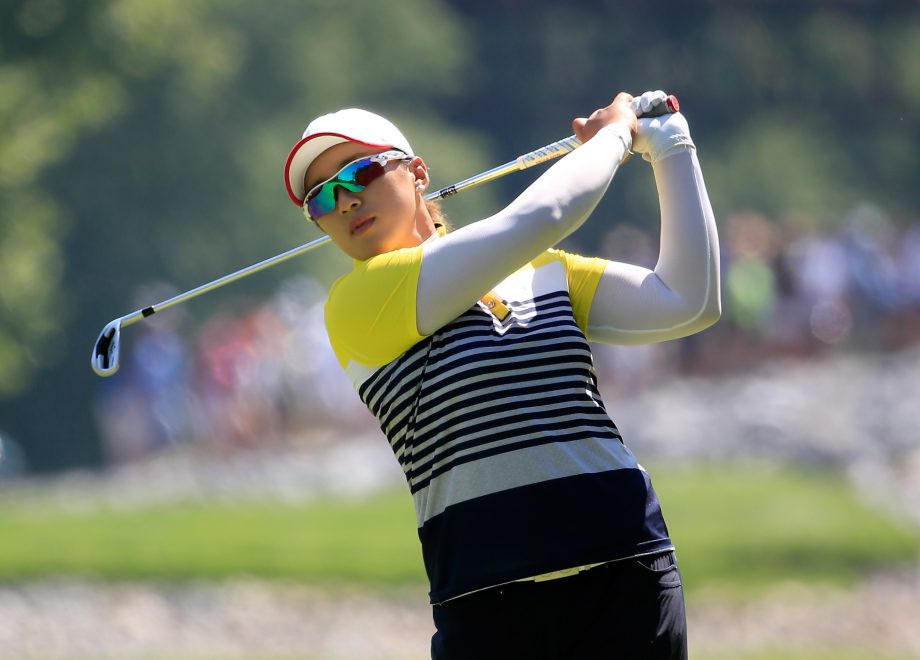 LANCASTER, Pa. – Amy Yang is back in the final pairing at the U.S. Women’s Open, and this time she’s prepared for the daunting challenge ahead.

The 25-year-old South Korean beat back all of Stacy Lewis’ challenges in the third round at Lancaster Country Club on Saturday, and the day ended as it started: with Yang three strokes ahead of Lewis.

On Sunday, for the third time in four years and fourth time in six, she’ll be in the final group at a U.S. Open. This time, she’ll have a three-stroke cushion over her nearest competitor and plenty of experience to draw on.

“It was good experience, the last two – the final group experience,” she said. “Me and my coach, we prepared. We practiced hard. I’ll go out there and I’ll just do my best, like what I practice.”

Yang shot a 1-under 69 Saturday, the same as Lewis, as the last pair off went toe-to-toe, giving the pairing a match-play feel.

Yang pushed her lead to four strokes at the 13th before Lewis capitalized on a two-stroke swing at the 14th, closing within two. But Lewis’ struggles with putting carried over to the 17th, where she made a three-putt bogey, sending Yang’s advantage back to three.

On “moving day,” all the action was outside the top two spots.

Defending champion Michelle Wie played with nagging hip and ankle pain, firing a 68. She is in a four-way tie for fifth at 2-under 208, along with two-time winner Inbee Park (70).

History was made in the third round when South Korea’s Chella Choi shot the first nine-hole score of 29 for the championship. But the 24-year-old missed a three-foot putt on her final hole that would have tied the championship’s single-round scoring record. She settled for a 6-under 64, shooting up the leaderboard into the pack at 2 under.

On Sunday, Yang will again be one of the last to tee off in the U.S. Open. She has been in the last grouping two of the last three years, and in 2010. At Pinehurst No. 2 in 2014, she played with Wie, was overtaken by eventual runner-up Lewis and settled for fourth. In 2012, she finished second to Na Yeon Choi, and placed fifth in 2010.

Lewis, a two-time major winner, figures she needs to solve the slippery, sloping greens of Lancaster Country Club if she’s to overtake Yang.

“It’s just the severity of these greens,” said Lewis, who is tied for 26th with 96 putts over three rounds. “And the moment you do try to hit one of those down the hill, that’s when you knock it five feet by. I don’t think the speed of the greens is that inconsistent; I just think it’s the slope within the greens.”

Chun is enjoying her run through her first U.S. Open. She was paired with two-time champion Karrie Webb on Saturday, saying she was 4 years old when the seven-time major winner turned pro. She offset three bogeys with five birdies in her round to stay in contention, albeit four strokes off the lead.

“Everything I experience here, it is new, completely new,” she said. “So this is an adventure to me. So tomorrow it’s going to be the same thing. Everything is going to be very fun. I just want to be enjoying every bit of the time.”

The hilly course in the heart of Amish country is taking its toll on the hobbled Wie. At one point Saturday, the 25-year-old, four-time winner was kneading her hip and thigh, trying to loosen her muscles.

“I just feel like there’s a knot in it sometimes and just trying to get it to go,” she said.

“Unfortunately it does get a little bit worse. It’s just a pretty hilly golf course. On flat lies, it’s OK. It’s just on the uphill shots,” she said.

Wie, 57th after the opening round, finally got into red numbers with a birdie at the second, but struggled to stay below par on the front nine. She gave a stroke back at the fourth before following consecutive birdies at the sixth and seventh with back-to-back bogeys closing out the side.

She finally got on track on the back side, posting birdies on the 10th, 12th and 13th to reach 3 under. But she gave another stroke back at the 16th and limped in with pars.

Wie is refusing to let the injuries that forced her to withdraw from Kingsmill earlier this year hamper the defense of her major title.

“It was a long day today,” Wie acknowledged. “I’m glad to be done … I’ve played with the pain for a while. I know what to expect, nothing is unexpected.

“I just feel like it’s coming together. I just want to keep the good feelings going and keep improving on them, gaining confidence in my good shots and learn from the bad ones.”

Of the five amateurs who made the cut, Megan Khang has the lowest score at 4-over 214, good for a tie for 37th.

There was a hole-in-one Saturday. Lee Lopez used a 6-iron to ace the 156-yard sixth hole, the 23rd hole-in-one in U.S. Women’s Open history.