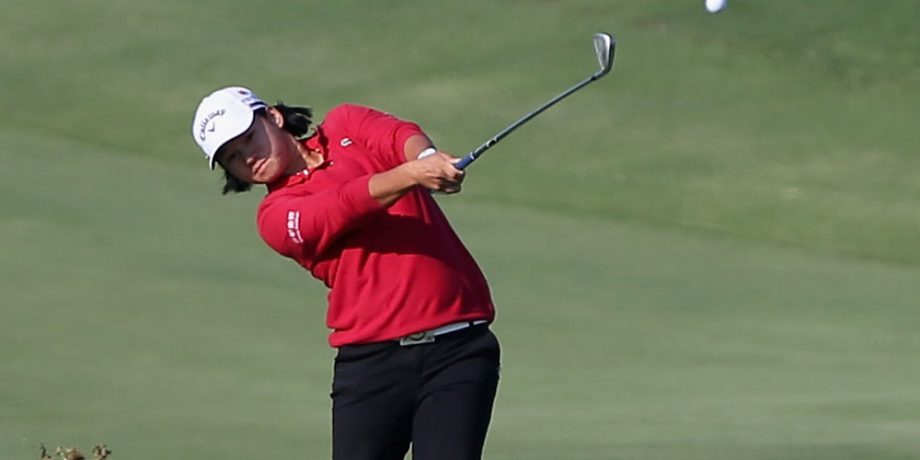 PRATTVILLE, Ala. – Yani Tseng closed with an eagle and a birdie for an 8-under 64 and a one-stroke lead Friday in the Yokohama Tire LPGA Classic.

Tseng hit a 6-iron to 4 feet to set up the eagle on the par-5 eighth hole just before play was delayed for about 90 minutes because of lightning and rain, then took the outright lead on the par-4 ninth with her sixth birdie of the day.

“I can’t wait to come out tomorrow,” Tseng said. “It will be a brand new day, but we’ll keep the same strategy and make as many birdies as I can.”

Ranked No. 1 in the world for 109 weeks, the 26-year-old Taiwanese player has slipped to 75th and is winless in 85 events since the 2012 Kia Classic. The 15-time tour winner tied for second in March in the LPGA Thailand for her only top-10 finish of the year.

“I’ve been working on my game forever, like every day,” Tseng said. “It’s just exciting. I really want to win a tournament for sure. We only have probably seven, eight tournaments left, but it’s never too late. Just very happy my game’s really coming back. … It doesn’t matter if it’s this week or next week or next year, just try to be patient as much as I can and stay positive.”

“You can see she’s confident,” Lewis said, “She’s firing at pins that are tucked and hidden. She hits it so far and hits the irons so high that they have a lot of spin, so she’s able to kind of attack pins that nobody else is. … It’s fun to see her playing the way she should be.”

Tseng reached 10-under 134 on the links-style Senator Course with her lowest round since a 63 in the 2013 LPGA Thailand.

“It just feels like this course suits my game,” Tseng said. “I feel very comfortable and confident out there. I’m just kind of getting back to enjoy playing golf again and it was so much fun to play with Stacy. She made a bunch of birdies and we kind of kept that momentum keep going. … Stacy’s amazing. I don’t know how to describe the feeling because we are good friends, but at the same time we’re competitors, too.”

Sydnee Michaels and Julieta Granada were still on the course at 7 under when play was suspended for the day because of more rain and darkness. Michaels had four holes left, and Granada two.

Lewis topped the group at 6 under after a 68. Second last year in Prattville, the Texan is coming off a playoff loss to Lydia Ko on Sunday in British Columbia in the Canadian Pacific Women’s Open.

“I still haven’t put it all together,” Lewis said. “A bit of a frustrating round. I had a good front nine, had it going, played 10 really good holes and then just kind of stalled the last eight.”

“I’ve been playing well. It’s really just a matter of getting some putts to fall,” Ernst said. “I hit it really well today. I had a few holes that where I kind of hit some loose shots, but kind of just took my bogey and kind of went on with it. And then I had probably three wedge shots that I hit up within a foot and I just went up and tapped them in. I think I hit two more where I had about 3 feet.”

Canadian teen Brooke Henderson was 3 under after a 70. The 17-year-old Henderson won her first LPGA Tour title two weeks ago in Portland, Oregon.

“I would have liked a little more today, but overall it was a pretty solid round and I gave myself quite a few opportunities,” Henderson said.