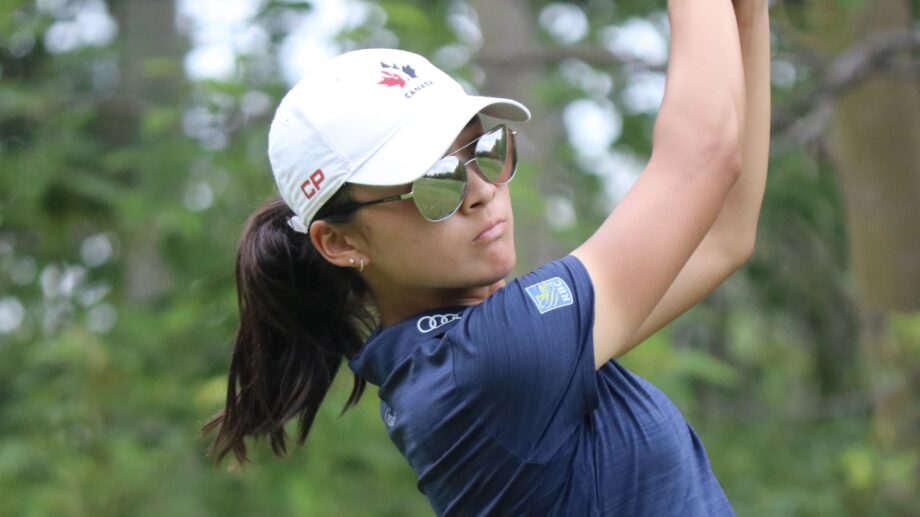 OTTAWA (July 28, 2022) – Automatic is one way to describe Yeji Kwon’s game in the third round of the Canadian Junior Girls Championship, presented by BDO. And even that might not do it justice.

The Port Coquitlam, B.C., native set the new tournament-low with a seven-under par 65 and broke free from the traffic jam atop the leaderboard. For the second day in a row, Kwon eagled the par-4 1st, holing out from the fairway. Incredibly, her approach shot came from the exact same yardage as her attempt in Wednesday’s second round.

“I had 76 yards again. It was a little into the wind, so I held the same club as yesterday and it did the same thing, it just spun back and went in,” said Kwon.

Even her reaction was the same; I was like, “Oh my gosh!”

With the quick start, Kwon positioned herself atop the leaderboard early in her round and didn’t let up from there. The 16-year-old hit a speedbump on hole No. 5, but was mistake-free after that, making five birdies including a tap-in on hole No. 17 to extend her lead to four strokes going into Friday’s final round.

“Tomorrow going in, I’m not going to think about it much,” said Kwon. “I feel like I’m going to think of it as a first round and play my best. It’s the last day, I just want to keep as calm as possible and focus and try to go lower tomorrow.”

If so, she better plan to save some room in her luggage for a trophy or two. Kwon also leads the Juvenile Girls division – a subdivision for girls 16 and under – by five strokes over 12-year-old, Lucy Lin.

Kwon’s 65 is the lowest round at a Canadian Junior Girls Championship since Euna Han’s opening round 64 in 2019. Han is also a native of Port Coquitlam, B.C.

Lin had back-to-back birdies on holes No. 4 & 5, then drained consecutive birdies again on holes No. 16 & 17 but made three bogeys in between. The Vancouver, B.C., native finished her round at one-under par and four-under for the tournament. She is alone in third place.

Erin Lee maintained her steady play at The Marshes Golf Club in Ottawa, Ont., this week, with another round in the red numbers. The Langley B.C., local rolled in six birdies in round three, en route to a one-under par 71. The Long Beach State University commit holds sole possession of second place and will play in the final pairing on Friday, alongside Kwon and Lin.

Alissa Xu and Lindsay McGrath rounded out the top-5, at three-under par for the tournament and still very much in contention for the national championship. Xu fired a three-under par 69 on moving day, while McGrath followed up yesterday’s 66 with a one-over par 73.

Final round tee times are scheduled to begin at 8:00 a.m., with the leaders teeing off at 9:50 a.m. An awards ceremony will follow the conclusion of play. Team Ontario will be awarded the Interprovincial Team Trophy and a national champion will be crowned for the individual competition.