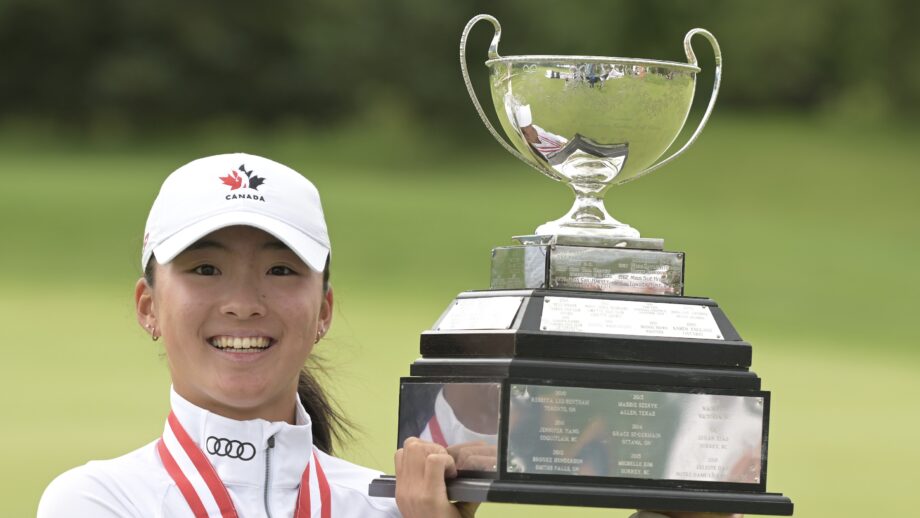 OTTAWA, Ont. – As she marveled at the names etched into the Brokenshire Trophy, Yeji Kwon gasped in awe when she realized she was in the same company as Brooke Henderson.

Kwon, 16, fired a two-under par 70 in Friday’s final round to capture the 2022 Canadian Junior Girls Championship, presented by BDO.

Words came few and far between from the Port Coquitlam, B.C., native following the victory. Instead, she let her play do the talking. With a four-stroke lead entering the day, Kwon stayed level-headed throughout, never allowing the gap to narrow down to less than three shots.

“I tried to block it (nerves) out as much as possible,” said Kwon. “I wasn’t playing the best today, but I tried my best out there to keep as calm as possible.”

Kwon, a member of Team Canada’s National Junior Squad, says her experience at the 2022 Toyota Junior Golf World Cup in late June helped her manage her emotions in the spotlight at The Marshes Golf Club.

“It’s a tournament with everyone from around the world. I learned so much, especially playing with other players and I think that really helped me stay more focused and play a lot better,” Kwon said.

After Lucy Lin cut the lead to four with a birdie on No. 11, Kwon stepped on the gas and cruised to the promise land, closing out in style with birdies on holes No. 13, 14 and 16. At that point, she knew she had done it.

“I saw the scoreboard and I was like, “Ok, let’s just try to make pars and get it done.”

Get it done, she did. Kwon tapped in on No. 18 to win by nine strokes and was showered in water by her teammates and competitors who stormed the green.

After an opening round 75, the British Columbian carded rounds of 67, 65 and 70 for a total score of 11-under par 277, en route to the national title. Kwon was also crowned champion of the Juvenile Girls division – a subdivision for girls 16 and younger.

Kwon will also be awarded a cheque of $1,200. To align with the modernized Rules of Amateur Status, players at the Canadian Junior Girls Championship, competed for a purse of $8,000 CAD. Along with Kwon, top-10 finishers and ties earned a piece of the prize money.

12-year-old Lucy Lin earned the runner-up honours in both the Junior Girls and Juvenile Girls divisions. The Vancouver, B.C. native, who is only getting started on the national stage, finished the tournament at two-under par for a total score of 286.

Erin Lee of Langley, B.C., completed the all-British Columbia podium sweep with a third-place finish. Lee, who was under par in each of the first three rounds, started hot with three birdies in her first four holes, but struggled to establish any pressure thereafter. She closed out her tournament with a four-over par 76.

In the Juvenile Girls divisions, the bronze medal was shared by three participants: Amy Seung Hyun Lee, Alissa Xu and Anna Huang. Xu’s medalist honours are her second in as many weeks. The Richmond Hill, Ont., native finished as the runner-up at last week’s Canadian Women’s Amateur Championship at Westmount Golf & Country Club.

Team Ontario – made up of Swetha Sathish, Sarah Gallagher, and Kelly Zhao – took home the Interprovincial Team Trophy. The Ontarians edged the British Columbians by five strokes in the team event, which concluded earlier in the week.

The 2023 Canadian Junior Girls Championship will be played at the Hampton Golf Club in Hampton, N.B.. Dates are to be announced in the coming months.