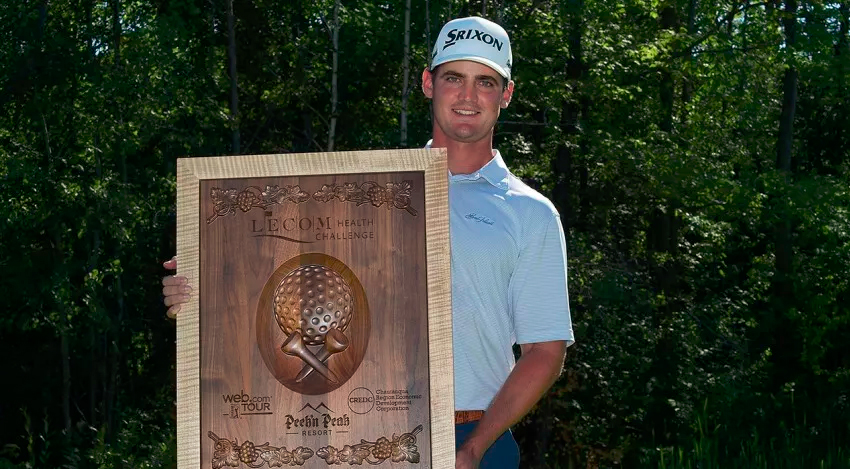 CLYMER, N.Y. – Monday qualifier Rick Lamb chipped in for birdie on the second hole of a four-man playoff Sunday to win the LECOM Health Challenge for his first Web.com Tour title.

Lamb closed with a 9-under 63 to match Dominic Bozzelli, Rhein Gibson and Cheng Tsung Pan at 19-under 269 on Peek’n Peak’s Upper Course.

“It hasn’t set in yet,” Lamb said. “Everything happened so quick. It’s just one of those days where everything went my way. It couldn’t have turned out any better.”

Lamb won on the par-5 18th after the four players each parred the hole to open the playoff.

The 25-year-old former Tennessee player earned $108,000 to enter the money list at 21st, with the top 25 at the end of the regular season earning PGA Tour cards. Lamb missed the cuts in his other two starts this season. He also shot a 63 on Monday on the Lower Course to get into the field.

“It’s completely life changing,” said Lamb, the first Monday qualifier to win since Sebastian Cappelen in the 2014 Air Capital Classic. “The money puts me in the top 25 on the money list and now sets me up for the final stretch to potentially get a card.”

Lamb was 6 under on the first six holes on the back nine, making an eagle on the par-4 12th and four birdies. He parred the final three holes of regulation, finishing about an hour before the final group.

“I was just trying to stay loose,” Lamb said. “I thought someone might come in at 20 under, but I tried to stay in it mentally just in case there was a playoff.”

Surrey, B.C., product Adam Svensson earned a share of 9th at 13-under, while fellow British Columbian Roger Sloan of Merritt was T14 at 12-under. Calgary’s Ryan Yip was T54 and Ottawa’s Brad Fritsch claimed 62nd.