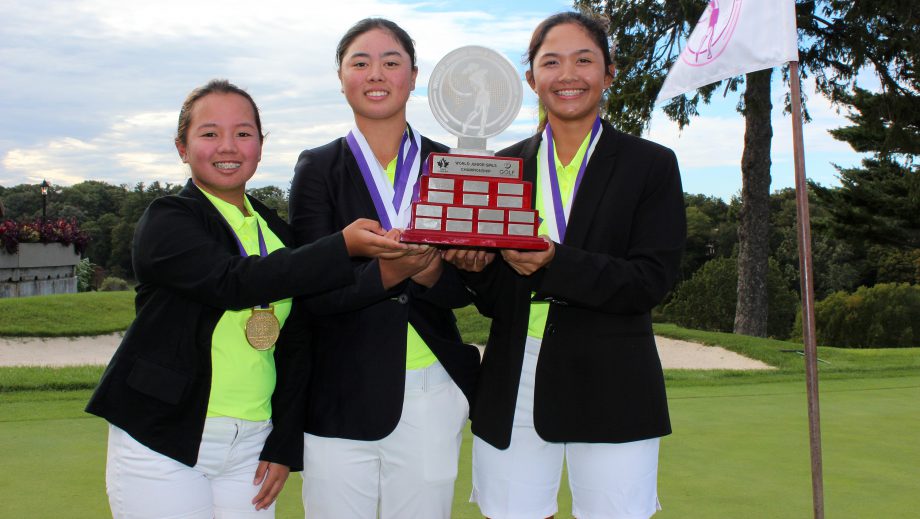 MISSISSAUGA, Ont. – The sun beamed through at Mississaugua Golf and Country Club to crown the Philippines as World Junior Girls team champions. Yuka Saso battled through a gusty day to claim individual medallist honours at the third edition of the annual event.

“I feel happy and honoured to win this trophy and this tournament,” said the 15-year-old Saso. “I feel happy [to be the gold medalist] because I was not expecting it, with this being [the Philippines’] first time in this tournament. Winning with this group is special because we have known each other since we were kids, so it makes me really happy.”

The native of Santa Rosa put forth another steady showing with a trio of birdies en route to a 2-under 70 final round. With a four-day total of 2-under 286, she completed the competition as the lone player to finish under-par. Alongside teammates Harmie Nicole Constantino of Taguig and Sofia Angela Legaspi from Quezon City, the trio combined to total 2-over 578 across the championship’s four rounds.

“This is the best feeling,” said Constantino, when asked about the team victory. “It is unexplainable to me, because no one expected it. We played our games and it turned out really well. We never had any doubts, we came here to win and we did.”

The significance of the tournament and the victory was not lost upon the 15-year-old Legaspi.

“It really means a lot to win this big event. It gives us a lot of experience and confidence. It also helps to get us college scholarships, so it is a big deal. The win could also inspire younger golfers in the Philippines to work hard and travel to events like this.”

Jennifer Chang of Cary, N.C., opened the day with a share of sixth alongside Caterina Don of San Pietro Val Lemina, Italy. A 2-under performance propelled the 17-year-old Chang into the runner-up position, while a 71 moved the 15-year-old Don into third.

“Despite some difficult weather, we have had an exciting and memorable week,” said Tournament Director Mary Beth McKenna. “From our Junior Girls Skills Clinic and Coaching Summit with the PGA of Canada to a fantastic Junior-Amateur event with the Mississauga community and the tournament itself – we have showcased our sport in a positive light. I know all of our players have learned and grown through this competition and have gained some invaluable international experience.”

Additional information on the 2016 World Junior Girls Championship can be found on the tournament’s official website at www.worldjuniorgirls.com.