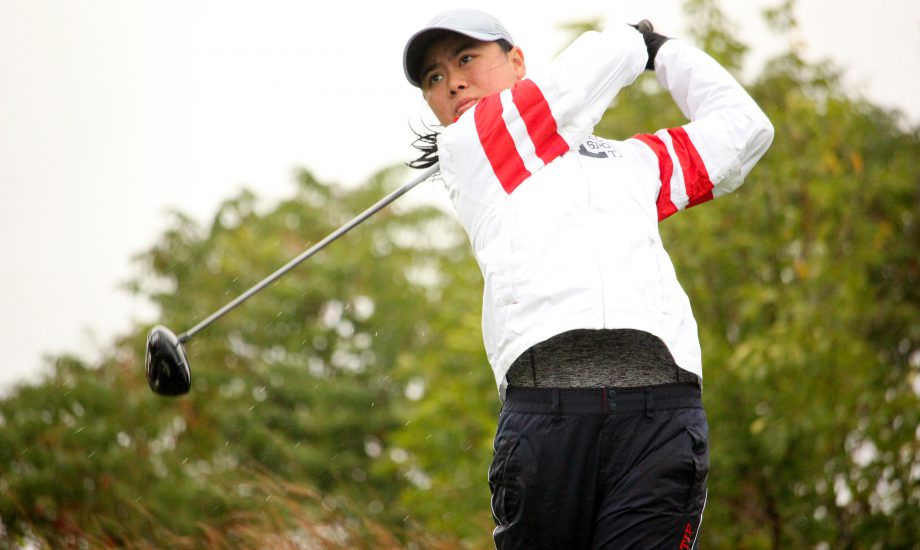 MISSISSAUGA, Ont. – Threatening skies cast over Mississaugua Golf and Country Club during the second day of competition came to pass during the third round. Howling winds and waves of rain wreaked havoc throughout a tough day at the World Junior Girls Championship. Yuka Saso of the Philippines conquered the difficult conditions to retake sole possession of the lead in the individual competition.

A steady 1-over 73 showing with a pair of birdies has Saso at even-par 216. The 15-year-old holds a three-stroke advantage over teammate Harmie Nicole Constantino of Taguig, Du Mohan of Fujian, China and Hee-Jung Lim of Paju, Korea.

“I am happy and honoured to have the lead,” said Saso, a native of Santa Rosa. “I wasn’t expecting it though.”

For a third consecutive day, Saso, Constantino and teammate Sofia Angela Legaspi of Quezon City, hold the lead in the team competition at a combined 1-over 433.

“It wasn’t anybody’s expectation for us to be on top at the moment,” said Constantino, mirroring her teammate’s sentiments. “It was a challenge being an underdog coming into the tournament, [and proving] that you are more than that.”

While team competitions can offer a different dynamic in golf tournaments, Constantino appreciates the opportunity to not only play with teammates, but also familiar friends.

“It feels good,” said the 15-year-old. “I have known Yuka since I was eight and we have been together since, so it feels good to be with her now.”

The trio representing Korea – the defending team champions – holds second at 9-over, while 2014 winners Team USA sit third at a combined 13-over.

Jennifer Chang of Cary, N.C., reiterated the importance of past experience when looking ahead to the final round.

“They have played this event before, so I definitely want to get some tips and learn from them and see what I can do to make the team better,” explained the 17-year-old, in reference to her teammates – 2014 individual champion Mika Liu of Beverly Hills, Calif., and Elizabeth Wang of San Marino, Calif., who played in 2015. “[A podium finish] is very important to us. To come out and represent the United States is big, so we want to make our country proud.”

Leading the Canadians in the field with shares of 15th at 11-over are Monet Chun of Richmond Hill, Ont., and Céleste Dao from Notre-Dame-de-L’Île-Perrot, Que.

The final round of tournament play will see players tee off at 8 a.m. Additional information from the competition is available here.