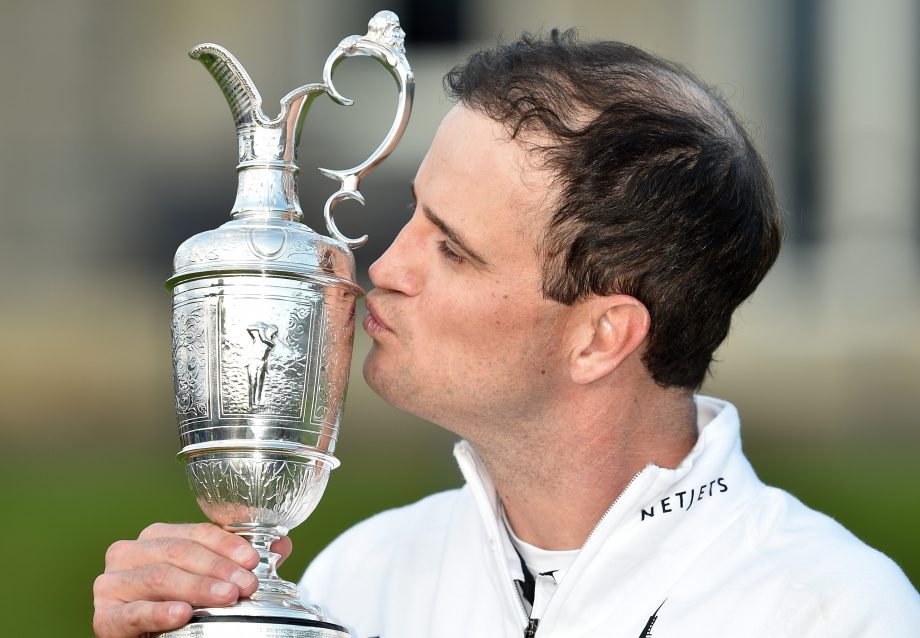 Spieth was right where he wanted to be in his spirited bid for the Grand Slam – tied for the lead with two holes to go in the British Open, right after making a 50-foot birdie putt that made it feel as though he were destined to win at St. Andrews for his third straight major.

And he was still there at the very end Monday, but only as a spectator.

The slam gone, Spieth graciously returned to the steps of the Royal & Ancient clubhouse to watch Johnson finish off a sterling performance of his own. Johnson rolled in a 30-foot birdie putt on the 18th hole that got him into a three-man playoff, and he outlasted Louis Oosthuizen and Marc Leishman to win the British Open.

Johnson described himself as a “normal guy” from Cedar Rapids, Iowa, when he won the Masters in 2007.

“I’m a normal guy from Cedar Rapids … with a green jacket that has something that most guys don’t get to drink out of right now,” Johnson said, smiling as he looked at golf’s oldest trophy with his name etched alongside most of the game’s greatest players.

Spieth was close to having his name on that jug. No one ever came closer to the third leg of the Grand Slam.

He fought back from taking four putts for a double bogey on No. 8 with back-to-back birdies. He rolled in that long birdie putt on the 16th for a share of the lead. After missing an 8-foot par putt on the tough 17th hole, Spieth needed a birdie on the closing hole to join the playoff.

“Up and down for a playoff,” was the last thing Spieth said to caddie Michael Greller from about 90 yards away. It was too far right and quite hard enough, and it rolled to the edge of the Valley of Sin short of the green. His birdie attempt up the slope stayed inches left of the cup, and he tapped in for a 69.

“We gave it a great effort,” Spieth said.

At least he was in elite company. Arnold Palmer, Jack Nicklaus and Tiger Woods – the three biggest names in golf over the last 50 years – were the only other players to capture the Masters and U.S. Open in a bid to sweep the four professional majors in the same year. All came up short in the British Open. Spieth was the only one who had a share of the lead so deep in the final round.

“I’m going to go home and reflect,” Spieth said. “It won’t hurt too bad. It’s not like I really lost it on the last hole, and 17 was brutally challenging. I just didn’t hit a great putt there, and I just picked the wrong wedge out of the bag on 18. I made a lot of the right decisions down the stretch and certainly closed plenty of tournaments out. And this just wasn’t one of those. It’s hard to do that every single time.

“I won’t beat myself up too bad, because I do understand that.”

It took a superlative effort from Johnson, who now has two majors among his 12 PGA Tour victories, an astounding record and a reminder that a good wedge game and a putter can still go a long way in this era of power.

Johnson was in tears when he was interviewed off the green.

“I’m grateful. I’m humbled. I’m honored,” Johnson said. “This is the birthplace of the game, and that jug means so much in sports.”

On a tense afternoon of shadows and showers on the Old Course, Johnson closed with a 6-under 66. He was the first in at 15-under 273.

Leishman, who considered giving up golf in April when his wife nearly died of a rare respiratory illness, fell out of the lead with a bogey on the 16th hole. He had a birdie putt for the win on the 18th that was wide left and gave him a 66. Oosthuizen made a 10-foot par putt on No. 17 to stay one shot behind, and he delivered a clutch moment of his own with a wedge to 5 feet for birdie and a 69 to join the playoff.

Graham DeLaet of Weyburn, Sask. finished as the low Canadian and ended the tournament at 1-under par, tied for 68th.

It was the first British Open playoff since Stewart Cink beat Tom Watson at Turnberry in 2009, and the first involving more than two players since 2002 at Muirfield, the year Woods failed in his bid for the third leg of the slam.

Johnson matched Oosthuizen’s birdie on the first hole and pulled ahead with another birdie on No. 2. Both made bogey on the 17th – Oosthuizen by missing a 5-foot putt to tie Johnson – and the South African had one last chance. Oosthuizen, who won the British Open when it last was at St. Andrews in 2010, had a 12-foot birdie putt to force sudden death. It touched the left side of the cup and kept going, and Johnson was introduced as the “champion golfer of the year.”

Spieth showed guts over the final two hours, and class when his bid was over. He stuck around to hug Johnson before he walked over to get his trophy.

Just two weeks ago, Spieth went to Iowa to take part in a charity event for Johnson before playing – and winning – the John Deere Classic. He was questioned for not coming over to St. Andrews to prepare for a rare occasion of attempting the Grand Slam. Spieth put that to rest with a performance that kept him around the lead all week.

It was the first British Open to end on Monday since 1988 because of a brief rain delay Friday morning and 10 1/2-hour wind delay on Saturday. But what a show. With 14 players separated by three shots, no one seized control the entire day. Eight players had at least a share of the lead at one point. Most of them fell away.

Spieth kept a golfing nation in suspense until the very end. Now, he goes to the PGA Championship with a tiny piece of history left to chase. Woods in 2000 and Ben Hogan in 1953 are the only other players to win three majors in a year, and no one has ever swept the three American majors.

At 21, he can only hope he gets another shot at the slam. Palmer, Nicklaus and Woods never did.