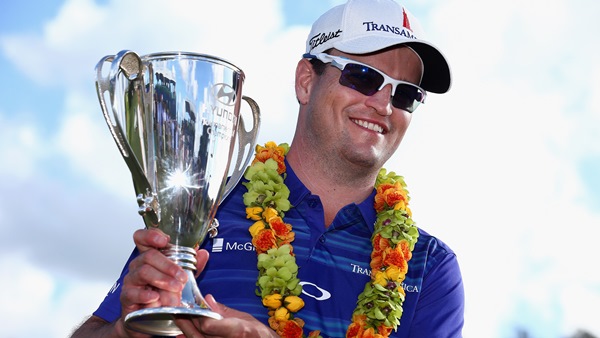 KAPALUA, Hawaii – Zach Johnson is taking his place among the big boys in golf with two of the shortest clubs in his bag.

On a Plantation Course at Kapalua that should be paradise for the game’s longest hitters, Johnson chipped in for his opening birdie and then hit four exquisite wedge shots on the back nine Monday to rally from two shots behind, close with a 7-under 66 and win the Tournament of Champions.

That was pivotal on the back nine, where five players had a chance to win. Johnson ran off four birdies in a five-hole stretch, all of them with a wedge in his hand, none of the shots particularly easy. He wound up with a one-shot win over Jordan Spieth, the perfect way to start a new year.

Especially after he ended the old one with a win.

Johnson didn’t need any heroics this time, not like last month in California in the World Challenge when he holed a shot from the drop zone _ with a wedge _ on the final hole and wound up beating Tiger Woods in a playoff. Kapalua was mainly about chipping and putting, and Johnson is among the best.

“Getting the ball in the fairway and giving my wedges a chance was crucial,” he said. “It’s about plotting my way, putting myself in a yardage spot that I know is going to give me an opportunity.”

Johnson, starting his 11th season on the PGA Tour, won for the 11th time in his career. Since his rookie season in 2004, only Woods, Phil Mickelson and Vijay Singh have won more on the PGA Tour. It also was Johnson’s third win in his last six starts, dating to the BMW Championship outside Chicago in September that qualified him for this winners-only tournament in Kapalua.

Spieth had a one-shot lead going into the back nine and thought only of making three birdies. He started way too late, losing three good birdie chances in the soft, middle portion of the back nine and then finishing with two birdies that only gave him a runner-up finish. He closed with a 70.

“I was very pleased with the finish, being able to birdie the last two holes and at least have somewhat of a chance on 18,” said Spieth, who had a 100-foot eagle putt just off the front of the green to force a playoff. “But ultimately, 14, 15, 16 really kind of hit me hard in the middle of the back nine.”

He made par on all of them, twice missing putts from about 6 feet.

He caught Spieth for the lead with a wedge from 83 yards to about 2 feet for birdie on No. 12. Johnson laid back with a 3-wood on the 14th hole and hit wedge to about 8 feet below the hole for birdie and the outright lead. Perhaps the most daunting shot came on the par-5 15th, up a steep slope to a green with a false front. The grain from the fairway and on the green was against him.

He followed that with a wedge to 5 feet and a tough, downhill putt that broke sharply toward the ocean that he made for his final birdie.

Webb Simpson, tied with Spieth and defending champion Dustin Johnson to start the final round, never caught up and closed with a 70. Simpson tied for third with Kevin Streelman, who had a 67.

Jason Dufner was four strokes back in fifth after a 69.

Dustin Johnson made three bogeys before making his first birdie. He shot 73 and tied for sixth.

Spieth was playing in the final group for the first time and looked poised as ever. With birdies on both par 5s on the front nine, he had the outright lead and looked as though he might become the youngest player with two PGA Tour wins since Ralph Guldahl in 1932. The signature shot was from a bunker short of the 14th green. He blasted out to 6 feet above the hole for a chance to match birdies with Zach Johnson, in the group ahead.

Except that he missed it.

And then he had to scramble for par on the 15th when what he thought was a perfect shot rolled down the slope 45 yards away. “Yes!” Spieth said when the ball was in flight. But when he saw it land softly and tumble down the hill, he followed that with, “You’ve got to be kidding me.”

It took two chips to reach the green, and only a 10-foot par putt kept him in the game.

Spieth missed an 8-foot birdie putt on the 16th, and the two birdies at the end at least gave him a good start to his new year. He earned $665,000.

Simpson, who received some encouraging news about the newborn of caddie Paul Tesori before starting his round, also found the wrong gear with consecutive bogeys early in the round and spent the rest of the day trying to catch up. He birdied three of his last five holes, but that wasn’t enough to keep pace with the leader.

Masters champion Adam Scott got within one shot of the lead with an eagle on the 15th hole, only for his wedge to hit the flag on the 16th. He had to settle for par, and he closed with a bogey to finish in the tie for sixth.