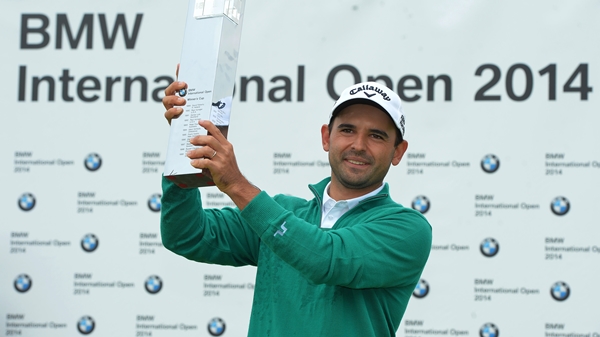 COLOGNE, Germany – Fabrizio Zanotti won a four-way playoff to take the BMW International Open title Sunday and become the first player from Paraguay to win on the European Tour.

Zanotti won when No. 2-ranked Henrik Stenson conceded after failing to make a bunker shot on the fifth playoff hole. Gregory Havret of France and Rafa Cabrera-Bello of Spain went out on the second and fourth holes, respectively.

The 31-year-old Zanotti earlier made seven birdies for a 7-under 65 final round to finish on 19-under 269 on the Gut Laerchenhof course. It was his second successive 65 after rounds of 72 and then 67.

“I was just trying to enjoy the moment, shot by shot,” Zanotti said. “Then when I got to the playoff, it was very up and down for the first one. Then in the second I got a good birdie after Henrik. Then I started thinking, maybe today is my day.”

Stenson came close to snatching victory before the playoff but settled for par on the last hole. The Swede made up for two bogeys with five birdies and an eagle. He came agonizingly close to ending the playoff at the first hole.

Cabrera-Bello earned his playoff place with a birdie-eagle-birdie finish. He almost made an eagle to end the playoff at the third hole as rain began falling.

Overnight leader Pablo Larrazabal, who held a three-stroke advantage, could only finish joint-eighth on 17 under after two bogeys – the Spaniard’s first missed shots of the week – and two birdies gave him a final round of 72.

Thongchai Jaidee of Thailand, Simon Dyson of England and Welshman Jamie Donaldson finished tied for fifth on 18 under, ahead of former champions Larrazabal (2011), Danny Willett (2012), Thomas Bjorn (2000 and 2002) as well as Argentina’s Emiliano Grillo.

James Heath scored a hole in one on the 16th to win a sports car. The Englishman finished 11-under 277 overall.

“I still can’t quite believe it,” the 21-year-old said. “It more than triples the highest check I’ve ever made.”