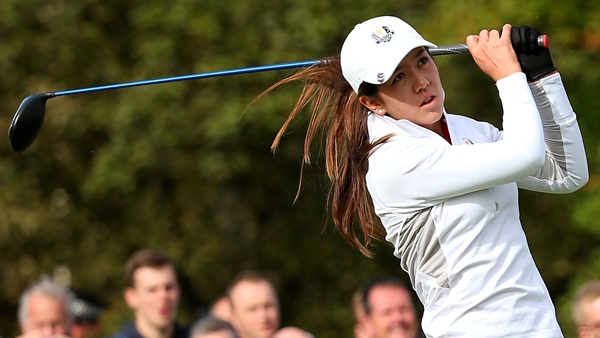 MESA, Ariz. – Hannah O’Sullivan became the youngest winner in Symetra Tour history Sunday, shooting a 3-under 69 for a four-stroke victory in the season-opening Gateway Classic.

The 16-year-old O’Sullivan, a junior at nearby Chandler Hamilton, broke the age record of 17 set by LPGA Tour star Cristie Kerr in the 1995 Ironwood Futures Classic in Gainesville, Florida.

O’Sullivan is the first amateur winner since Kellee Booth in the 1999 Pacific Bell Futures Classic in Riverside, California.

O’Sullivan finished at 15-under 201 at Longbow. She opened with rounds of 69 and 65 to take a four-stroke lead into the final day.

O’Sullivan has verbally committed to play at the University of Southern California. She was a semifinalist last year in the U.S. Women’s Amateur and played on the winning U.S. team in the Junior Ryder Cup in Scotland. She won Arizona high school titles in 2012 and 2013.

Haley Italia was second. She birdied two of the last three holes for a 69.

Maude-Aimée LeBlanc led the way for the Canadian contingent, carding a 2-under 70 to tie for 4th. Samantha Richdale finished T14 following a 3-under final round. Brittany Henderson’s 2-under 214 was good for a share of 25th place while Augusta James completed her pro debut T34.