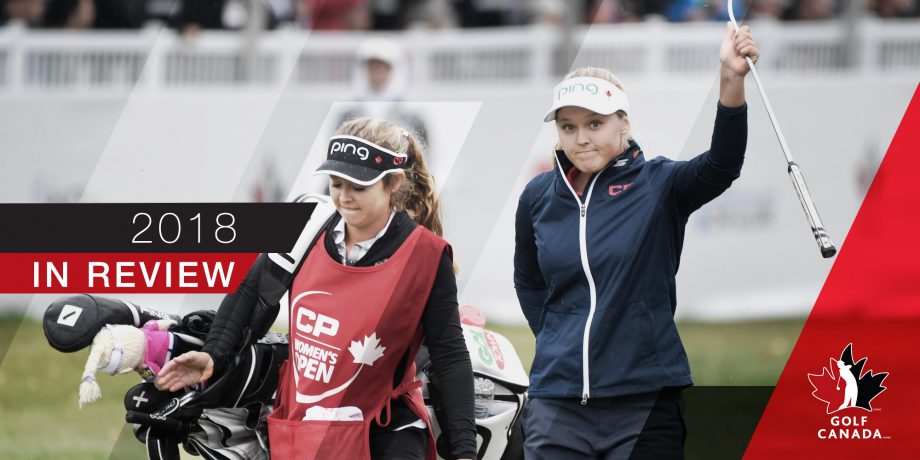 What a year it was for Canadian golf.

Our pros won literally around the world and on just about every tour imaginable.

Our amateurs of all ages made Canada proud at home and abroad.

And, off the course, there were significant moments that are well worth memorializing as 2019 looms on the horizon.

(If we’ve unintentionally overlooked any—there were so many, after all!—please let us know at communications@golfcanada.ca)

Canadian professionals on the world stage

Brooke Henderson repeats as Canadian Female Athlete of the Year for both Canadian Press and Postmedia.

Jaclyn Lee opts to forego her final semester at Ohio State University to turn professional.  The 21-year-old from Calgary, a six-year member of the Team Canada program, earned her LPGA Tour card in November after finishing sixth at the Q-Series LPGA tournament.

Brian McDonald, the director of golf and general manager of Fairview Mountain in Oliver, B.C., fires five birdies in the final round to claim the PGA Head Professional Championship of Canada Presented by Titleist & FootJoy.

Three of four Canadians improve their Web.com Tour status at the Tour’s Qualifying event. They were led by Brad Fritsch of Manotick, Ont., who posted a 10-under 62 in the final round. His T-8 finish earned him 12 guaranteed starts in 2019. Michael Giglic of Burlington, Ont., and Toronto’s Albin Choi ended up inside the top 40, getting eight starts. Vancouver’s Seann Harlingten maintained his conditional status.

Team Canada, Adam Hadwin and Nick Taylor, tie for fourth at the World Cup of Golf in Australia, the best finish by Canada since Dave Barr and Dan Halldorson won the event in 1985.

After setting a course record of 61 in the second round, Calgary’s Stephen Ames ends up T-5 at the PGA Champions Tour finale, the Charles Schwab Cup. It ended a great year for the 54-year-old Ames, who finished with four top-10s for the season.

Corey Conners of Listowel, Ont., is out-duelled by PGA TOUR freshman phenom Cameron Champ in the final round of the Sanderson Farms Championship to finish runner-up. Champ rode a hot putter to birdie five of the last six holes to deny Conners the title.

Ben Silverman of Thornhill, Ont., Adam Svensson of Surrey, B.C., and Roger Sloan of Merritt, B.C., secure their PGA TOUR cards for 2019 due to their performance on the Web.com Tour.

Mr. 59! Drew Nesbitt of Toronto has four eagles, including a hole in one, five birdies, eight pars and a bogey to post the first 59 in PGA TOUR Latinoamerica history in the second round of the Brazil Open.

Marc-Etienne Bussieres of Longchamp, Que., defends his title at the PGA Assistants Championship of Canada Presented by Callaway Golf.

Brooke Henderson becomes the first woman in 45 years to win the CP Women’s Open. At 20, the Team Canada graduate claimed her seventh LPGA Tour victory, including a major, but none was greater than this at Regina’s Wascana Country Club. Jocelyne Bourassa won the event in 1973.

Graham DeLaet of Weyburn, Sask., was elected to the Boise State Hall of Fame. Along with his success at the collegiate level and on the PGA TOUR, DeLaet competed for Canada at the Olympics, the Presidents Cup and the World Cup.

Joey Savoie of La Prairie, Que. and Maddie Szeryk a London, Ont., resident, are recognized as Canada’s top male and female amateur golfers for 2018 based on the final standings of Golf Canada’s National Orders of Merit. It was Szeryk’s fourth consecutive year topping the Women’s Amateur Order of Merit. On the junior side, Céleste Dao of Notre-Dame-de-l’Île-Perrot, Que. and Matthew Anderson of Mississauga, Ont., took home top honours on the Future Links, driven by Acura National Junior Order Merit.

Golf Canada announced the 17 athletes who will represent Team Canada as part of the 2019 National Amateur and Junior Squads.

Celeste Dao, 17, of Notre-Dame-de-l’Île-Perrot, Que. and William Duquette, 17, of Laval, Que. represented Team Canada in golf at the Youth Olympic Games in Buenos Ares, Argentina from October 6-18, 2018. Dao finished T13 and Duquette 28th in their respective divisions. The duo also combined to finish 22nd in the mixed team competition.

Christopher Vandette of Beaconsfield, Que., becomes only the 10th player since the joint event was established in 1948 to win both the Canadian Junior Boys and Juvenile Boys Championships.

Wesley Hoydalo of Selkirk, Sask., and Sydney Scraba of Calgary win their respective divisions at the Future Links, driven by Acura Prairie Championship at Portage GC in Manitoba.

The University of British Columbia Thunderbirds win their third straight women’s title in the Canadian University/College Championship. The host University of the Fraser Valley Cascades win the men’s title.

Team Canada member Celeste Dao comes from six back to win the Mexican Junior Girls Championship in a three-hole playoff.

Calgary’s Jaclyn Lee, a junior at Ohio State, ties a 54-hole scoring record en route to winning the Big 10 Championship. It was her third NCAA title of the year.

Jaclyn Lee of Calgary breaks an Ohio State school record with a 64 in the final round to win her second NCAA title, the Westbrook Spring Invite in Arizona.

Milestones Off The Course

The RBC Canadian Open was honoured at the PGA TOUR’s Tournament Meetings for its “Best in Class Element”, thanks to the success of its fan experience, The Rink. For the past two years, the par-3 seventh hole at Glen Abbey Golf Club was transformed into a rendition of a hockey rink, complete with boards lining the hole, upgraded bleachers and viewing decks, with marshals dressed as referees. A net, puck and hockey sticks were available for the pros to test their hockey skills as part of Wednesday’s Championship Pro-Am.

Golf Fore the Cure Presented by Subaru announced it raised more than $425,000 for breast cancer research in 2018, thanks to the efforts of more than 13,000 participants at 175 events across Canada. Since the program’s inception in 2003, upwards of 120,000 women have raised more than $6.7 million with all proceeds donated to the Canadian Cancer Society and the Quebec Breast Cancer Foundation.

Golf Ontario and the Northern Golf Association announce a partnership to grow the game in that province. As a result, all NGA members will also be Golf Ontario members, both associations will continue to invest in initiatives such as Golf in Schools, and there will be a stronger collaboration in areas such as course rating, handicapping and competitions.

The sole Canadian stop on the PGA TOUR Champions Tour, Calgary’s Shaw Charity Classic, announces it had donated a record-breaking $12.4-million donation to be shared among 182 youth-based charities in Alberta. That brought the six-year total to more than $34 million since the event’s inception, impacting more than 500,000 youth in the areas of sports, arts, health, development and counseling.

Brittany Henderson of Smiths Falls, Ont., is inducted into her alma mater’s Athletics Hall of Fame at Coastal Carolina University. Prior to putting her playing career aside to caddie for sister Brooke, Brittany was a member of Team Canada and an outstanding collegiate golfer, leading her school to two Big South Championships.

The R&A announces that the 2019 RBC Canadian Open will be one of 16 events that will make up the Open Qualifying Series.

Team Canada Junior Women’s Coach Matt Wilson of Newmarket, Ont., is named Coach of the Year for the PGA of Canada Ontario Zone.

Former LPGA Tour player Christa Teno of Tecumseh, Ont., is named Coach of the Year by the LPGA Teaching and Club Professional association. She has been the head women’s coach at Florida’s Seminole State University since 2007 and coached the team to a national championship in 2015. Tina Tombs, a native of Montreal who played on the LPGA Tour and now resides in Arizona, is named Teacher of the Year.

Brooke Henderson of Smiths Falls, Ont., is named female summer athlete of the year at the Canadian Sports Awards. She would later be voted a runner-up finalist for the 2018 Lou Marsh Award.

The Canadian Golf Superintendents Association names Dean Baker of Ontario’s Burlington Golf and Country Club as superintendent of the year.

Canadian Pacific announces it has extended its title sponsorship of the CP Women’s Open for five years, from 2019 through 2023. Golf Canada and CP also announced that the 2019 CP Women’s Open would be hosted at Magna Golf Club in Aurora, Ont.

Longtime golf journalist Mario Brisebois is named for induction into the Quebec Golf Hall of Fame. Congratulations as well to the many deserving individuals across Canada inducted into their respective Provincial Golf Hall of Fame in 2018.

Revered Canadian pro Jerry Anderson passes away suddenly at the age of 62.

A totally revised Rules of Golf is revealed for review, to be implemented on January 1, 2019.

Golf Canada launches the centralized program (February through May) for the National Junior Squad at its National Training Centre at Bear Mountain Resort in Victoria, B.C.

The proposed new World Handicap System is announced, designed to provide all golfers with a consistent measure of playing ability globally. Golf Canada will adopt all features of the new system.

Golf Canada announce a partnership with the Good Beer Folks at Steam Whistle, Canada’s Premium Pilsner, to become the Official Beer of Golf Canada, the RBC Canadian Open and the CP Women’s Open.

Tom Zariski of Drumheller, Alta., is named Golf Canada’s 2017 Volunteer of the Year.