A brief run by Tiger, and now everyone chasing Matsuyama 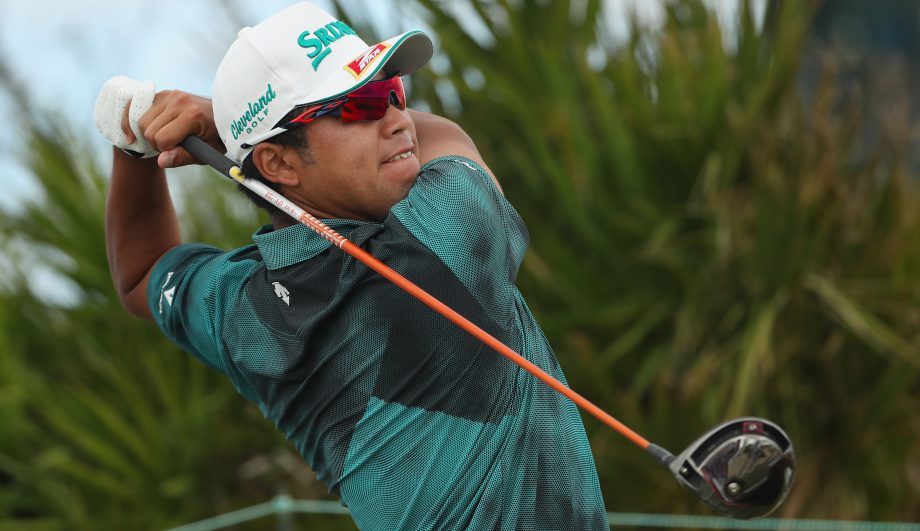 NASSAU, Bahamas – Tiger Woods started with brief run at the lead. Hideki Matsuyama ended Saturday on his way to another victory.

Matsuyama, a winner in three of his last four tournaments, holed out for eagle on the front nine and kept his mistakes to a minimum for a 7-under 65 to build a seven-shot lead in the Hero World Challenge.

Woods was even farther back – 11 shots – though the opening hour was filled with big excitement and raised expectations. Woods opened with three straight birdies, and then holed out a 40-yard bunker shot on the par-3 fifth hole to get within two shots as Matsuyama was getting started.

But it didn’t last.

After an 18-foot birdie putt on the 11th hole to reach 11 under, Woods started missing fairways and dropping shots. And he ended the third round with another tee shot into the water on the 18th hole for a double bogey. He had to settle for a 70 and was in 10th place among 17 players.

Even so, Woods has made 19 birdies in three rounds of his first tournament in 15 months. Asked what he would have thought at the start of the week to hear that he was 8-under par through three rounds, Woods replied, “I’ve had said I’d be pretty far behind. And I’m right.”

Matsuyama was at 19-under 197, matching the 54-hole score by Bubba Watson last year at Albany. A year ago, Watson had a two-shot lead. No one is close to Matsuyama, the hottest player in golf over the last two months.

“I knew somebody was going to go low, but I thought it was going to be probably three, four guys that would post this kind of a score,” Woods said. “But Hideki is just playing unbelievable golf.”

Johnson tried to stay with him, but had a hard time keeping it out of the sandy areas off the tee. Matsuyama was two shots ahead when he laid up on the short seventh hole, which played downwind, and then one-hopped his wedge into the cup for an eagle. Just like that, the lead was up to four. And when Johnson kept making mistake, ending with a double bogey on the 18th, the margin only got wider.

Matsuyama took notice early when he saw Woods made a brief run up the leaderboard.

“Only Tiger could take a year-and-a-half off and put up the numbers he’s putting up this week,” Matsuyama said. “I don’t care how many strokes I’m leading over him, I still worry about him, fear him.”

That was more respect than reality. The winners of golf’s two oldest major championships this year don’t sound like they have much of a chance from seven back.

“Anything’s possible, but I’m going to have to shoot a really special round,” Johnson said.

“That’s exactly what he did at HSBC Champions, and it was not much to do at that time. And possibly, that could be the same tomorrow,” Stenson said.

Woods still captivated the small island crowd, at least with his start. He three-putted for bogey to slow his momentum, and he missed a pair of 6-footers for par early on the back nine. Still, most players said his score was above their expectations given the injuries he had and the rust he accumulated.

Woods said he had no expectations at all, though he was surprised about his start. Typically after a long layoff, Woods said he struggles to get going. Now it’s about finishing a round.

“That’s the most concerning part of the game, is getting off to I guess halfway decent starts,” Woods said. “But I’ve been into the round early, and I’ve been able to build a significant amount of positive shots and go under par early. And unfortunately, I haven’t been able to keep it going, except for yesterday. I didn’t hit the ball that poorly today, but hit bad putts in the middle part of the round.”