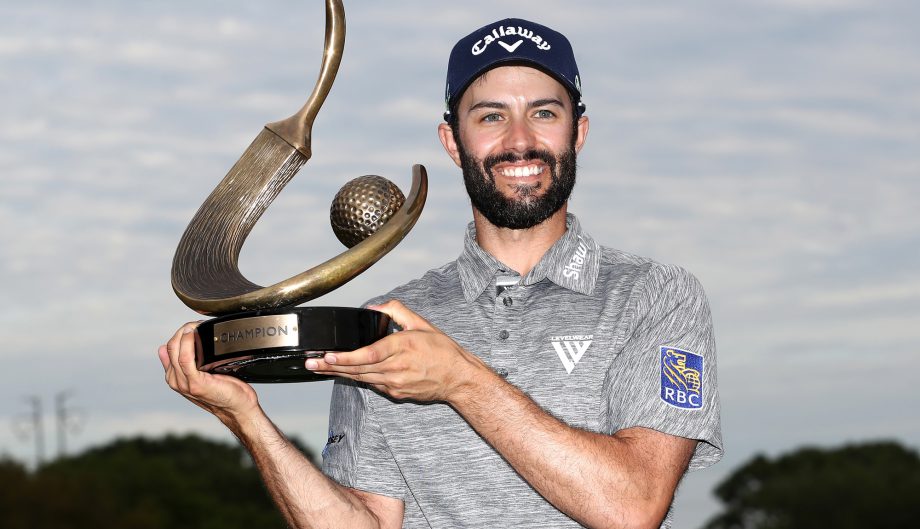 PALM HARBOR, Fla. – Canada’s Adam Hadwin is skipping his first World Golf Championship and asking for a refund for his honeymoon to Tahiti.

He couldn’t be happier.

Seven weeks after he shot a 59, and two weeks before his wedding, Hadwin added another eventful chapter to his amazing year.

He threw away a two-shot lead with three holes to play by hitting a tee shot into the water, kept his wits and then closed with two strong pars for an even-par 71 to win the Valspar Championship by one shot over Patrick Cantlay for his first PGA Tour title Sunday.

Adam Hadwin wins the @ValsparChamp for his first victory on TOUR. pic.twitter.com/9bVybd130S

“You’re never quite sure when you’re going to get the job done,” Hadwin said. “I just went there today and stuck to what I do best, just hit some quality golf shots and really made the game super easy outside of hole No. 16. I feel a little fortunate after that hole to be sitting here, but I’ll certainly take it, and I can’t wait for everything that comes with this win.”

The victory moves him to No. 51 in the world and makes him eligible for the Dell Match Play – except that he’s getting married that week.

It also sends the 29-year-old Abbotsford, B.C., product to the Masters, meaning he will have to postpone that honeymoon to French Polynesia. Instead, he’ll be preparing for Augusta National, the place he called the “greenest place on earth.”

Even with a four-shot lead going into the final round, all he wanted was a chance over the final few holes.

The trick Sunday was reminding himself he was right where he wanted to be.

From another time zone. #QuickHits pic.twitter.com/dqy26lsrxJ

But it all changed on the 16th, the start of a tough three-hole finish at the Copperhead Course. His 3-wood peeled off to the right and never had a chance, and Hadwin walked off the hole with a double bogey and a tie for the lead

The former No. 1 amateur in the world, playing for only the second time after missing two years with a back injury, leaked his approach into a bunker. Hadwin’s approach went just over the back against the collar of the fringe, leaving him a belly wedge down the grain that came off perfectly and settled 2 feet below the cup.

Cantlay’s bunker shot was well short, and he missed the 15-foot par putt to force a playoff.

The consolation prize for Cantlay was a runner-up finish that paid $680,400, more than enough for him to secure full status for the rest of the year.

“It doesn’t really feel like much consolation at the moment,” Cantlay said. “I didn’t finish the deal.”

Even in loss, it was a bright return for the UCLA star. Cantlay wondered if his back would ever allow him to regain his form. While still in college, he shot 60 at the Travelers Championship in 2011, was low amateur in the U.S. Open and didn’t finish out of the top 25 in his four PGA Tour starts that summer.

A stress fracture in his back kept him out of golf for two years. Then, he endured a far greater burden a year ago February when his best friend and caddie, Chris Roth, was struck and killed by a car as they were walking to a restaurant for dinner in California.

He looked like he was never gone. Trailing by four shots with 10 holes to play, he ran off five birdies in a six-hole stretch that put enormous pressure on Hadwin.

“I was just trying to catch him,” Cantlay said. “And I caught him, and gave it to him in the end.”

Hadwin is the third Canadian to qualify for the Masters, joining RSM Classic winner Mackenzie Hughes and 2003 champion Mike Weir. He finished at 14-under 270.

Congratulations to Abbotsford’s @ahadwingolf on winning the PGA’s #ValsparChampionship today, and all the best on your upcoming wedding!

Tony Finau closed with a 64 to finish alone in fifth, though that likely will narrowly keep him out of the Dell Match Play in two weeks. Finau only moves to No. 70 in the world, and as many as five players are likely to withdraw.

Jason Dufner birdied his last two holes for a 67 to tie for 11th and qualify for Match Play.

Hadwin’s fiancee, Jessica Kippenberger, made the wedding date for March 24 because that’s when the venue was available. Hadwin checked the schedule and figured it worked out beautifully.

The honeymoon deposit was only for the hotel. He booked refundable airline tickets with the Masters in mind.