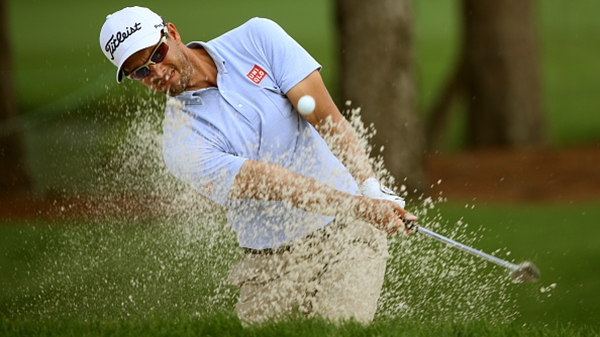 PALM HARBOR, Fla. – Adam Scott packed up his bags and headed to the next tournament, a common sight except for one tiny detail.

This was only Friday.

Scott missed four putts inside 5 feet in the second round and shot a 4-over 75 to miss the cut at the Valspar Championship, ending the longest active streak on the PGA Tour. Scott had gone 45 straight PGA Tour events – and 57 events worldwide – without missing a cut.

“It had to happen eventually,” he said.

Even so, Scott raised his cap and scratched his head when asked the last time he had a weekend off at a golf tournament. He finally remembered the Byron Nelson Championship in May 2012.

Scott used a conventional putter for the second straight week after having used a long putter anchored to his chest the previous four years, including his Masters victory. He tied for fourth in his 2015 debut – and his debut with a short putter – last week at Doral.

“It was pretty scrappy out there,” Scott said. “Some loose shots, and some loose lag putts and some loose short putts. There’s not many courses we play you can get away with that. I’ve got to tighten it up a little bit. Overall, I feel pretty good. There’s a lot of good stuff in there.”

Scott said no one should be surprised if he used the long putter at Augusta National, adding with a smile that “it’s nice to have options.” But he wasn’t alarmed that he ranked No. 141 out of 144 players at Innisbrook in the key putting statistic.

“I feel fine with it,” he said. “It can happen. You can miss some short ones. Obviously, it’s not what you want and there’s no excuse. But there’s a couple of things I’d like to make an adjustment with on different greens, different green speeds.”

He used the long putter in practice this week, and said it helps as a training aid. “I see myself practicing with it forever,” he said.

Scott couldn’t help but smile when he suggested one problem he faced this week at Innisbrook. He was a little tired, even though he had a three-month break. His wife gave birth to their first child, and he is in the middle of six weeks away from home.

“If you can blame fatigue after a layoff, in fairness, I feel like I’ve crammed more into my last month than I have in a year,” he said. “With the birth, spending nine days at home with a newborn, coming over and practicing and play in an event, all in three weeks … I feel like a lot has happened. I’ve been certainly sleeping soundly this week. I think it’s just getting back adjusted to everything.”

Scott came up just 97 starts short of matching the consecutive cut record held by Tiger Woods from 1998 to 2005.

“Just missed it,” he said with a heavy dose of sarcasm.

He missed the cut, but the Australian didn’t miss a single autograph request for the next 15 minutes as he worked his way along a rail fence, signing Masters flags, golf balls and taking a half-dozen selfies with fans.

The active cut streak on tour now belongs to Steve Stricker at 35. Stricker has not played since the PGA Championship last August.