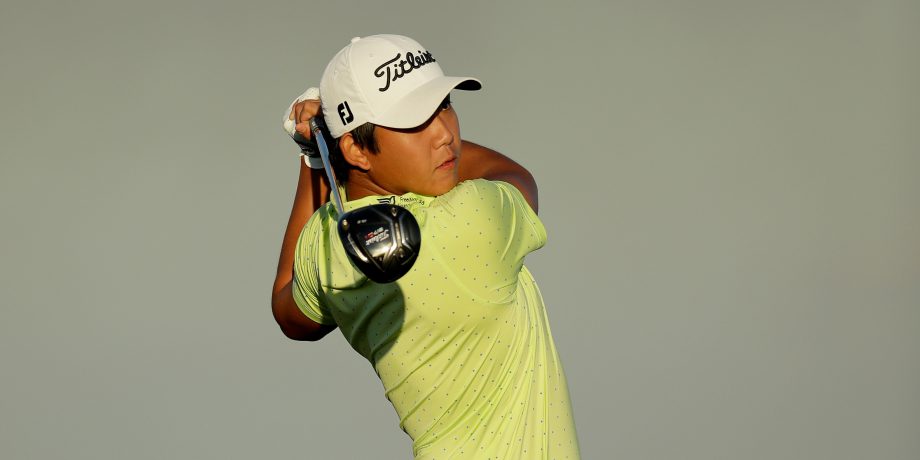 GREAT ABACO, BAHAMAS - JANUARY 24: Albin Choi hits his tee shot on the 18th hole during the third round of The Bahamas Great Abaco Classic at the Abaco Club on January 24, 2017 in Great Abaco, Bahamas. (Photo by Andy Lyons/Getty Images)
Korn Ferry Tour with files from Golf Canada

Being in the final grouping of the final round on the Web.com Tour can be a daunting task. Every shot seems magnified, and the crowds make it feel like you have eyes on your every step. It can seem even more nerve wracking when it’s your first year on Tour – and your first time in contention. But the momentum wasn’t too big for University of Georgia alum Joey Garber. After opening play at the Rex Hospital Open with rounds of 66-65-69, Garber entered Sunday T2, three strokes back of the lead. Playing in the final threesome for the first time in his career, he continued his stellar play, posting a final-round 5-under 66 to end the week at 18-under 266, enough to top fellow rookie Hank Lebioda and 2018 Panama Championship winner Scott Langley by one stroke to earn his first professional win.

“To get a win on this Tour,” Garber reflected after his victory, “is definitely one of the hardest things I’ve ever done in my life and to come through today, this early in the season, in my first year out here, and in my first time in the final group, it means everything to me. It just proves what I believed in myself. I’m very excited with my game and where we’re headed for the rest of the year.”

Garber, who turned professional in 2014, had a stellar college career. A Petoskey, Michigan, native, he spent his first year playing for the University of Michigan, leading them to an NCAA Central Regional win and carding the third-best freshman season in school history before transferring to the University of Georgia. While in Athens, Garber continued to excel. He was named first-team Golfweek All-American (becoming just the fourth Bulldog to do so) and spent time as the No. 1-ranked college golfer.

The professional world proved to be a test for Garber, who struggled to earn permanent status on any tour. He spent 2015 on the Mackenzie Tour – PGA TOUR Canada, but six missed cuts in nine starts forced him to take the route of Monday qualifying on the PGA TOUR and Web.com Tour. The former “Mr. Michigan Golf” winner finally broke through at the 2017 Web.com Tour Qualifying Tournament, where he finished T30 to earn guaranteed starts in the 2018 Web.com Tour Season.

“It means everything [to be here after Q-School in December],” he said. “I’d been close in the Web.com Tour Qualifying Tournament a few times and ended up just a couple of shots short twice, so to get through this year was a huge jump for me. I did not want to be doing Monday qualifiers again this year. I’ve done enough of those, so hopefully I’m headed in the right direction. This is huge for me and I’m pumped.”

Garber has made the most of his first season on Tour, entering the week in Raleigh with four top-25s in 12 starts already under his belt, including a pair of T8 finishes at the Country Club de Bogotá Championship and the Chitimacha Louisiana Open presented by NACHER.

The field in Raleigh did not make Garber’s win easy for him, with the leaderboard becoming more and more stacked as the day went on. As the leaders neared the closing stretch, 13 players sat within three of Garber, who had brought a lead into his back nine after turning with a 4-under 32. The St. Simons Island, Georgia, resident had no clue what was going on around him, however, instead choosing to focus solely on his game.

“I never looked at one,” he remarked when asked how leaderboard-watching affected him. “My caddie I’m sure was looking at one, so he knew where we stood. In the fairway of No. 18, I asked him what we needed, and he told me we needed a par so I tried to put it in the middle of the green. It came a little left but ended up in a perfect spot. It was bunched up so I’m glad I didn’t see any leaderboards because I just played my own game, tried to make birdies, and be smart.”

Garber’s maiden victory comes with a $117,000 paycheck, enough to move him from 50th to No. 6 on the Regular Season money list and push him one step closer to earning his first PGA TOUR card.

His title in the Tarheel State coincided with another major win for Garber – the announcement of a 2019 PGA TOUR event in his home state of Michigan.

“Hopefully it’s just divine intervention,” he laughed when asked about the timing. “I’m very fortunate to be from the state of Michigan. It’s a great state for golf. While the season is short, I think it’s the best golf courses in the country, so I’m glad it’s back on the national showcase. I hope I’m there. That would be really special to me.”
With the way his season is going, there’s a good chance this time next year Garber could be competing on TOUR in his home state.