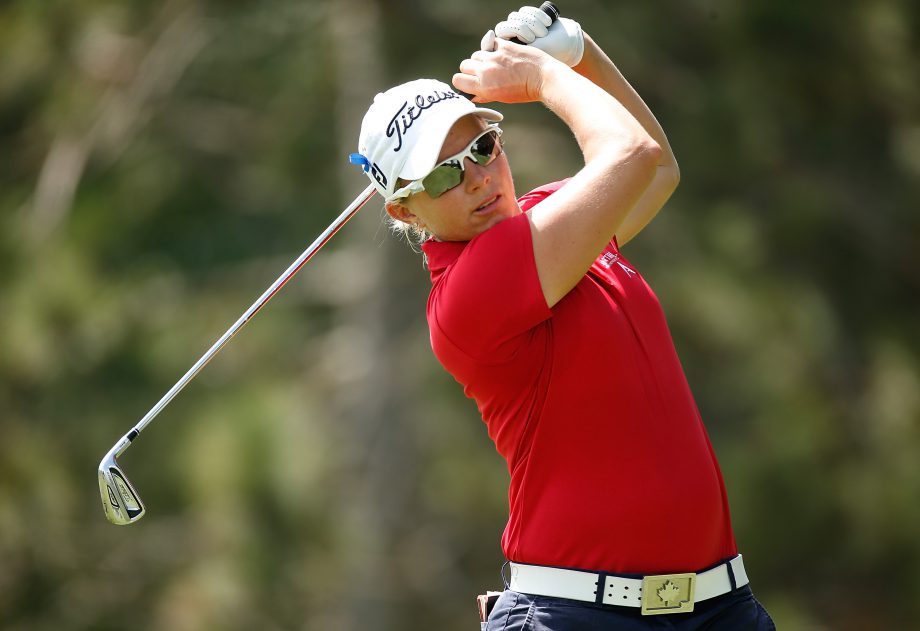 SYLVANIA, Ohio — Ha Na Jang parred the last five holes Saturday for a 2-under 69, leaving her a stroke ahead with one round left in the LPGA Tour’s rain-plagued Marathon Classic.

The South Korean player had an 11-under 202 total at Highland Meadows. Fighting back pain, she opened with rounds of 66 and 67 and has only two bogeys over the first 54 holes.

Play was delayed for 1 hour, 59 minutes in the afternoon. Delays Friday forced 54 players to complete the second round Saturday morning.

Seeking her first LPGA Tour victory, Jang said her target is to finish at 15 under.

“I don’t want to think about any players. Just myself, confidence, concentration and play,” Jang said.

South Korea’s Q Baek was second. She birdied the final hole for a 68.

“Overall I missed a lot of putts today,” Baek said. “But I was just happy with the way I played.”

Jang and Baek have played against each other numerous times over 10 years on the Korean tour.

“We have played a lot of events against each other,” Baek said through a translator, adding that she and Jang played together on the South Korean national team. “We have a pretty good friendship. I am just one shot behind Ha Na. The main focus is to keep my temper down, and try to stay calm and play as best golf as I can and stay positive.”

Defending champion Lydia Ko, ranked No. 2 in the world, was 9 under after a 67 in a group that included top-ranked Inbee Park. Ko also was second, two shots off the lead last year.

“It’s great to be back,” Ko said. “I don’t mind the position I’m in right now. It’s great to return to a course where you’ve played well. There is a little bit of expectation and a lot more people recognize you and you kind of get that support. So there are pluses and minuses.”

Ko said the putts started dropping for her in the second and third rounds.

“I’ve been hitting it pretty solid so I’ve been trying to give myself plenty of opportunities,” Ko said.

“It was a long day,” Park said. “But no bogeys today, which is really good. I feel like I have played pretty solid the last couple of days. I still feel I left a few out there. I am satisfied where I am.”

Chella Choi, Austin Ernst and Shanshan Feng were tied with Ko and Park.

Choi had a 65, the best round of the day. She started her round with a bogey, but then made seven birdies, including three of the last four holes.

“Actually, my shot is good, but I don’t make that (many putts),” Choi said. “So just one birdie Thursday. But yesterday and today my shots really good and made more putts.”

Ernst, who had five birdies, finished her second round with a double bogey for a 66, but was able to wide out that memory and play a solid third round.

“I just said it was one bad swing and then – you know, just made a bad swing and a bad putt,” Ernst said about her double bogey. “So really over the last two days that’s the only blemish on the card.

“I am hitting it well. I just need to make a few putts.”

Third-ranked Stacy Lewis was tied for 23rd at 5 under after a 69.

Alena Sharp shot a 4-under 67 today and is currently T8 but only 3 shots back of Ha Na Jang’s lead heading into tomorrow’s final round.