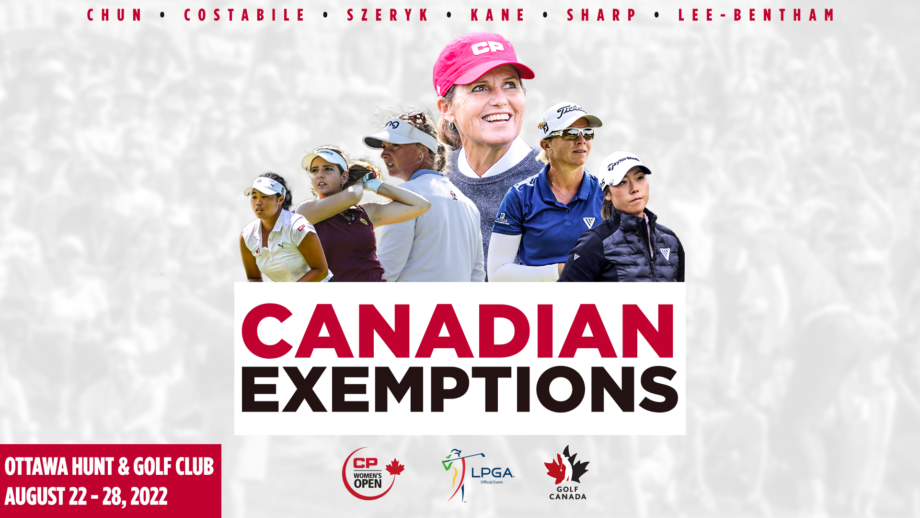 OTTAWA, Ont. – Golf Canada, in partnership with the title sponsor Canadian Pacific (CP), announced today the names of 14 players that have earned tournament exemptions into the 2022 CP Women’s Open, August 22-28, at the Ottawa Hunt and Golf Club in Ottawa, Ont.

Lorie Kane headlines the list of 11 Canadians who have earned exemptions into the 2022 championship. The CP ambassador confirmed in late June that her record 30th career appearance will also be her final go around as a player at the CP Women’s Open. A member of the Canadian Golf Hall of Fame and Canada Sports Hall of Fame, Kane made her debut at Canada’s National Women’s Open Championship in 1991 and has played in each of the 29 tournaments since. In 2019, the Charlottetown, P.E.I., native broke the record previously held by World Golf Hall of Famer JoAnne Carner for the most all-time appearances at the event.

Joining Kane in the nation’s capital in late August will be LPGA Tour veteran, Alena Sharp. The Hamilton, Ont., native recorded a top-10 finish at the Dow Great Lakes Bay Invitational in mid-July. Sharp will be making her 17th appearance at the National Open Championship where she posted a career-best 4th place finish in 2016.

Also accepting invitations to the championship are a foursome of Team Canada Young Pro Squad members and Epson Tour professionals: Rebecca Lee-Bentham of Toronto, Megan Osland of Kelowna, B.C., Maddie Szeryk of London, Ont. and Selena Costabile of Thornhill, Ont. The 30-year-old Lee-Bentham, in the midst of a career resurgence, will be returning to the CP Women’s Open for the first time since 2016. Osland will be making her third CP Women’s Open appearance having recently qualified for the US Women’s Open Championship as well as the LPGA Tour’s inaugural Palos Verdes Championship in April. Szeryk, who has posted five career top-10 finishes on the Epson Tour since her rookie season in 2019, will be making her seventh appearance at the CP Women’s Open while Costabile, who currently leads all Canadians on the Epson Tour money list, will make her debut at the CP Women’s Open.

Team Canada’s National Junior Squad will be represented by a pair of budding stars in Katie Cranston and Lauren Zaretsky. Cranston, 18, of Oakville, Ont., was crowned champion of the 2022 Women’s Porter Cup and will make her first appearance at the professional ranks. A unique consideration for 2022—following two years of event cancellations due to the COVID-19 pandemic—Golf Canada will honour select exemptions that were previously earned since the last CP Women’s Open was hosted in September of 2019. That leads to Zaretsky, the 2021 Canadian Women’s Amateur Champion, who did not get a chance to play in a CP Women’s Open last year due to the event cancellation. The 18-year-old from Thornhill, Ont., is coming off a T17 finish at the U.S. Junior Girls Championship and will be playing in Canada’s National Open Championship for the first time.

“Together with CP we are very proud to welcome this exceptional group of Canadian and international athletes to the celebrated return of the CP Women’s Open,” said Tournament Director Ryan Paul. “Extending playing opportunities through tournament exemptions has always been an important component of the CP Women’s Open and we are very pleased that these talented amateur and professional players can join us at Ottawa Hunt for the 48th playing of Canada’s National Open Championship.”

The field will include seven past CP Women’s Open champions, and 13 of 17 in year winners including all five 2022 LPGA Tour Major winners.

The final field including additional exemptions (excluding Monday qualifiers) will be confirmed on Tuesday, August 16, 2022. Four spots will be up for grabs at the Monday qualifier which will be played at The Marshes Golf Club in Ottawa, Ont., on August 22.

CP HAS HEART CHARITY CAMPAIGN TO BENEFIT THE CHEO FOUNDATION:

Canadian Pacific and Golf Canada are proud to support the Children’s Hospital of Eastern Ontario (CHEO) Foundation as the primary charitable beneficiary for the 2022 Canadian Pacific Women’s Open. Among the charitable engagements tournament week will be the Birdies for Heart hole on no. 15 at Ottawa Hunt with $5,000 donation made for every birdie made on the hole during the four rounds of the competition. In addition, CP is also proud to support a community beneficiary in the Perth and Smiths Falls District Hospital Foundation in support paediatric cardiac care. In the nine years of CP’s title sponsorship of the CP Women’s Open, more than $13 million has been raised to support children’s heart health in Canada.

Golf Canada is pleased to introduce the fan-favourite Rink hole spectator experience to the CP Women’s Open for the first time. The energetic hockey-themed hole, complete with fan-pounding rink boards, volunteers dressed as referees and a surrounding hospitality experience will be situated on par-3 17th hole at Ottawa Hunt.

The 2022 CP Women’s Open will feature four days of domestic and international television broadcast coverage including Canadian broadcast partner TSN as well as international coverage on GOLF channel. For the first time ever, the CP Women’s Open will also be broadcast on US network television with Sunday’s final round coverage on CBS. A full schedule of TV Times and on course activities can be found at www.cpwomensopen.com.

KIDS 12-AND-UNDER GET IN FREE…

Golf Canada and CP are committed to offering a fan friendly, family event with the CP Women’s Open. To introduce more juniors to the sport, children aged 12-and-under get FREE admission to the CP Women’s Open for the entire week.

Spectators at Ottawa Hunt will experience the CP Women’s Open like never before by downloading the Golf Canada Mobile App on their iOS or Android device. Essential features include a live map, mobile ordering, leaderboard & pairings, tickets, breaking news, and unique events. Golf enthusiasts can also use the Golf Canada Mobile App to enhance their everyday golf experience while playing! Find golf courses, track your game, set up matches against friends, access GPS yardages and more. Click here to download.